Positioned near to Jerusalem’s 1967 ‘Green Line’ that divides the east from the west, sits Imbala – a café unique to others in the... 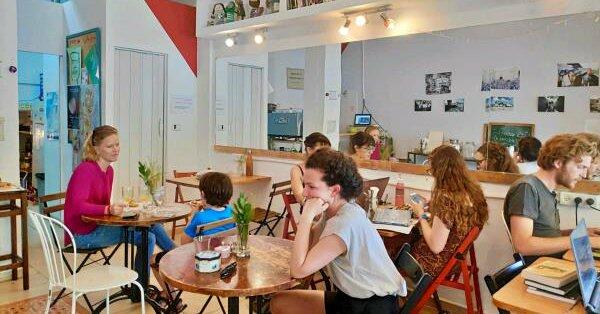 Positioned near to Jerusalem’s 1967 ‘Green Line’ that divides the east from the west, sits Imbala – a café unique to others in the city.

The bright, light-filled venue was opened at the beginning of last year by a handful of activists with the aim of creating a communal space for co-resistance against the Israeli occupation.

The self-sustainable collective describes itself as feminist, anti-racist, multi-lingual, multi-generational and vegan, and operates as a combined café, library and event space. It now boasts more than 70 members, and has become an integral space for left-wing activists in the city who say they face increasing hostility.

The word ‘Imbala’ in Hebrew means ‘if she wills it’ and in Arabic it means ‘actually yes’ – a message of empowerment in both languages.

The cooperative wanted Imbala to deliver a strong political statement and that is reflected in the choice of books that line shelves throughout the space, and the posters and stickers on the walls.

Colourful bunting has been hung across Imbala’s big glass windows and fresh flowers add decoration to the wooden tables.

The menu is printed in English, Hebrew and Arabic. For 20 NIS patrons can create their own delicious sandwich from a range of ingredients including smoked tofu, antipasti, chickpea omelette or avocado, and beetroot tahini, pesto, dried tomatoes or hot chilli paste.

Or, they have the option of fresh salads, vegetable dishes and omelettes. There are also freshly squeezed juices, tea or coffee, and a range of alcohol options.
Outside, a white canopy offers customers a weather-proof seating space for customers to enjoy, particularly when the sun is shining.

Sahar Vardi, 28, is one of Imbala’s founding members. She was raised in a Jewish Israeli family in Jerusalem and currently works for Quaker organisation American Friends Service Committee, where she manages a programme that aims to counter militarisation in Israeli society.

Activism has been a central part of Vardi’s life from a young age – particularly since the second intifada, which began in 2000, when her father became more politically active, she says.

“It went from attending nice days planting trees, gradually getting to know more people in those circles, to then finding yourself in more and more radical spaces,” Vardi tells The New Arab.

“My father joined protests against the wall, so resistance was a big part of my experience growing up.”

She says Imbala was borne out of a need for independent spaces open to everyone, where people can connect, share ideas and hopefully challenge Jerusalem’s status quo.

“Jerusalem is not the easiest place to live as an activist,” says Sahar. “Anti-occupation, LGBT rights, animal rights – are all campaigns developing at a much greater rate across the whole country in comparison to Jerusalem.

“A lot of people talk about the shrinking space of civil society but we felt the physical space was deteriorating.”

Imbala’s independence is fundamental to its success, says Vardi, who believes donors and sponsors could try to implement their own, or authorities’, agendas.

An example of why this is so crucial came last summer, when an Israeli judge approved the eviction of a Jerusalem art gallery from municipality-owned premises following a series of events held there deemed to be politically controversial. The decision has since been appealed and a final verdict is set to be delivered this month.

Vardi points out the uniqueness of Imbala; she says other collectives can be found in the city but nothing like what they are trying to achieve.

Unlike most other spaces, the café is not run like an ordinary business and so does not face the same limitations and is free to make political statements, she explains.

That’s not to say the café is completely secure, says Vardi, who highlights the venue’s glass frontage could be vulnerable to attacks.

She also recalls when the police were called ahead of an event at Imbala, where a Palestinian woman from Gaza was due to talk about the realities of living in the besieged enclave.

“The police turned up and took photographs of everything. They told us they’d get an injunction order and we said ‘it’s worth it, it’s what were here for’,” says Sahar.

“But the bottom line was there was nothing they could do and the event was packed.”

Ensuring Imbala remains self-sustainable requires each of its members to volunteer one day a month during the four days it is open to the public each week.

Throughout the remainder of the week the venue is used as a community space for activities including film screenings, language exchanges, lectures and general member use. Imbala also acts as a meeting point for those joining demonstrations against Palestinian evictions in East Jerusalem.

Guest speakers have included activist Reuven Abergel, co-founder of protest group The Black Israeli Panthers, researcher Aviv Tatarsky who spoke about Temple Mount amid rising tensions at the site, and ecologist professor Tamar Keisar who delivered a talk on bees.

Also, among Imbala’s guest speakers was 36-year-old Yehuda Shaul, founder of Breaking the Silence – an organisation, established in 2004 by former soldiers who served in Israel military that campaigns against the occupation.

He believes spaces like Imbala are very important and explains how his organisation has been increasingly targeted by the authorities in recent years.

“I cannot think of one event in the last three-and-a-half years where we’ve tried to deliver a lecture in a space [across the country] that is owned by the municipality and we’ve not had intervention from a mayor or minister to try and cancel it,” he tells The New Arab.

Last year, a law dubbed ‘Breaking the Silence bill’ – its purpose to ban any group critical of the Israeli authorities from giving lectures in schools – was passed by the country’s parliament.

“A lot of what we’ve seen in the last three years, is rhetoric and now we’re seeing a move from rhetoric into action,” says Shaul.

“Israel’s going through transformation. Fifteen years ago, we might not have necessarily believed it but the government’s message was ‘we want peace’. However today, at best we’re looking at permanent occupation, at worst, annexation without equal rights – essentially apartheid. And I believe this is just the beginning. This is not just a bumper sticker campaign, no, this is really deep.”

Imbala’s doors are open to everyone, and its positioning close to Jerusalem’s Old City in the east was to ensure Palestinians have easy access, however, it is deliberately not a joint Israeli-Palestinian venture. The number of Jewish Israelis who describe themselves as left-wing has almost halved in the last 15 years to just 12 percent, indicates the Israel Democracy Institute.

Meanwhile, those who identify as right-wing has increased from 40 percent to 56 percent over the same time frame. And the number of those who consider themselves to be centrists has remained fairly unchanged at 26.5 percent.

The collective believes this approach ignores and normalises the structures of privilege and power that operate throughout the country, says Vardi.

She says the cooperative is committed to its original purpose, even if that means they might face challenges down the line. It also plans to open a youth group in a bid to encourage the younger population to engage with activism.

“We’re not bullet proof but it’s really empowering to say ‘no matter what, this is happening’,” says Vardi.