BEIJING — A little over two months after Huawei’s chief executive began comparing his embattled company to a bullet-riddled fighter plane, the Chinese tech... 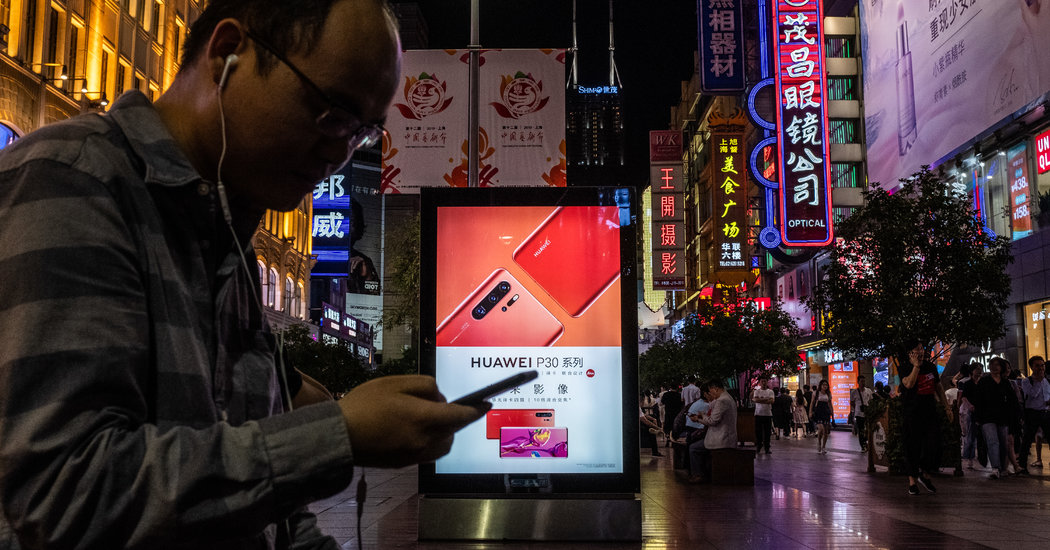 BEIJING — A little over two months after Huawei’s chief executive began comparing his embattled company to a bullet-riddled fighter plane, the Chinese tech giant said its sales for January through June grew by nearly a quarter from a year earlier, a sign that the Trump administration’s clampdown has hardly brought the firm crashing to the ground.

“Neither production nor shipment has been interrupted, not for one single day,” Liang Hua, the chairman of Huawei’s board of directors, said on Tuesday at the company’s headquarters in the southern city of Shenzhen. “No matter how many difficulties we might face, we remain confident in the company’s future development.”

The strong results, with revenue of around $58 billion for the first half of the year, testify to the breadth of Huawei’s business, which now spans smartphones and laptops, equipment and software for wireless networks, cloud computing services, city surveillance gear and more. Last year, the company generated around $105 billion in sales, more than China’s two best-known internet giants, Alibaba and Tencent, combined.

But Huawei’s future has been uncertain ever since Washington began ratcheting up efforts to undermine the company, saying that its products are dangerously susceptible to influence and disruption by the Chinese government. Huawei rejects the insinuations.

Its fate is now entangled with talks between the United States and China to end their yearlong tariff war. As those negotiations have swung between optimistic highs and gloomy lows, so too has the outlook for Huawei’s business.

The company is not publicly traded, but it periodically releases financial results to counter Washington’s claims that it is secretive and opaque.

After American officials spent months warning the world about the risks of using Huawei’s equipment to build next-generation wireless networks, the Commerce Department took direct aim at the company’s operations in May by putting it on an export blacklist. This meant that American companies like Qualcomm and Intel would need special permission to sell Huawei the microchips and other specialized components that go into its products.

American tech suppliers swiftly halted shipments to Huawei in response. The Chinese company’s founder and chief executive, Ren Zhengfei, predicted in June that revenue this year would be around $30 billion less than previously forecast. That gap alone represents more revenue than Ericsson, one of Huawei’s main rivals in telecom equipment, took in all year in 2018.

Before long, though, some American tech companies decided that they could resume selling certain items to Huawei despite the blacklisting. Their lawyers determined that Washington’s restrictions did not apply to hardware that was manufactured outside the United States and that did not contain much in the way of sensitive American components and technology.

“Once we determined that we could continue to resume most of those products, it really got back to normal pretty quickly,” Dave Pahl, the head of investor relations at the chip maker Texas Instruments, said during a conference call with analysts last week.

Then, after meeting with China’s top leader, Xi Jinping, in Japan last month, Mr. Trump said the administration would permit more American sales to Huawei, in a gesture meant to smooth the path toward a trade deal.

Huawei cannot breathe easy, however. The Commerce Department still has not indicated exactly how it will decide who gets licenses to sell to the company. American trade negotiators were in Shanghai on Tuesday to try once more to piece together an accord.

Some of Huawei’s American partners have already started making potentially hard-to-reverse changes to their operations in response to the blacklisting. The electronics manufacturer Flex said last week that it had scaled down its activities in China for supplying Huawei.

For many years, Huawei’s chief executive, Mr. Ren, was a reclusive figure who almost never spoke to reporters. Of late, he has been a near-constant presence in the global news media, sounding exuberant about his company’s prospects for surviving Mr. Trump’s onslaught.

Speaking this month with a group of Italian journalists, Mr. Ren boasted that Huawei had already patched up 70 to 80 percent of what he called the “bullet holes” in its wireless infrastructure products — the ways in which they relied on American-sourced parts or technology.

By the end of the year, he predicted, Huawei will have filled more than 90 percent of these holes.

“We can stand on our own right now,” Mr. Ren said. “We don’t need to depend on the U.S. to continue serving our customers. The more advanced a system is, the more capable we are of standing on our own.”