Human rights lawyers in Egypt say authorities arrested at least 400 people during weekend demonstrations in Cairo and elsewhere around the country where protesters... 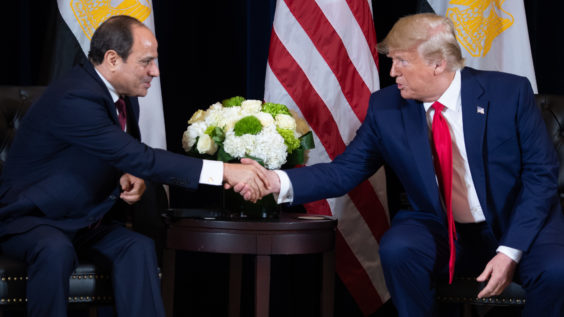 Human rights lawyers in Egypt say authorities arrested at least 400 people during weekend demonstrations in Cairo and elsewhere around the country where protesters called for the ouster of President Abdel Fattah el-Sisi. The Interior Ministry is so far mum on the number of people detained or still in custody. Public protests have been illegal since the start of Sisi’s presidency in 2014. The anti-Sisi unrest stemmed from online claims of corruption against the president and senior members of the country’s military leveled by an Egyptian businessman living in self-exile in Spain, whose video postings have gone viral. The businessman has called for mega-rallies around the country this Friday. Sisi is currently in New York to attend the opening of the 74th session of the UN General Assembly. He met on Monday night with US president Donald Trump, who expressed support for his Egyptian counterpart. “No, I’m not concerned with it,” Trump later told reporters, referring to the protests. “Egypt has a great leader.” Sisi has denied the claims of corruption and when questioned by reporters in New York, blamed the unrest on “political Islam.” He came to power after deposing president Mohamed Morsi, a member of the Muslim Brotherhood who was elected in the country’s first democratic national vote following the ouster of strongman Hosni Mubarak.