How will the Joint List Fare in Israel’s Snap Election?

Members of the Joint List alliance in happier times on election night in 2015; Ayman Odeh, centre, is heading a reunited alliance into Israel’s... 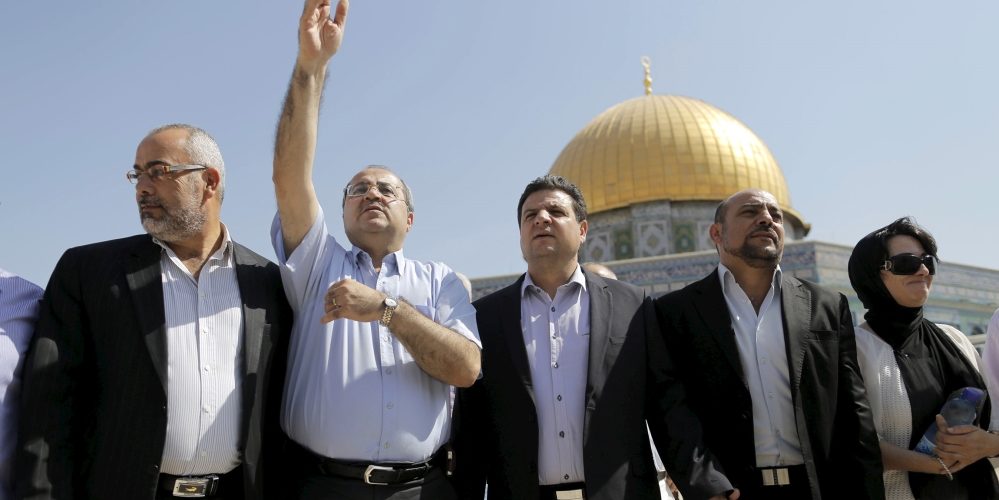 Less than six months since Israelis went to the polls, September 17 will see a fresh national election after Prime Minister Benjamin Netanyahu failed to secure a governing coalition last time around.

For Israel’s myriad political parties, the unusual rerun represents an opportunity to correct strategic errors made during the April vote.

Those hoping to benefit include parliamentarians representing Israel’s Palestinian citizens. Before April’s vote, an electoral alliance of four smaller Palestinian parties had split into two competing pair-ups, leading to a weaker-than-expected showing in the polls as the Hadash-Taal alliance picked up six seats, while the United Arab List-Balad bloc won four.

But legislators from all four parties have reformed the Joint List alliance ahead of next month’s polls in a bid to boost voter turnout in the Palestinian community and secure more seats in the Knesset.

When the same parties combined on a single slate for the 2015 election, the alliance secured 13 seats, making it the third biggest bloc in the Knesset at the time.

The disintegration of the Joint List began in February when Taal’s Ahmad Tibi announced his party would run independently. Soon afterwards, the rest of the list fragmented.

As well as ideological differences, much of the infighting within the Joint List had centred around the allocation of Knesset seats to the constituent parties. The dismal showing in April, however, convinced the four parties of the need to reunite, which they eventually did.

“It was clear that our people punished us for splitting apart,” Haneen Zoabi, stepped away from national politics this year after a decade in the Knesset with the Balad party, told Al Jazeera.

Amjad Iraqi, a policy analyst at Al-Shabaka think-tank, told Al Jazeera “the parties realised early on that they had made a grave mistake by breaking up the List.”

In the days preceding the April vote, “party members were in panic trying to get Palestinian citizens out to vote”, he said. “Though the two slates managed to scrape past the threshold, the damage was evident,” he added. 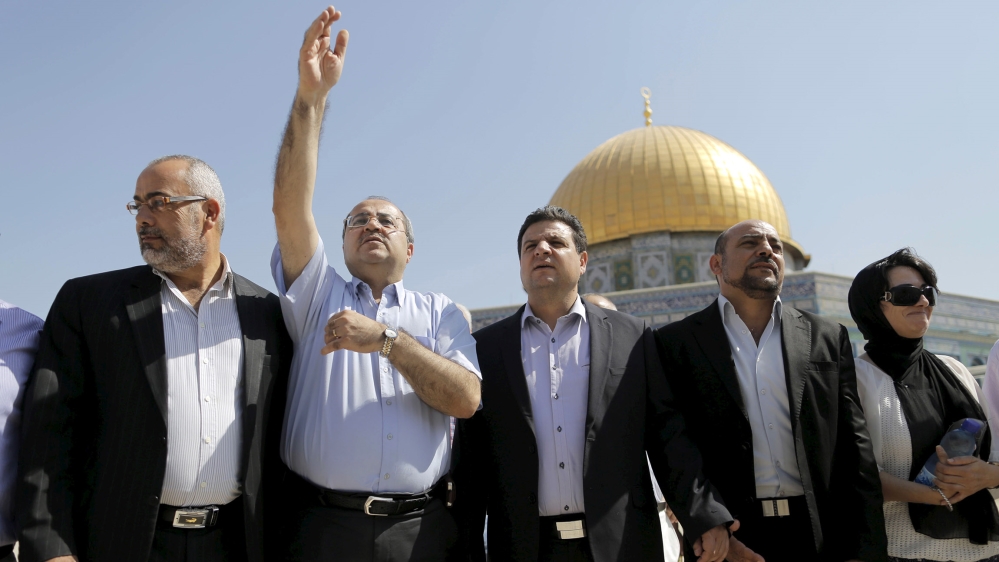 Legislators of the Joint List, left to right, Osama Saadi, Ahmed Tibi, Ayman Odeh, Masud Ganaim and Haneen Zoabi stand in front of the Dome of the Rock in 2015 [File: Ammar Awad/Reuters]

But analysts and voters are sceptical as to whether the newly-reconstituted Joint List will repeat the success of 2015.

Ibrahim, from Nazareth, voted for Hadash-Taal in April and says he will vote for the Joint List this time, despite frustrations with recent events.

“I think everyone is disappointed with what happened,” the 33-year-old told Al Jazeera. “They should concentrate on actually representing us, instead of focusing on getting more seats for each party.”

“This is the last chance I will give them,” he said, adding that he did not expect them to get as many votes as in 2015.

Opinion polls have offered divergent assessments of how things may pan out in the September 17 vote.

“The [opinion] polls are not really an indicator as we are still far away from election day,” Diana Buttu, an analyst and Palestinian citizen of Israel, told Al Jazeera.

“The parties of the Joint List promised that they would unite by the end of June and yet it took a full month, with one party signing on at the last minute, for them to unite,” she added.

“This sent the message that there were still disputes between them, leaving the impression that they were more concerned about party politics and not with national interests.”

Awad Abdel Fattah, former secretary-general of Balad, said there is no guarantee that reunification “will yield as good an outcome as 2015”.

“Much damage has been caused to the reputation and standing of the List and the parties as a result of the sharp disagreements and the mutual accusations that accompanied the efforts to restructure the Joint List,” he told Al Jazeera.

Given how finely balanced the election appears, with Likud and Blue and White polling neck and neck, a scenario could emerge in which the Joint List plays a role in Netanyahu’s removal. 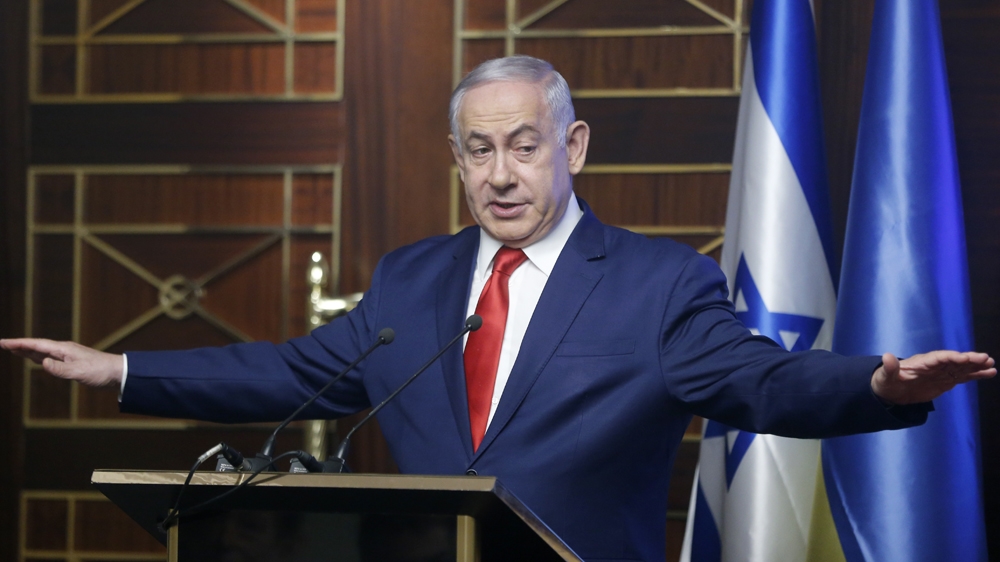 “The debate among the Arab parties is how they expect to achieve the removal of Netanyahu with so little political power … and to what extent they are willing to support opposition Jewish parties like Blue and White in forming a coalition government,” said Iraqi.

“The latter question is particularly contentious to answer as the Israeli centre-left increasingly adopts the hostile policies and rhetoric of the right,” he added.

The parties representing Palestinian citizens have never been a part of any government in Israel, although, in the 1990s, some lent their support to Yitzhak Rabin’s coalition without formally joining.

Last week, Joint List leader Ayman Odeh (of Hadash) caused a stir when the Yedioth Ahronoth newspaper published his comments that he would be willing to join a Blue and White-led coalition, provided certain conditions were met. The remarks were apparently made without consulting the other Joint List parties, and the proposal was quickly rejected by senior Blue and White figures.

According to Abdel Fattah, for the Joint List to support Blue and White “as a way of getting rid of Netanyahu and obtaining some of the demands of Palestinian citizens” would be a “bad development”.

He acknowledged, however, that “a changing mood of sections of the Palestinian citizens in favour of a more pragmatic trajectory” – which he attributed to “frustration and disillusionment with Israel’s increasingly aggressive policies and a weakening Arab world” – could “prepare the ground” for such a scenario. 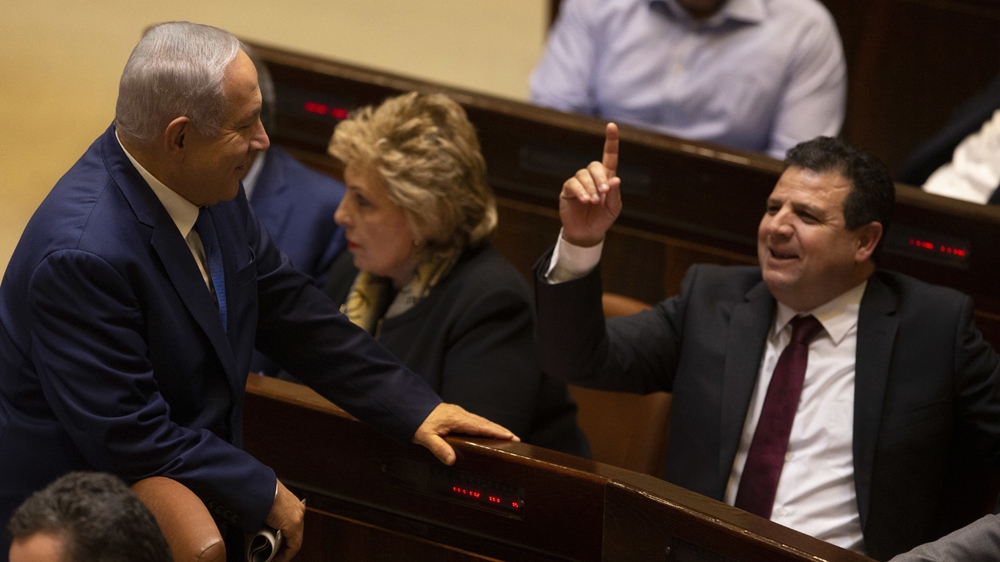 In this 2018 picture, Netanyahu speaks with Odeh in the Knesset [File: Sebastian Scheiner/AP]

“Getting rid of Netanyahu without explicitly opposing Gantz and all the centre-left Zionists would give the wrong impression”, Zoabi said.

“Our main message is that the right-wing extremists reinforced their role through the silence and the fear of the centre to introduce an alternative, to the extent that they become a pale imitation of the right,” she told Al Jazeera.

Get out the vote

While it remains an outside possibility that the Joint List would play a role in the formation of a new government – let alone be invited to do so – its main focus will be on getting the vote out.

In April, voter turnout among Palestinian citizens dropped below 50 percent, with many boycotting the election, and others casting their votes for Meretz, a left-of-centre Zionist party. In 2015, the Palestinian voter turnout was 63 percent, a sharp decline from its zenith in 1999 of 75 percent.

“First, that Palestinian political parties would need to unite to regain voter confidence, and second, that they would need to show both the outcome of their work while distinguishing themselves from the Zionist parties such as Meretz,” she said.

For some voters, the Joint List has done enough to win their support. Narmeen, 30, from Kafr Kanna, told Al Jazeera she believes that the Joint List “can successfully represent all of our diverse community, and also attract those who are not really affiliated to any particular party”. 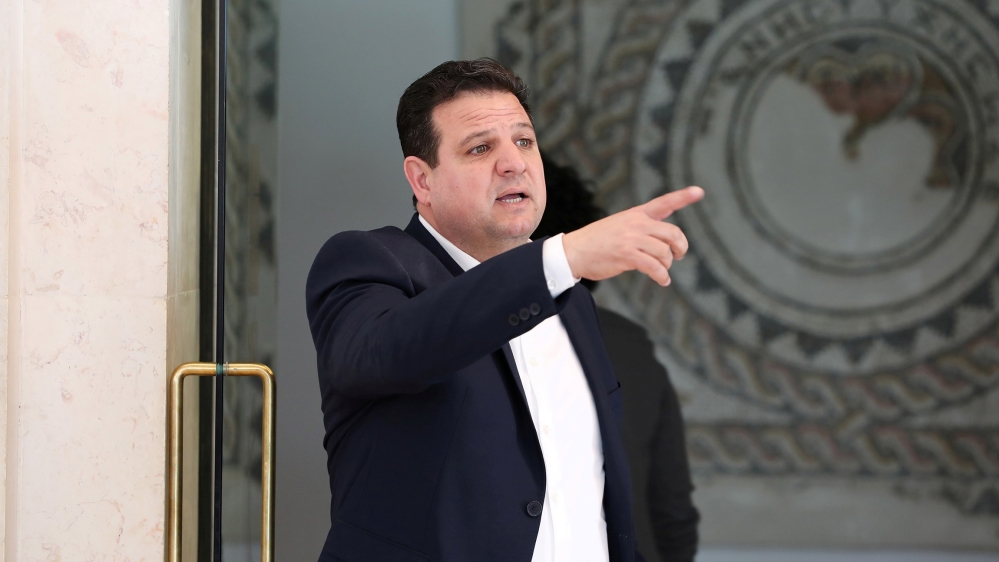 Ayman Odeh points as he stands near a door at Israel’s Supreme Court in Jerusalem [File: Ammar Awad/Reuters]