In Morocco they call the month of Ramadan “Sidna Ramadan” because it is the best month of the year, and they receive it with... 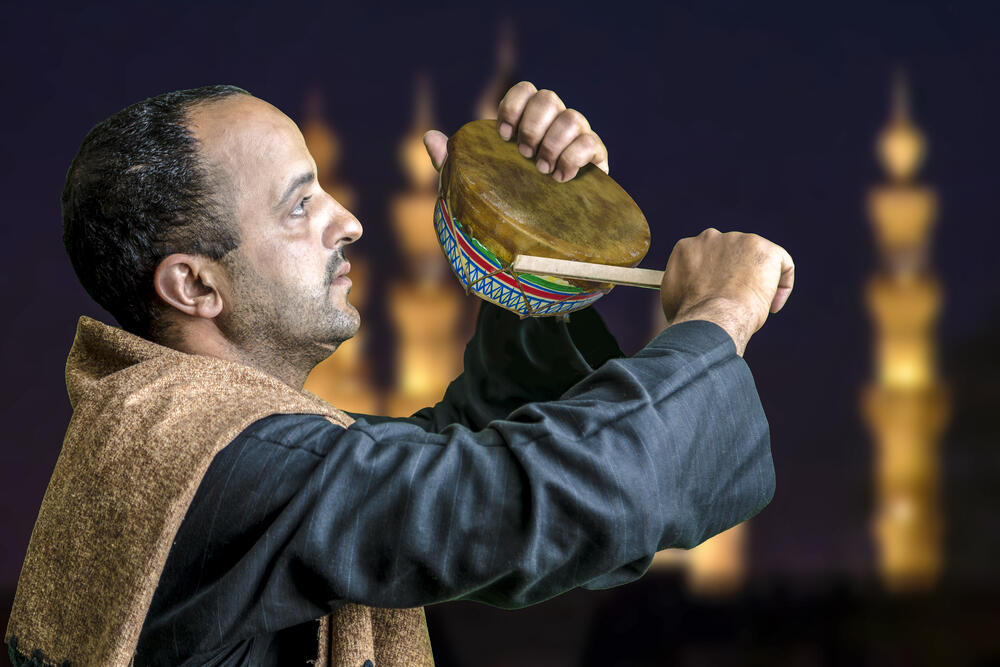 In Morocco they call the month of Ramadan “Sidna Ramadan” because it is the best month of the year, and they receive it with decorations in all houses and shops, and close cafes and restaurants during the day.

In the past, women gathered on rooftops waiting to see the first moon of Ramadan, and the joy of the arrival of a dear guest on the people of Fez, followed by the “Nafar,” carrying a long pipe blowing seven puffs in either the mosque silo or walking through the streets of the old city and its old elegance announcing the coming of the holy month.

Once the crescent has been confirmed, Moroccans start exchanging greetings, saying: “Awashir Mabrouka”. The phrase is spoken in Moroccan colloquial meaning “blessed days”. It means dividing the month into 10 days for mercy, 10 for forgiveness, and 10 for freeing hell.

Newspapers and books are enjoying great popularity in the holy month, as Moroccans are more interested in reading.

It is also a special practice to play sports between Asr (afternoon) and Maghreb (sunset) for everyone.

They are good moments of entertainment. Weeks before Ramadan, the people of Morocco prepare their dishes and traditional clothing for decorations at each mosque.

One of the most important customs of the people of Morocco is gathering on the first day of Ramadan in the house of the father or grandparent of the family.

The Moroccan housewife is very interested in decorating the house and preparing it to receive guests from the family and neighbours. The house is adorned with natural flowers and green herbs.

One of the most popular customs of the month of Ramadan is the celebration of the first fasting of the children on the day of Ramadan, especially on the 27th of it. Celebrating this day is a manifestation of traditional Moroccan customs.

If the fasting child is a girl, she eats dates with her family, but in north Morocco, the child would eat a date on a wooden ladder to highlight ascending from fasting. Girls under puberty are characterised by a new dress, which is a traditional Moroccan women’s dress. Their hands are covered with henna inscriptions and their small bags are filled with dates, walnuts, and nuts.

The most important Ramadan dishes are Harira, or soup with vegetables, and the couscous is served every Friday in different ways. Grilled meat with tomato sauce is also served. As for the Moroccan iftar (braking the fast), Harira comes first. It is a sign of Ramadan, so they are considered the main dish for iftar. It is a mixture of a number of vegetables and spices served in traditional dishes called “Zlayev.” They add dates, milk, and eggs. Ramadan desserts are common, including “Shabakia” and “Sefof”, as well as dates.

During the holy month of Ramadan, Morocco organises collective iftars arranged by some charities, Islamic and otherwise, which are supported by the state.

The night before Ramadan is named “Kersh Night” and the celebration of the holy month begins before it is received. The month of Ramadan is celebrated as the month of weddings. Girls are engaged and given gifts on the 27th night, which is referred to as the season.

Some families also celebrate Lailat al-Qadr with the circumcision of their children by organising religious events prepared by Muslim groups until the time of suhoor (last meal before fasting).

Families from the wealthy classes organise nights called “Salameh” to mark the month of Ramadan. “Salameh” is a group of religious songs of Sufis. These celebrations are restricted to men. Women sometimes participate from afar.

It is customary for Tunisians to break the fast with dates and milk, perform Maghrib (sunset) prayer, and then return to the iftar table, which is characterised by Ramadan specials. Tunisians begin Ramadan iftar with the words “Sehat Sherbetkom”, which means health and wellness.

And the most important dishes on the Tunisian table is the Tajine in different types. Tajine is a popular dish that differs from one area to another.

The most important dessert dishes are “Raffees”, made of rice cooked with dates and raisins, or “Madmouga” made of sheets of fried dough, fragmented and stuffed with dates and sugar. In the north-west of Tunisia, porridge is prepared with flour, ghee, and honey. In the coast, pies are made with raisins. “Barracuche” is thick flour granules cooked with varieties of vegetables.

Before the holy month of Ramadan begins, Algerians greet each other by saying “Sah Ramadankom”. Families begin to prepare and repaint houses, buy new utensils, and kitchen utensils, prepare all kinds of spices, and start shopping for Ramadan sweets such as dumplings, heart almonds, and other sweets.

Algerian families hold special celebrations for children who fast for the first time. Girls wear new dresses and sit as queens. Amidst a joyous celebration of their first fast, they sit in a high place at the time of iftar until they feel the attention and appreciation. Many Algerian families prefer to circumcise their sons on the night of the 27th of the month.

The Algerian table in Ramadan is characterised by a basic dish, Harira, as a soup. It is also unique to serve some foods such as “sweet meat”, a dish made of meat, dried plum, raisins, and rose water, and “Barboche” which is a couscous dish.

In addition to the soup, the bourak and the sweet tajine are appetisers.

For the dawn suhour meal, Algerians mostly eat couscous and “mousouf,” a dried couscous with raisins and yogurt.

Not only are Algerians interested in eating during the month of Ramadan, they are also keen on religious duties and worship, where mosques are crowded during Taraweeh prayers, and musical festivals vary widely, especially in the second half of the month. Many musical societies celebrate with different types of popular and Andalusian music.