Sam FM, a Houthi-affiliated radio station in Yemen, has released a video showing four men celebrating a fundraising campaign that raised some $300,0000 for... 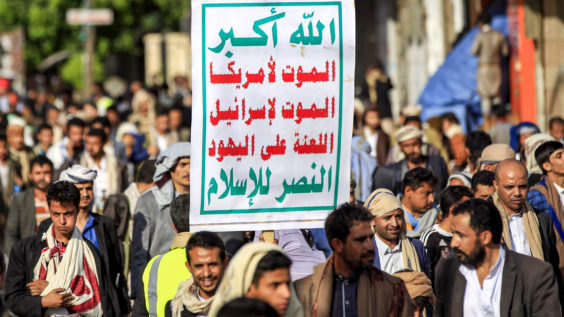 Sam FM, a Houthi-affiliated radio station in Yemen, has released a video showing four men celebrating a fundraising campaign that raised some $300,0000 for Lebanon’s Hizbullah. In the video, Sam FM’s director-general Hamoud Mohammad Sharaf is seen leading the men in a chant: “From Yemen’s faith to Lebanon’s Resistance! God is great! Death to America! Death to Israel! Curses upon the Jews! Victory for Islam!” The station’s fundraising campaign for the Iran-supported Lebanese group ran between May 20 and June 30 after Hassan Nasrallah, the leader of Hizbullah, called on supporters in March to donate money following an increase in sanctions against it. Following a recent statement by Nasrallah, who boasted that Israel could be “wiped out” in a potential war between Washington and Tehran, Israeli Prime Minister Binyamin Netanyahu responded that the Jewish state would deliver a “crushing military blow” to the group if attacked. The United States, United Kingdom, member states of the Gulf Cooperation Council and, most recently, Argentina have labelled Hizbullah, a terrorist organization. The Islamic Republic also supports the Houthi rebel movement against a Saudi-led coalition in the ongoing civil war in Yemen, largely seen as a proxy fight between Riyadh and Tehran.