Lam warned on Tuesday of the risk of pressure on the Hong Kong economy which shrank in April to June Hong Kong’s... 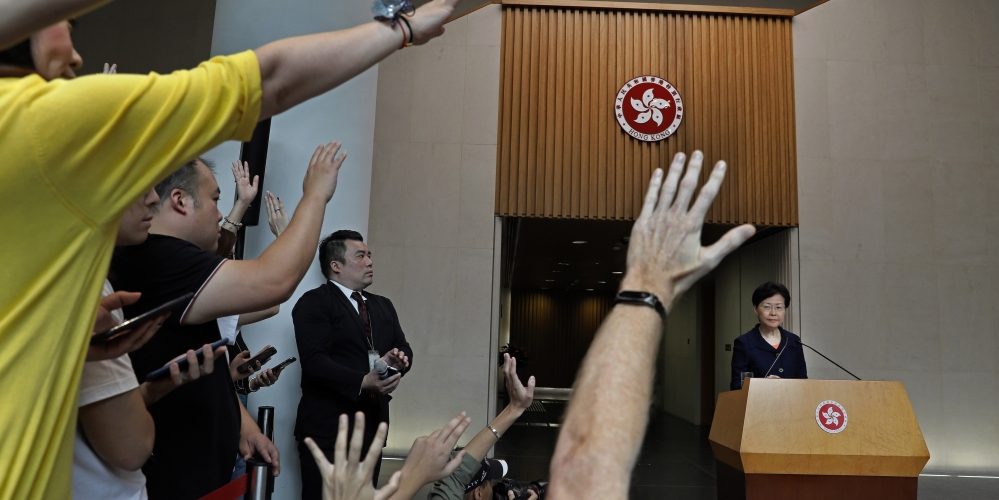 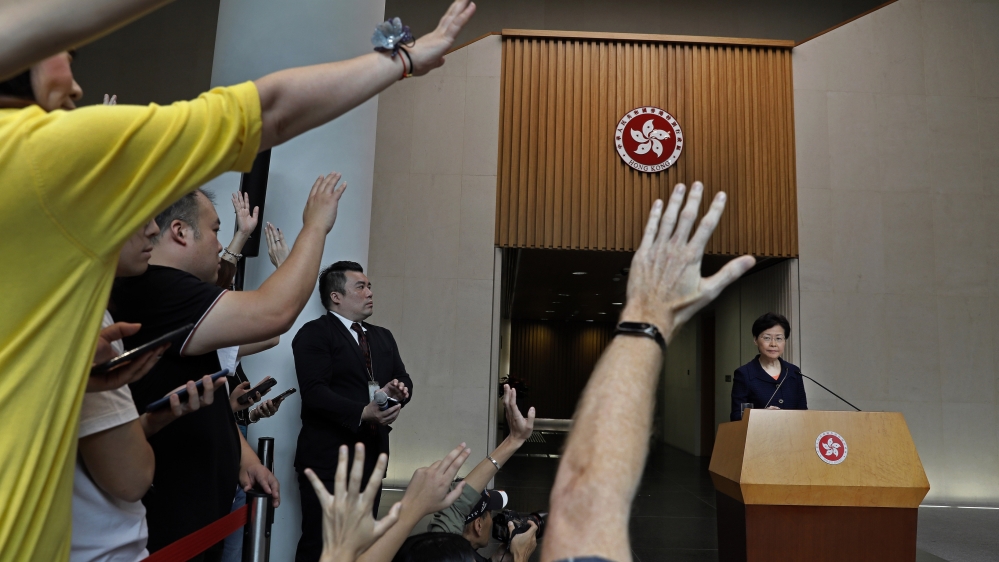 Hong Kong’s Chief Executive Carrie Lam has offered talks with critics of her government, even as she continues to dig in by refusing to address protesters’ demands for her to withdraw the controversial extradition bill, which sparked weeks of often violent demonstrations.

In a press conference on Tuesday morning, Lam announced that her office “will start immediately a platform for dialogue with people from all walks of life”, while vowing to conduct an investigation on alleged police abuse.

“This is something that we want to do, in a very sincere and humble manner,” she said, saying her administration is “committed to listen to what the people have to tell us”.

She also said that she is hopeful that Sunday’s peaceful protest, which drew as many as 1.7 million people out in the streets, would mean that the semi-autonomous Chinese territory is on its way to peace.

While appearing to offer an olive branch to protesters, Lam still refused to say that the extradition bill has been withdrawn.

“I can give you this very clear commitment at the political level, that the bill is dead. There is no plan to revive this bill, especially in light of the public concerns,” she said.

Critics have said that Lam’s declaration of the deal being “dead” has no legal weight, and that she should say the bill is “withdrawn”.

Al Jazeera’s Hoda Abdelhamid, reporting from Hong Kong, said that what Lam did not address is as significant as what she said.

“At the end of the day, it is more important what she didn’t say than what she said,” Abdelhamid said, pointing out that Lam again refused to address the five demands of the protesters.

Our correspondent said that Lam’s latest statement could further spur anger among her critics, and ignite renewed calls for her to resign.

Abdelhamid also said that protesters have no expectations that a government investigation on alleged police abuse would be fair.

“I do not see how the protesters will trust that body.”

Police have been criticised for using increasingly aggressive tactics to break up demonstrations, although there was a minimal police presence on Sunday and no arrests were made. More than 700 people have been arrested since June.

Aside from Lam’s resignation, the complete withdrawal of the extradition bill, and the conduct of an independent inquiry, the protesters are also asking Lam to stop describing the protests as “rioting”, and for her to issue a waiver of charges against those who were arrested.

Anger first erupted in June over the now-suspended extradition bill that would allow criminal suspects in the former British colony to be extradited to mainland China.

But the unrest has been fuelled by broader worries about the erosion of freedoms guaranteed under the “one country, two systems” formula put in place after Hong Kong’s return to China in 1997, including an independent judiciary and the right to protest.

Further protests are planned in the next few days, including one by MTR subway workers on Wednesday, secondary school students on Thursday and accountants on Friday.

Meanwhile, Lam warned of the risk of pressure on the Hong Kong economy which shrank 0.4% in April-June from the previous quarter.

“The Hong Kong economy is facing the risk of downturn,” she said.

Secretary for Financial Services and the Treasury James Lau also said in a radio interview that the likelihood of recession was “quite considerable”.