Masked pro-democracy protesters marched through Hong Kong in defiance of a ban on face coverings as the city ground to a halt on Saturday,... 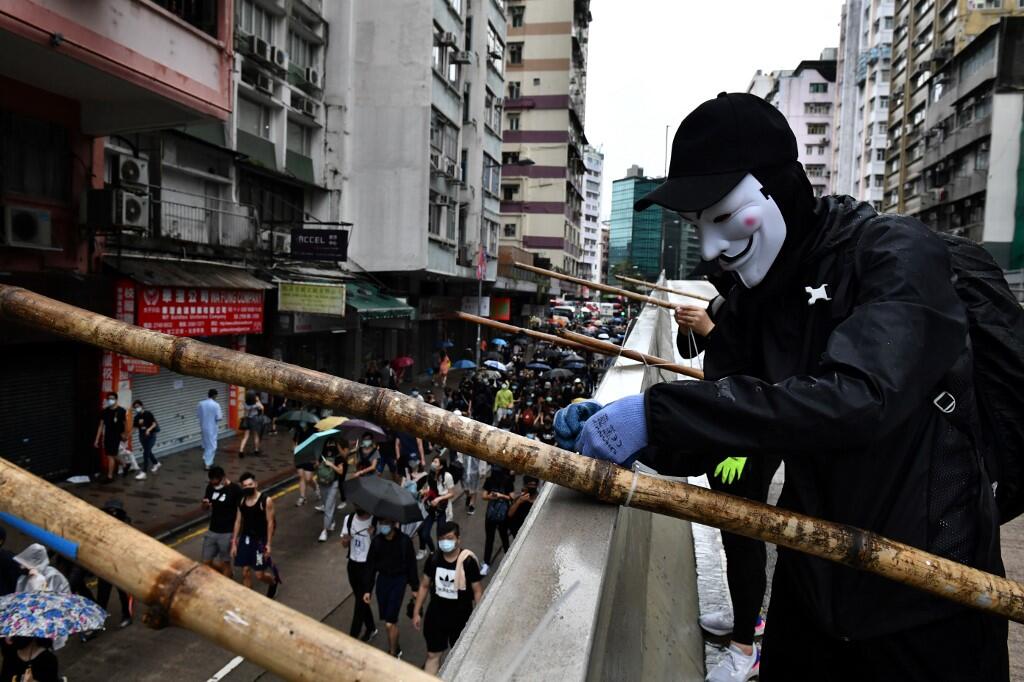 Masked pro-democracy protesters marched through Hong Kong in defiance of a ban on face coverings as the city ground to a halt on Saturday, with the subway suspended and many shops shuttered following another night of violence.

Thousands of protesters staged unsanctioned marches and flashmob protests at multiple locations, a day after the city’s leader outlawed masks at protests, invoking colonial-era emergency powers not used for half a century.

The marches came as a group of pro-democracy politicians filed a legal challenge against the government’s use of the law, which triggered an overnight rash of widespread violence – including the starting of fires and attacks on an off-duty police officer who fired a live shot in self-defence that injured a 14-year-old boy.

As the crowds began marching, city leader Carrie Lam released a stony-faced video statement in which she condemned protesters for ‘a very dark night’.

‘We cannot allow rioters any more to destroy our treasured Hong Kong,’ Lam said as she called on citizens to distance themselves from the more hardcore protesters.

Throughout the afternoon and evening crowds gathered in masks, most of them moderates without the helmets and body armour worn by more radical protesters.

It comes a day after a night of chaos which saw 14-year-old boy get shot by a police officer, who said he fired at the teenager after having a petrol bomb thrown at him.

The boy is still in hospital and is in a stable condition.

The mask ban that came into effect at midnight on Friday triggered mass protests. Two activists failed to obtain a court injunction on Friday against the ban on face coverings, which the government says have made it tough for police to identify radical protesters.

In a second bid, Dennis Kwok said a group of 24 legislators filed a legal appeal to block the anti-mask law on wider constitutional grounds.

He said: ‘This is a Henry the 8th situation. This is basically I say what is law… and I say when that ceases to be law. That’s not how our constitution works.

‘We say that she doesn’t have such powers, that she cannot avoid’ the Legislative Council.

The court will hear the case on Sunday morning.

Ms Lam has said she will seek the council’s backing for the law when its session resumes on October 16, and she has not ruled out further measures if the violence continues.

Mr Kwok said the group also asked the court to rule the emergency law, enacted by British colonial rulers in 1922 to quell a seamen’s strike and last used in 1967 to crush riots, was incompatible with rights and freedoms under Hong Kong’s constitution that was put in place after it returned to Chinese rule in 1997.

Fellow politician Claudia Mo called the Emergency Ordinance a ‘weapon of mass destruction’ that could pave the way for more draconian regulations.

In a televised address broadcast as protesters again marched in masks on Saturday, a solemn Ms Lam described Hong Kong as ‘semi-paralysed’ and reiterated the mask ban is needed to stop the violence.

She added: ‘The government needs to take drastic measures to say no to violence, restore peace in society, protect citizens’ right to continue their daily lives and freedom, not allowing a small group of rioters to destroy it.’

Many shopping centres, shops and the entire MTR network of subways and trains that usually handle more than four million trips a day shut on Saturday following the overnight rampage.

Many peaceful protesters say violence has become a means to an end, the only way for young masked protesters to force the government to bend to clamours for full democracy and other demands.

But the shooting of the teen on Friday night – the second victim of gunfire since the protests began in early June – stoked fears of more bloody confrontations.

An 18-year-old protester was also shot at close range by a riot police officer on Tuesday.

Police said in a statement on Saturday that the 14-year-old, who was hospitalised with a gunshot wound on his thigh, has been arrested for participating in a riot and assaulting a policeman.

Police have said they are still investigating exactly how he got shot.

There were other scattered gatherings, with some holding hands in a long human chain and chanting anti-police slogans in an open-air stadium.

Trouble brewed as night fell, however, with police saying pockets of protesters again blocked roads and vandalised shops and public property in several districts but left before police arrived.

Police said no arrests had been made so far on the anti-mask ban but did not explain why.

Protester numbers Saturday appeared down from previous weekends when tens of thousands flooded the streets. Some marchers said the protest movement that has become a big headache to Chinese President Xi Jinping was merely harbouring strength for the long haul.