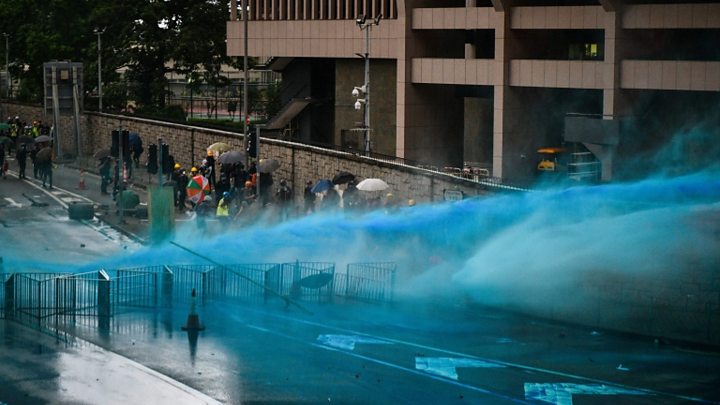 This post was originally published on this site Media playback is unsupported on your device Hong Kong police have used tear gas and water...

Hong Kong police have used tear gas and water cannon to disperse crowds of protesters who defied a police ban and marched through the city.

Demonstrators lit fires and attacked the parliament building as thousands joined the march.

An event to mark five years since Beijing ruled out fully democratic elections was banned by officials and called off by organisers.

On Friday, several key pro-democracy activists and lawmakers were arrested.

The protest movement grew out of rallies against a controversial extradition bill – now suspended – which would have allowed criminal suspects to be sent to mainland China for trial.

It has since become a broader pro-democracy movement in which clashes have grown more violent.

What happened on Saturday?

Protesters took to the streets in the Wan Chai district, many joining a Christian march, while others demonstrated in the Causeway Bay shopping district in the pouring rain. Many carried umbrellas and wore face masks.

In the 13th weekend of protests, demonstrators – chanting “stand with Hong Kong” and “fight for freedom” – gathered outside government offices and the city’s parliament, known as the Legislative Council.

In the Admiralty district, some protesters threw fire bombs towards officers.

Police had erected barriers around key buildings and road blocks, and fired tear gas and jets of blue-dyed water from the water cannon. The coloured liquid is traditionally used to make it easier for police to identify protesters.

Eric, a 22-year-old student, told Reuters news agency: “Telling us not to protest is like telling us not to breathe. I feel it’s my duty to fight for democracy. Maybe we win, maybe we lose, but we fight.”

The recent demonstrations have been characterised as leaderless.

On Friday police had appealed to members of the public to cut ties with “violent protesters” and had warned people not to take part in the banned march.

During a 24-hour police crackdown, at least three activists – including prominent 23-year-old campaigner Joshua Wong – and three lawmakers were detained.

Mr Wong, who first rose to prominence as the poster boy of a protest movement that swept Hong Kong in 2014, was released on bail after being charged over the protests which have rocked the territory since June.

Speaking to the BBC, Mr Wong said: “Organising protests, having assembly on street is the fundamental right of [the] Hong Kong people… People will still gather on [the] street and urge President Xi [Jinping] and Beijing [that] it’s time to listen to people’s voice.”

Hong Kong is part of China, but enjoys “special freedoms”. Those are set to expire in 2047, and many in Hong Kong do not want to become “another Chinese city”.

Beijing has repeatedly condemned the protesters and described their actions as “close to terrorism”. The protests have frequently escalated into violence between police and activists, with injuries on both sides.

Activists are increasingly concerned that China might use military force to intervene. On Thursday, Beijing moved a new batch of troops into Hong Kong, a move Chinese state media described as a routine annual rotation.

A guide to the Hong Kong protests