Hong Kong police have fired tear gas at demonstrators after petrol bombs exploded in the downtown bar district of Wan Chai as clashes during... 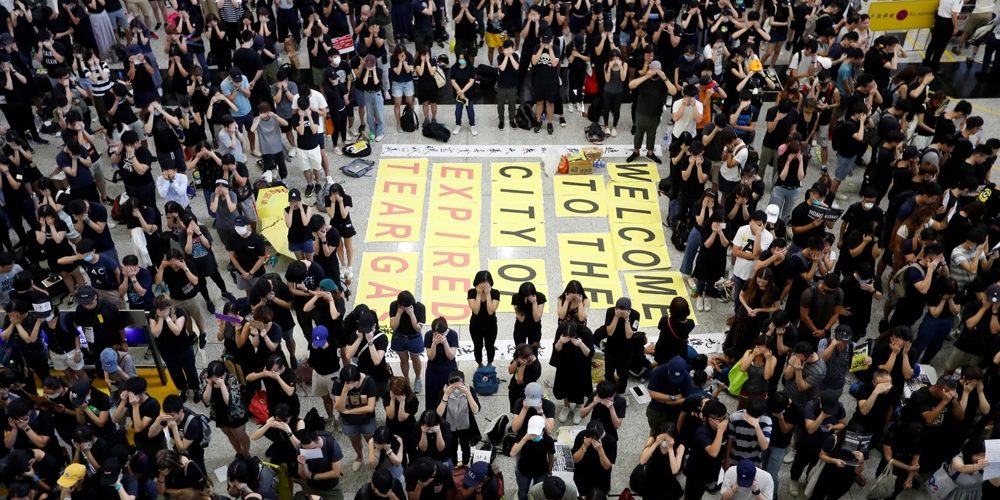 Hong Kong police have fired tear gas at demonstrators after petrol bombs exploded in the downtown bar district of Wan Chai as clashes during a tenth weekend of protests in the city intensified.

Demonstrators are demanding the resignation of the city’s leader Carrie Lam, democratic elections, the release of those arrested in earlier protests, and an investigation into police use of force against the protesters.

Banners at the rally in Victoria Park read “Give Hong Kong back to us” and “Withdraw the evil law,” the latter a reference to an extradition bill that was the original spark for the protests.

The demonstrations have since morphed into a broader bid to reverse a slide in democratic freedoms in the city.

Protesters took over streets in two parts of the Asian financial hub, blocking traffic and setting up another night of likely showdowns with riot police as they chanted: “Liberate Hong Kong, revolution of our time.”

They hurled bricks at officers and ignored warnings to leave the Sham Shui Po area before tear gas was deployed, police said, calling the march an “unauthorised assembly.”

Protesters used metal fencing and plastic ties to construct makeshift barricades and block the road near the local police station, shining blue lasers at the building as officers held up a flag warning the crowd to disperse.

Nearby, protesters wearing gas masks gathered outside a police station in Cheung Sha Wan, as officers wearing protective gear looked down at them from a tall wall around the station.

Across Victoria Harbour, a large group of mostly young protesters marched down the middle of Hennessey Road, a main shopping drag in the Causeway Bay area, as a rally was held in nearby Victoria Park.

Many wore face masks to shield their identities, and a few had helmets. Others just carried backpacks over the black T-shirts that have become their uniform.

“We hope the world knows that Hong Kong is not the Hong Kong it used to be,” said one protester, Louisa Ho. “China is doing more and more to pressure Hong Kong, its people and its organisations.”

Following a rally at the centrally located Victoria Park, protesters fanned out across the city, often playing a cat-and-mouse game with police.

At the same time, a more subdued sit-in protest at the Hong Kong airport stretched into its third day.

“They have this philosophy here … It’s actually based on Bruce Lee, the legend … of kung fu, who had this philosophy of ‘be water’,” Al Jazeera’s Rob McBride said while reporting from Hong Kong

“It basically means that water at times can be strong. It can be a torrent, at other times it can be soft. It’s difficult to grasp hold of, it changes, it morphs. That’s what they’re sort of basing their tactics on.” 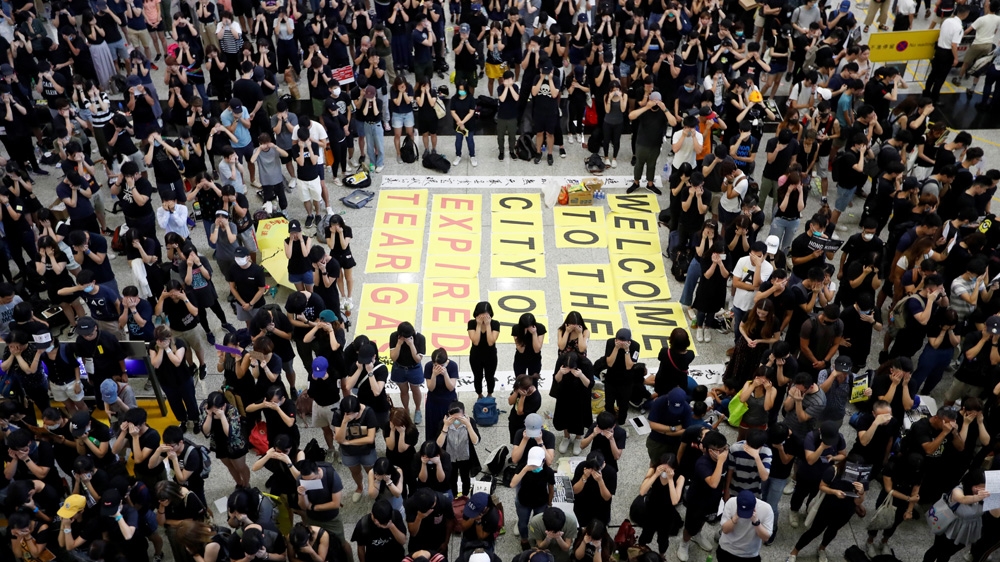 While riot police fired tear gas and arrested 16 people, the two sides avoided the lengthy pitched battles that have been seen in recent weeks.

“Our aim is no injuries, no bleeding and not getting arrested,” said a 17-year-old student protester who gave his family name as Chan.

The protest movement has been seen as the biggest threat to Beijing’s rule of the semi-autonomous Chinese city since its handover from the British in 1997.

The city’s Beijing-appointed leader Lam has ruled out granting the protesters’ demands.

On Saturday, she addressed students at Hong Kong army cadets camp and warned that the city was “suffering from external worries and internal perils”.

“Every person who cherishes Hong Kong and loves peace should work hard together and safeguard our beautiful home.”

But the protesters insist they have no plans to back down.

“There is no chance of retreating, and as a Hong Konger, this is the last hope we see of being able to achieve democracy,” said a 20-year-old protester who gave his last name as Lam.