HONG KONG (BLOOMBERG) – Hong Kong police banned a planned Sunday (Sept 15) march and gathering called by the organiser of some of the... 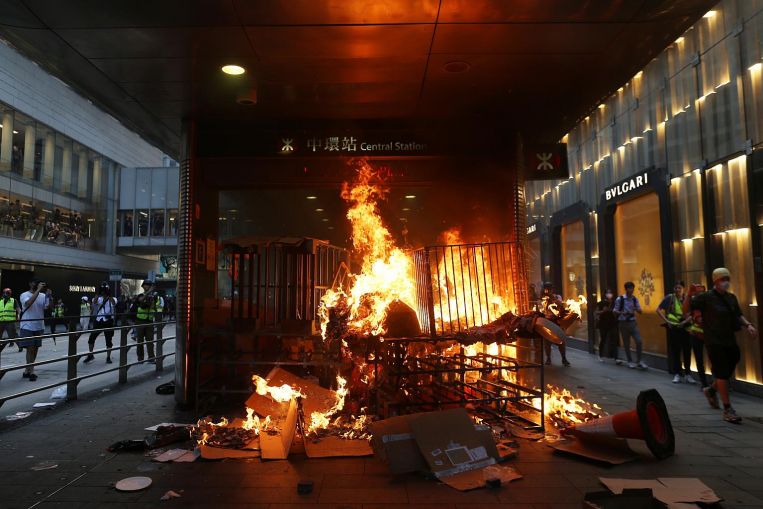 HONG KONG (BLOOMBERG) – Hong Kong police banned a planned Sunday (Sept 15) march and gathering called by the organiser of some of the city’s biggest protests, days after demonstrators set fire to a central subway station as the pro-democracy movement carries on into autumn.

Police Commissioner Stephen Lo on Thursday cited violence around previous protests in the city – with some demonstrators vandalising public installations, blocking roads and setting fires, which caused injuries to protesters, officers and journalists – in making the decision, according to a letter of objection issued to the Civil Human Rights Front.

Police also said Sunday’s location was close to “high-risk buildings” that could be subject to violence, including central government offices, the letter said.

Co-vice-convener Bonnie Leung told journalists that the group was filing an appeal. Police said the result would be made known on Friday afternoon.

The ban is the second issued to CHRF by police since it began organising mass rallies in early June.

Their events have been largely peaceful, though smaller groups of protesters have broken off and engaged in clashes with police in the hours following them, while violence has also marred some of the now near-daily protests organised by demonstrators online.

“In the past three months, most gatherings that were originally peaceful were easily hijacked by violent protesters and turned into large-scale clashes in no time,” acting assistant district commander Kwok Chun-kit said at a regular police briefing.

“The police has long respected the public’s right to peaceful procession and freedom expression, but it also has social responsibility to maintain public security and safety.”

Some verbal and physical scuffles broke out during an afternoon sing-off between groups singing the Chinese national anthem and others who were pro-democracy and singing Glory To Hong Kong, which some demonstrators see as Hong Kong’s anthem, at the centrally located IFC mall, according to footage broadcast on Cable TV.

Hong Kong on Aug 31 saw one of its worst days of violence since the movement began, as thousands of people came out in defiance of a prior ban on a planned CHRF demonstration.

Police cautioned residents in some areas to stay inside as they used “appropriate force” to disperse the crowds.

Small pockets of demonstrators also set fires, vandalised train stations and erected barricades in the city centre this past Sunday – including setting fire to an entrance at Central station, in a glitzy business and shopping area – after a peaceful march by tens of thousands of people to the US consulate in a bid to appeal to President Donald Trump.