Hong Kong leader Carrie Lam was forced to suspended her annual policy address after being heckled in the city’s parliament. Opposition lawmakers disrupted the... 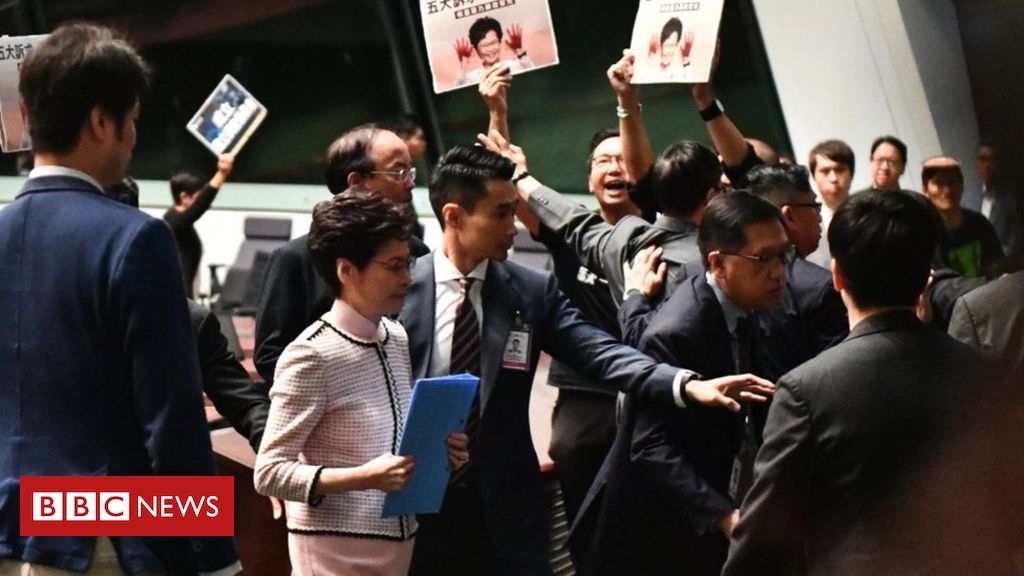 Hong Kong leader Carrie Lam was forced to suspended her annual policy address after being heckled in the city’s parliament.

Opposition lawmakers disrupted the session by shouting and projecting slogans from the start of her speech.

After a first interruption, the session briefly resumed to only be interrupted again. It was then adjourned a second time.

Parliament had resumed on Wednesday for the first time since it was stormed by protesters in July.

The assembly was expected to officially withdraw the extradition bill that sparked the protests.

As the city’s chief executive was about to begin her speech, opposition lawmakers projected the slogan “Five demands – not one less” on the wall behind her.

Since the protests began in June, they have widened from rallies against the extradition bill to five key demands – including universal suffrage.

After the assembly was suspended a second time, the government said the speech would be delivered via video at 12.15pm [04:15 GMT] instead of live from the parliament chamber.

What are the Hong Kong protests about?

Hong Kong is part of China but, as a former British colony, it has some autonomy and people have more rights.

The protests started in June against plans to allow extradition to the mainland – which many feared would undermine the city’s freedoms and judicial independence.

The bill was withdrawn in September but demonstrations continued. Demands have widened to include genuine universal suffrage and an inquiry into police behaviour.

Protests have taken place every weekend over the past month and in every district, causing widespread disruption.