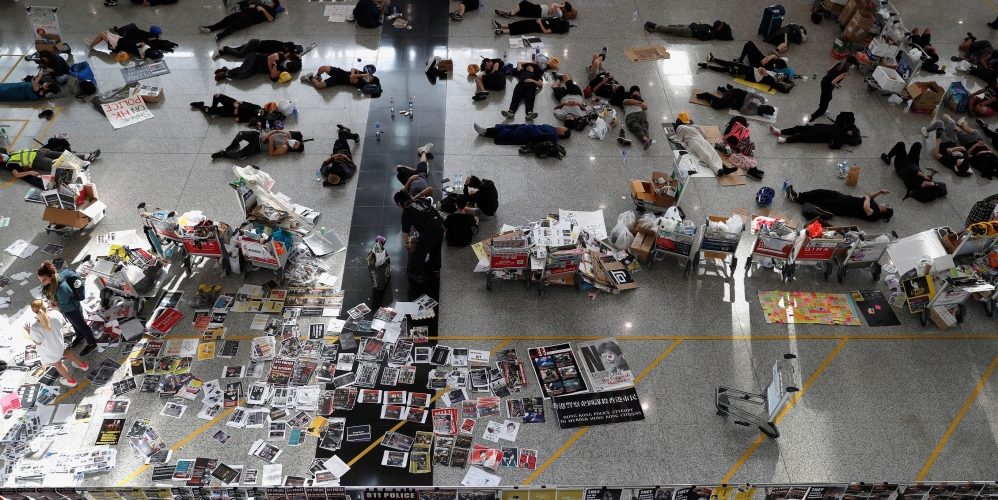 Hong Kong‘s airport has reopened for business, a day after a pro-democracy protest inside the terminal brought the air-transport hub to a standstill, and provoked anger from China, which warned against first signs of “terrorism” and called for the “severe punishment” of perpetrators.

Hundreds of stranded passengers were seen lining up early on Tuesday to catch their delayed flights, as airport authorities announced that it will implement rescheduling while blaming demonstrators for the interruption in one of the world’s busiest airports.

Passengers with luggage were being checked in for flights, and only a handful of the thousands of protesters who flooded into the airport a day earlier remained in the building.

The flight status board at the departures hall showed several flights listed as “boarding soon” with new take-off times listed for others.

Kerry Dickinson, a traveller from South Africa, said she doubts if she will ever fly to Hong Kong again after experiencing the delays.

“I’m trying for the third time to get out of here. So yeah, it’s a bit rough when your luggage is (on) one side and you’re (on) one side. No, it hasn’t been funny,” she told the Associated Press news agency.

Kristina Kralikova, another traveller, blamed the airline for failing to inform passengers that the flights have either been cancelled or delayed.

“My flight was after midnight and everywhere on the website it was like ‘the flight is still on’. So, I came to the airport and it was cancelled and I’m still waiting, like seven hours.”

With a short warning, airport authorities cancelled all outgoing flights on Monday afternoon, as thousands of protesters started to gather in the departure and arrival areas of the airport.

The protests, which have seen both sides adopt increasingly extreme tactics, had until Monday been mostly confined to neighbourhoods across the former British colony.

The airport protest, which caused the cancellation of more than 150 flights, was a rare case of the movement having a direct impact on business travel and tourism – mainstays of Hong Kong’s economy. 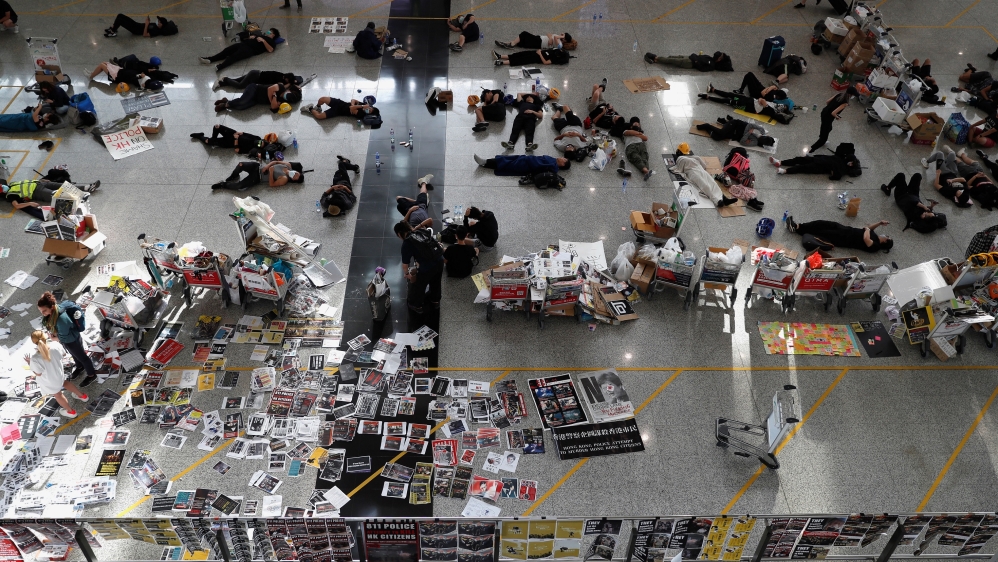 Many protesters said on Monday that they were angered by Sunday’s police crackdown, which left several people injured and at least one female medic blinded in one eye.

Police officers were seen firing tear gas at protesters inside a train station, while beating some with their batons.

There have also been allegations of authorities impersonating protesters and trying to stir up violence to draw the attention of the riot police.

As this developed, China has ratcheted up its rhetoric, accusing demonstrators of “wantonly” trampling on Hong Kong’s rule of law and social order.

Some Hong Kong legal experts say official descriptions of some protesters’ actions as “terrorism” could lead to the use of extensive anti-terror laws and powers against them.

Yang did not suggest that the Chinese government has any imminent plans to step in, but later on Monday, two state media outlets – the nationalistic tabloid Global Times and the People’s Daily – published a video of armoured personnel carriers purportedly driving towards Shenzhen, a city bordering the semi-autonomous territory.

Hong Kong has witnessed ten weeks of mass anti-government protests that were sparked by a now-shelved extradition bill which would allow criminal suspects to be extradited to mainland China.

The demonstrations have since expanded into wider demands for democratic reforms, a call for Chief Executive Carrie Lam to resign and an independent inquiry into police conduct during the demonstrations.