Hong Kong Airport Cancels More Than 100 Flight Due to Protest

HONG KONG — Hong Kong’s airport canceled more than 100 flights on Monday afternoon after thousands of demonstrators flooded the transportation hub, one of... 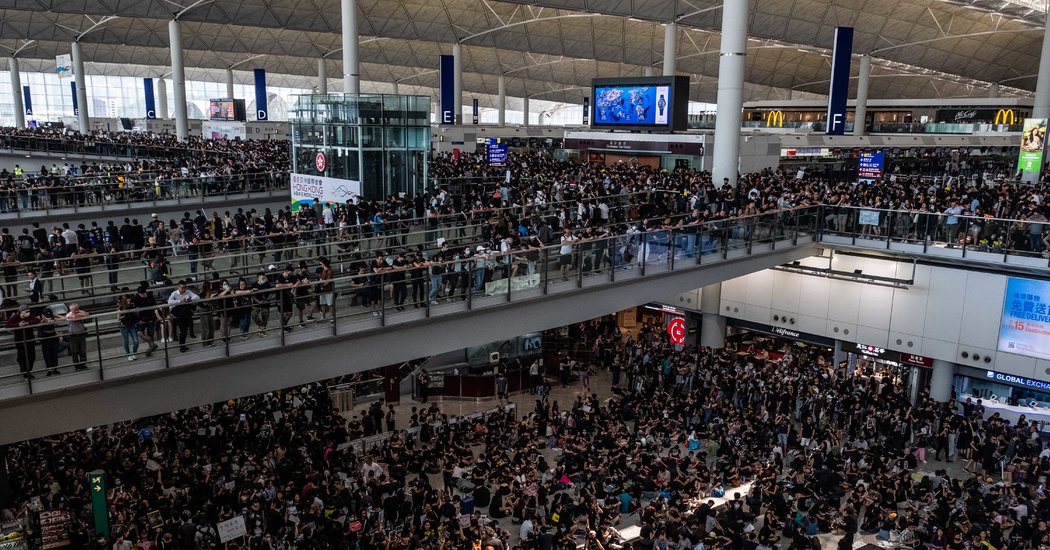 HONG KONG — Hong Kong’s airport canceled more than 100 flights on Monday afternoon after thousands of demonstrators flooded the transportation hub, one of the world’s busiest, in a show of anger over the police’s response to protests the night before.

The cancellation of well over 100 flights, including many departing after 6 p.m., was a stark display of the power of the protests to disrupt the basic functioning of the Asian financial hub. The airport is a crucial connection point for air travel around Asia.

The protesters gathered throughout the day, eventually filling the arrivals hall, before more protesters went upstairs to the departures hall.

Monday’s protest is in part a continuation of what had originally been a three-day sit-in by anti-government demonstrators at the airport. That protest started on Friday and was largely peaceful.

The latest protest came after a night in which the police fired tear gas inside a subway station and charged at protesters on an escalator in another station. Many protesters were angry that a female demonstrator was hit by a projectile in her eye.

The airport said in a statement that it canceled all flights except those that had already checked in or were in the air and on their way to Hong Kong.

The statement said the airport’s operations had been “seriously disrupted as a result of the public assembly at the airport today.”

Noel Tse, a 29-year-old nurse, said she joined the sit-in at the airport because she thought the police had acted with excessive force against demonstrators on Sunday night.

“As a member of Hong Kong, this incident is no longer a political issue,” Ms. Tse said. “It is a battle between right and wrong.”

She criticized the police for firing tear gas into a subway station and chasing protesters down an escalator in a dangerous way. “It was almost like a stampede.”