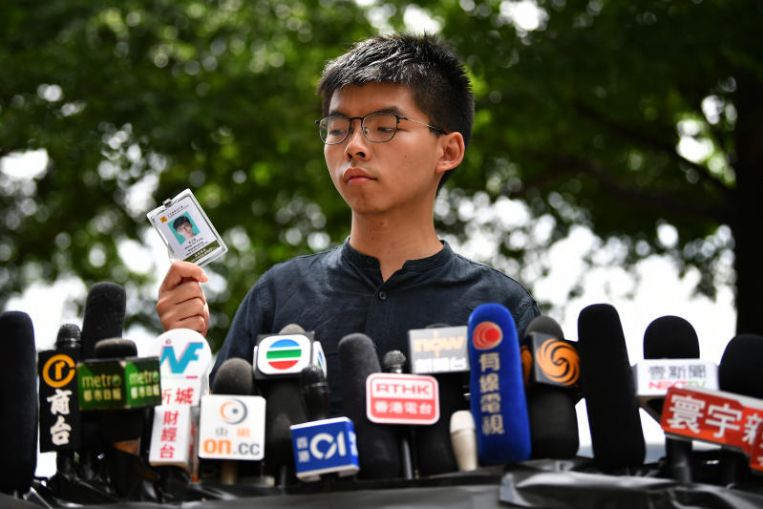 The student leader on Tuesday (July 16) posted on Twitter a message he said he’d received from Google warning that hackers supported by unspecified authorities may have been trying to steal his Gmail password and access his data.

“There’s a chance this is a false alarm, but we believe we detected government-backed attackers trying to steal your password,” the message read. “This happens to less than 0.1 per cent of all Gmail users.”

It’s not unusual for Google to warn Gmail users about possible break-in attempts, which it says it’s been doing since 2012 “out of an abundance of caution”.

The Internet giant pulled its search service from mainland China in 2010, citing censorship as well as concerns about potential state-backed hacks into Chinese activists’ accounts.

Representatives for Google didn’t immediately respond to requests for comment outside of normal US hours.

Mr Wong, a former student leader, co-founded the small pro-democracy Demosisto party and rose to prominence as the face of the 2014 Occupy movement that brought parts of Hong Kong to a standstill.

After serving a month in jail on charges relating to his involvement with Occupy, Mr Wong left prison last month and said he would join the current protests, which have seen hundreds of thousands of people march against proposed legislation that would allow extraditions to China.

He said the “chaos” surrounding the movement, including violent skirmishes between police and protesters, underscored how China – which backs Chief Executive Carrie Lam’s government – was losing hearts and minds in the city.

He has since joined calls for Ms Lam to resign and helped rally demonstrators, including at tense June 21 protests outside the city’s police headquarters, where he demanded that police commissioner Stephen Lo come outside and negotiate.

He also joined July 7 marchers as they walked through Tsim Sha Tsui, an area popular with Chinese tourists, in an effort to reach mainland visitors who live behind China’s Great Firewall and are largely blocked from reading news of the protests.