ANKARA, Turkey — Syrian doctors and humanitarian workers voiced growing alarm at the plight of civilians in northwestern Syria this week, as fighting intensified... 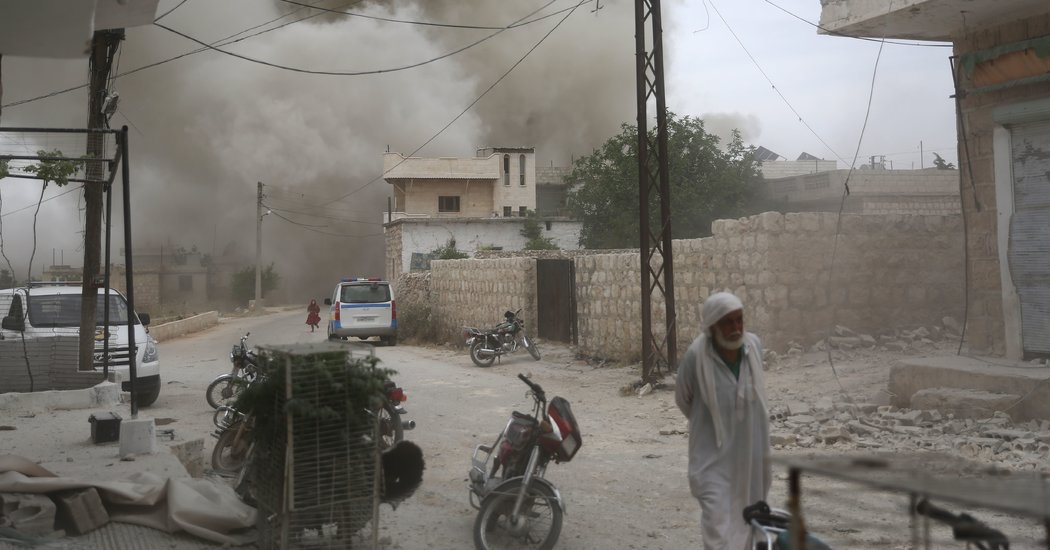 ANKARA, Turkey — Syrian doctors and humanitarian workers voiced growing alarm at the plight of civilians in northwestern Syria this week, as fighting intensified in the nation’s last rebel-held province and hundreds of thousands of people fled north toward the Turkish border.

Turkey has closed that border, after eight years of civil war in Syria spurred more than three million people to seek safety in its boundaries. Now, refugees are camping in open fields and in desperate conditions, moving repeatedly as Syrian and Russian forces have escalated artillery and aerial bombardments in a concerted attempt to advance into the province, Idlib.

Over a quarter-million people have been displaced in the past month and 160 people have been confirmed killed, the United Nations said on Thursday, warning of an impending disaster if the violence is not stopped. Officials say the actual number of dead is much higher than 160.

Video footage of the bombardments, and of dead and injured children being pulled from the wreckage of homes, has flooded social media. In one, a small girl screams as she tugs at the arm of her brother, trapped under rubble. In another, a teenager pulled from a crushed building is told that his brother, lifeless beside him, is sleeping.

“I saw some villages completely emptied or half-emptied of their residents,” said Dr. Zaher Sahloul, the president of MedGlobal, an organization that sends medical teams to disaster regions, who risked the bombardments and threats from extremist groups to visit some of the most devastated areas this week.

He described seeing at least five attacks that caused multiple deaths, including one in the town of Ariha, which he said “was hit a few minutes after we drove away.” At the end of the day, on his way back to Turkey, he and his driver heard the distinctive sound of cluster bombs exploding, he said.

Dr. Zaher said the scale of the bombing was equal to what he had seen in Aleppo, one of Syria’s largest cities, which was largely destroyed in the years of fighting through 2016. “It’s huge,” he said. “I saw buildings completely knocked down.”

Refugees were living in the open, moving from place to place, and often without facilities like toilets or kitchens. In Ma’ret Misrine, he came across 32 families who had already moved four times. “They carry their tents from one camp to another,” he said. “The landowners are afraid if they build toilets their presence will be permanent.”

The refugees are being corralled into a smaller and smaller area toward the Turkish border, many without shelter and the means of survival, he said.

“If the battles continue, we’re expecting 600,000 displaced people, it will be a catastrophe,” he said. “Crossing into Turkey is almost impossible, the borders are completely sealed.”

Millions are threatened by the battle for the province, according to United Nations officials. “An estimated three million people in Idlib are caught up in the crossfire, with some living under trees or plastic sheeting on bare patches of land,” Ursula Mueller, the United Nations assistant secretary general for humanitarian affairs, told the Security Council on Tuesday.

“There are no safe schools or clinics, no way to earn a living. Eight years of airstrikes and shelling, of deadly terrorist attacks and the constant fear of sending your child to a school that may be bombed later that day,” she added.

The Syrian government is intent on seizing two main intersections in order to open the highway between Damascus, the capital, and Aleppo. Its forces have already gained control of 20 towns and villages toward that aim, according to political and military analysts — and laid waste to an area of some 30 square miles in the process.

Even if the fighting ceases, many people no longer have homes to return to, Dr. Zaher said.

Activists in Idlib said they were preparing to march to the Turkish border to protest for an opening, to ease the situation for the displaced people.

A grouping of Syrian humanitarian organizations based in Turkey also warned of the disastrous consequences of the intensified assault, and the lack of humanitarian support for the Syrian civilians in its path.

“In northwest Syria vulnerable civilians are living a nightmare,” the group said in a statement. The group included the Syrian Civil Defense, or White Helmets; the S.N.A., a group of 21 NGOs; and the Idlib Health Directorate, which coordinates health services.

President Recep Tayyip Erdogan of Turkey and President Vladimir V. Putin of Russia agreed in September on a plan to de-escalate the violence and separate the warring parties, but while both leaders have continued to voice support for the accord, they have also continued to support opposing sides in the war.

Russia insists that the Syrian government must eventually take control of Idlib and remove extremist Islamist militants in the region. Turkey has called for a cessation of hostilities for Idlib to remain under rebel control, to prevent further waves of refugees into Turkey and to give the rebels more leverage in a peace settlement.

The two leaders spoke by telephone this month, and while Mr. Erdogan remonstrated with Mr. Putin about the bombing of hospitals and schools — more than 20 health care facilities have been bombed in Idlib in 30 days — both men reiterated their loyalty to the agreement, according to a Turkish readout of the call.

A Turkish official insisted the agreement was by no means dead. Russian officials, including Mr. Putin, have stressed that they are committed to the agreement, he said, speaking on condition of anonymity because of his office’s rules.

[For more stories about the experiences and costs of war, sign up for the weekly At War newsletter.]

But analysts following the situation said that the six-month agreement was in tatters.

Kerim Has, an analyst in Turkish-Russian relations based in Moscow, predicted that Russia was going to ensure the Syrian government gains control of Idlib bit by bit over the course of 2019.

“The Russian side is giving a more powerful signal by recent bombardments,” he said, that it would do nothing to prevent President Bashar al-Assad of Syria from seizing Idlib.

Mr. Erdogan, who is juggling multiple pressures at home and abroad, does not want more Syrian refugees arriving in Turkey and has been reluctant to give up on his support for forces opposing Mr. al-Assad, Turkish officials and analysts said.

Turkey has not pulled out of any of its 12 observation posts in Idlib, the Turkish official said. Its defense minister, Hulusi Akar, has meanwhile been prominent in the news, visiting troops in southern Turkey and making public statements.

On the ground, the rebels seem to have received a recent boost. Syrian reporters say rebel forces have begun using more sophisticated weapons in the last two weeks, including antitank missiles, and have so far thwarted an advance on the ground by Syrian troops.

“By the middle of this month, the picture began to get clearer,” said Abdullah Almousa, a researcher in Syrian affairs in Istanbul. “It is clear that Turkey has decided to keep the Idlib card and not to allow Russia to make further progress.”