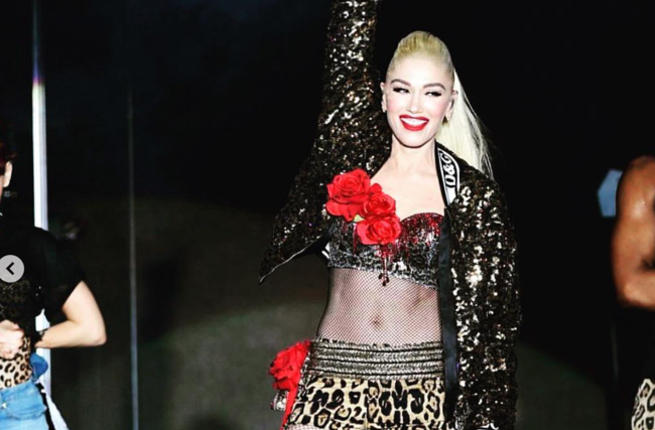 this was Stefani’s first public performance in the emirate (Source: gwenstefani / Instagram)

US pop star Gwen Stefani closed the Dubai World Cup with a spectacular performance, joining the legacy of stars such as Jennifer Lopez and Kylie Minogue, who have headlined the event in the recent years.

The 49-year-old artist performed after the world’s richest horse race on Saturday night at the Meydan Racecourse’s Apron Views.

“Dubai, can’t wait to see you tonight,” Stefani wrote on Instagram before the concert, posting a short video of the Meydan Racecourse. The concert was open to all Dubai World Cup ticket-holders.

Stefani belted out her classic hits, one after the other, including “Don’t Speak,” “Baby Don’t Lie,” “It’s My Life” and others. She took the stage in a sequinned Dolce & Gabbana bomber jacket paired with matching bottoms.

On Sunday, the “Hollaback Girl” singer visited a perfume souk, where she got a custom perfume made.

“This is the man behind making my custom perfume. He made me cry, it was so good,” the American singer said in one of her Insta Stories. In the next video clip, she is seen thanking the perfumer and wishing him goodbye with a hug.

While this was Stefani’s first public performance in the emirate, the “Rich Girl” singer had earlier performed in Dubai at a private show in 2017 at the opening of the Renaissance Downtown Hotel.

Stefani is no stranger to Emirati culture. The former coach on the US “The Voice” played the quintessential tourist during that trip, as she took a desert safari, dined in a desert tent, watched a falcon show, rode a camel, covered her face and hair with a head scarf, shopped at the perfume souk and visited Dubai’s Burj Khalifa, the tallest building in the world.

The singer was in the UAE on a break from her Vegas residency, “Gwen Stefani: Just a Girl,” at Planet Hollywood. She will head back to Vegas to continue her residency until Nov. 2.

Stefani, a three-time Grammy Award winner, has sold more than 30 million albums. From 1986 to 2004, she was in the band No Doubt, whose third album, “Tragic Kingdom,” sold more than 16 million copies worldwide. As a solo artist, she has released four albums.

Dubai has hosted the lucrative racing day every year since it was launched by Sheikh Mohammed bin Rashid Al-Maktoum, vice president and prime minister of the UAE and ruler of Dubai, in 1996.

The first race was held at the now-defunct Nad Al-Sheba Racecourse in 1996. The race has been held at Meydan since 2006.