Reuters /Tripoli/Benghazi An armed group attacked Libya’s largest oilfield but was repelled after clashes with its protection force yesterday, while fighting escalated in eastern... 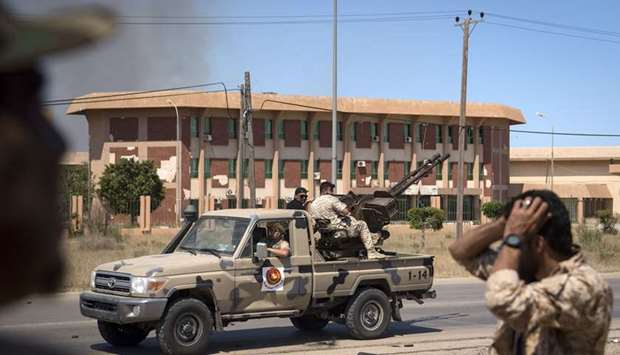 An armed group attacked Libya’s largest oilfield but was repelled after clashes with its protection force yesterday, while fighting escalated in eastern strongman Khalifa Haftar’s effort to capture the capital, Tripoli.

There were no casualties among oil workers and production was unaffected, the National Oil Corp (NOC) said in a statement.
Opec member Libya’s oil output has been repeatedly disrupted by factional conflict and blockades since the 2011 uprising that toppled dictator Muammar Gaddafi.

The assault by the Haftar-led Libyan National Army (LNA), which is allied to a parallel government based in the eastern city of Benghazi, stalled on Tripoli’s stoutly defended southern outskirts last week.

But fighting intensified again yesterday, with heavy shelling, small-arms fire and a warplane all heard in the centre of Tripoli coming from southern districts, residents said.

No more details were immediately available.
The LNA carried out an air raid overnight on at least one target south of Tripoli, residents said, though it was less intense than one on Saturday night. The battle for Tripoli has killed 345 people, 22 of them civilians, a World Health Organisation official said yesterday.
A hospital in Tripoli was evacuated after shelling shattered some windows, he added in a tweet.

The UN refugee agency UNHCR said 146 refugees, mainly Africans and a handful of Syrians, were evacuated yesterday from Libya to Italy, where their asylum claims will be processed. Most of them had been transferred earlier this month from detention centres near the fighting, a spokeswoman said. But 3,300 migrants and refugees remain trapped in detention centres near the Tripoli clashes, the UNHCR said.

“It’s now crucial that other States match this gesture and offer similar evacuation places for refugees caught up in the conflict,” UNHCR chief Filippo Grandi said in a statement.