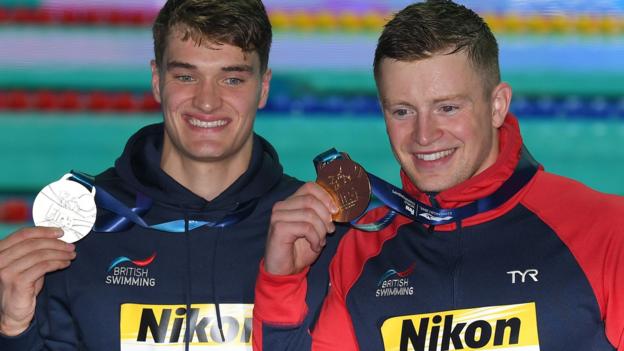 Great Britain’s Adam Peaty has won the 100m breaststroke at the World Championships in South Korea – his third successive gold in the event.

Sunday’s semi-final saw him break his own world record, becoming the first man to swim 100m in under 57 seconds.

Peaty is unbeaten in five years over the distance in major competitions, and will compete in the 50m on Tuesday.

He aimed to beat Sunday’s record-breaking time, but said he was still “over the moon” with 57.14.

“I had to be a better version of myself. Unfortunately I made a tiny little mistake on that first length, trying to force the speed a bit too much,” he said.

“But the most important lesson is I’m still learning. It’s not like I’ve gone 56 and never have to learn again.

“I’m always learning, always trying to improve and that’s the most important thing we can have going into the Olympics next year.”

The Briton has set the 15 best times in the 100m breaststroke, and has become the first male swimmer to achieve a trio of world titles in the event.

He recently revealed he practises “active meditation” to aid his mental health after suffering a dip following his gold-medal winning performance in the 100m breaststroke at Rio 2016 and has since backed mental health campaigns.

Peaty broke his first 100m world record in 2015 at the British Championships, with his time of 57.92, making him the first man to swim the distance in under 58 seconds.

Elsewhere, Britain’s Luke Greenbank knocked two-tenths of a second off his personal best with a 53.75 swim in the 100m backstroke semi-final.

Molly Renshaw also smashed her personal best for the second time on Monday with a time of 1.06.73 effort to qualify for the women’s 100m breaststroke final.

You can’t see where or why he’s going to slow down. From where he won his first world title as a teenager, physically he will have changed so much and he has certainly got bigger.

You can’t get much bigger or much stronger but the experience that he has and how he can swim his races: you look and think ‘if I can just tweak a little bit there’ – he was out a tiny bit quicker and paid for it in the closing stages – you’re just tweaking those little bits and you think those barriers are there to be broken each time by making tiny little margins of difference.