Golan Heights is Not Israeli No Matter What Trump Says!

Druze men at the Israeli-annexed Golan Heights flash the V for victory sign as they look out across the southwestern Syrian province of Quneitra,... 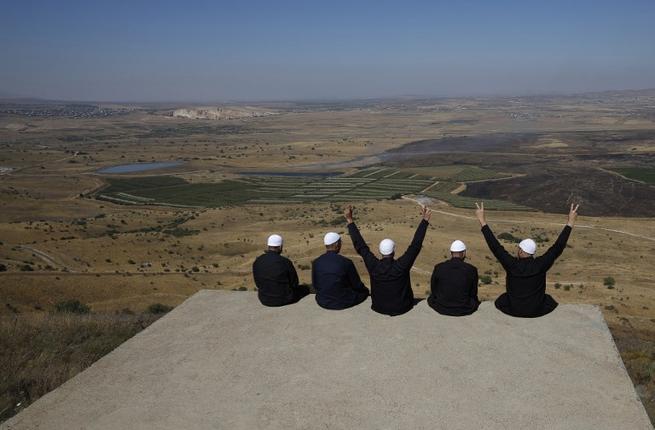 Druze men at the Israeli-annexed Golan Heights flash the V for victory sign as they look out across the southwestern Syrian province of Quneitra, visible across the border (AFP)

As his secretary of state swings through Israel on a Middle East trip, President Donald Trump said Thursday that the United States should “fully recognize” Israeli sovereignty over the disputed Golan Heights.

“After 52 years it is time for the United States to fully recognize Israel’s Sovereignty over the Golan Heights, which is of critical strategic and security importance to the State of Israel and Regional Stability!” Trump said on Twitter.

The stretch of land between Israel and Syria has been disputed since Israel seized it during the Six-Day War in 1967. Last week, the U.S. State Department said it redetermined the territory to be “Israeli-controlled,” instead of its past designation as “Israeli-occupied.” Some nations consider the Golan Heights to be part of Syria, however.

A meeting between Pompeo and Israeli President Reuven Rivlin this week addressed the country’s northern border, as well as the presence of Iranian forces in Syria.

Pompeo also met with Israeli Prime Minister Benjamin Netanyahu, as Netanyahu faces potential bribery charges ahead of his April re-election effort. The issue of Israeli sovereignty over the Golan Heights has been central in the lead-up to the election, the Washington Post reported.

“I will go up with him to the Golan Heights as a continuation of efforts we are making to get the United States, together with other countries, to recognize Israeli sovereignty and the Israeli hold on the Golan,” Netanyahu said at the time.