Giant sunfish washes up on beach in South Australia

Pictures of a giant, odd-looking fish have gone viral after it washed up on a beach in South Australia. Identified as an ocean sunfish... 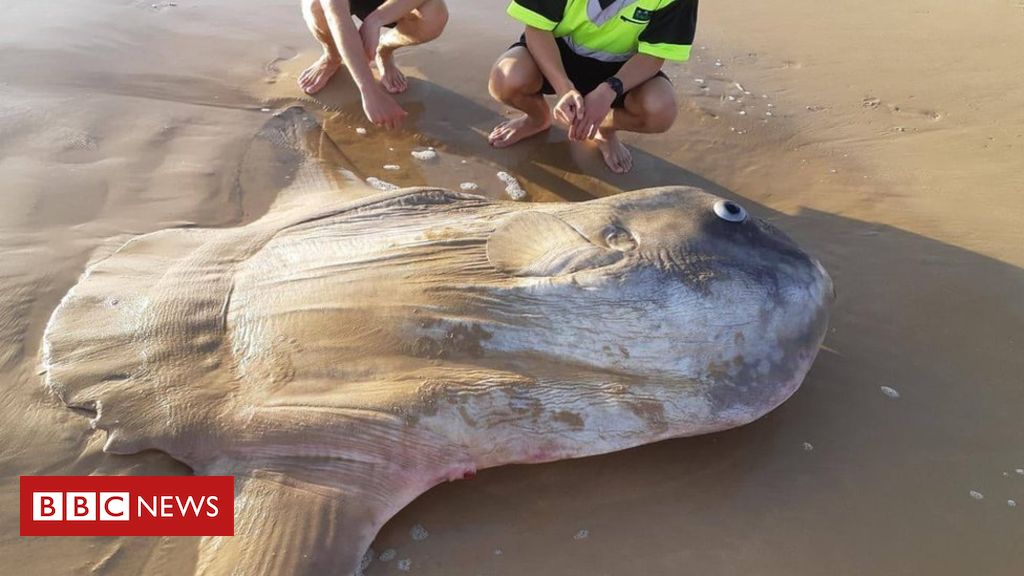 Pictures of a giant, odd-looking fish have gone viral after it washed up on a beach in South Australia.

Identified as an ocean sunfish by experts, the 1.8m (6ft)-long specimen was first spotted by a group of fishermen driving along the sand.

At first, they mistook it for a large piece of driftwood, said Linette Grzelak who posted pictures of her partner’s find on Facebook.

“I didn’t think it was real until I Googled sunfish,” she told the BBC.

Her partner, Steven Jones has worked as a fisherman for years so “he knew what it was but had never seen one in real life”, she said.

“Hence why they took the photos. He said it was extremely heavy and the skin was rough and leathery like a rhinoceros.”

The fish was found at Coorong National Park, 80km (50 miles) south of the city of Adelaide. It’s believed to have later washed back into the ocean, Ms Grzelak said.

Ocean sunfish, or Mola mola, are the world’s heaviest bony fish species and can be found in temperate marine waters globally, according to the Fishes of Australia database.

One expert said the found fish appeared to be a smaller example of its species, which can grow over 4m (13ft) tall and weigh more than 2.5 tonnes (2,500kg).

“It’s probably an average-sized one, they can get nearly twice as big as that,” Ralph Foster from the South Australian Museum told the Australian Broadcasting Corporation.

The species are harmless to people, but are sometimes mistaken for sharks when they swim inshore, says the Australian Museum.

In Australia, they have been known to cause damage to boats due to their size.

Last year, a vessel in the Sydney to Hobart Yacht race had to retire from the race after hitting a sunfish and breaking its rudder.

Earlier this month, a rare hoodwinker sunfish washed up on a beach in California. It baffled scientists who questioned how the southern hemisphere species had travelled so far from its home waters.