Information in German, English and Chinese languages about the Novel Coronavirus 2019-nCoV are on display at the Tegel airport in Berlin on January 26,... 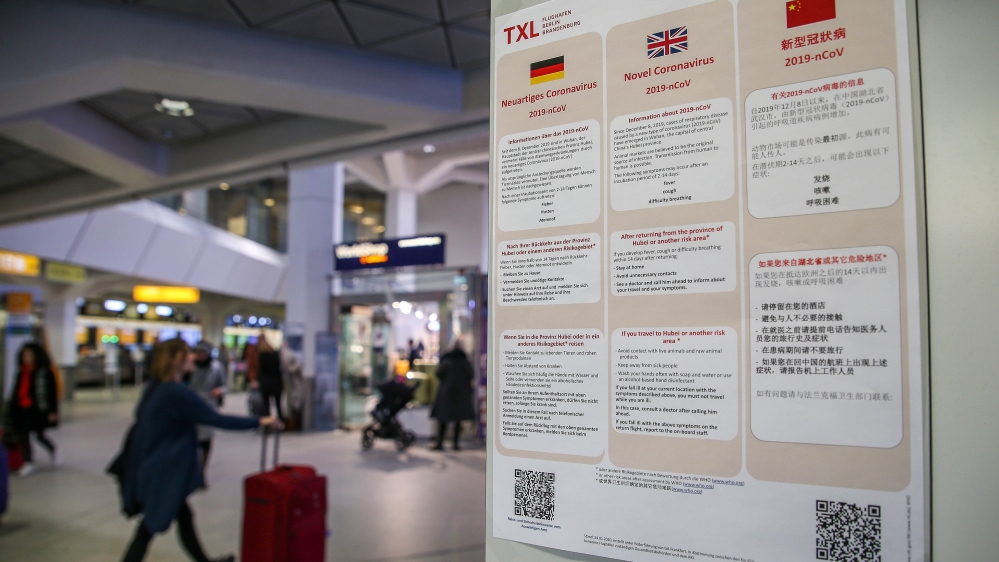 Information in German, English and Chinese languages about the Novel Coronavirus 2019-nCoV are on display at the Tegel airport in Berlin on January 26, 2020 [Andreas Gora/dpa/AFP]

Germany has become the second European country after France to confirm its first case of coronavirus.

The health ministry in the southern state of Bavaria said late on Monday that the man infected with the new virus that emerged in central China is “in a clinically good condition”.

The man from Starnberg, south of Munich, was isolated and is being medically monitored.

People who were in close contact with him were informed about possible symptoms and hygiene measures.

Health Minister Jens Spahn said he was not surprised the virus had reached Germany but the case showed how well prepared the authorities were.

He said the authorities were doing everything possible to stop the spread of the virus.

“The risk to the health of people in Germany from the new respiratory disease from China remains low,” he said, citing the opinion of experts at the Robert Koch Institute.

At least 106 people have died from coronavirus, all in China, which is where the overwhelming majority of cases have been reported.

Nearly all of the dozens of cases outside China are among people who recently travelled from there.

On Friday, France became the first European country to confirm cases – with two people infected. Since then, it has reported one more case.

Germany and France have said they will evacuate their citizens from Wuhan, the Chinese city where the virus is believed to have originated and where most cases are.