DPA/Brussels Germany’s Ursula von der Leyen, the nominee for European Commission president, announced yesterday that she will resign as defence minister in the coming... 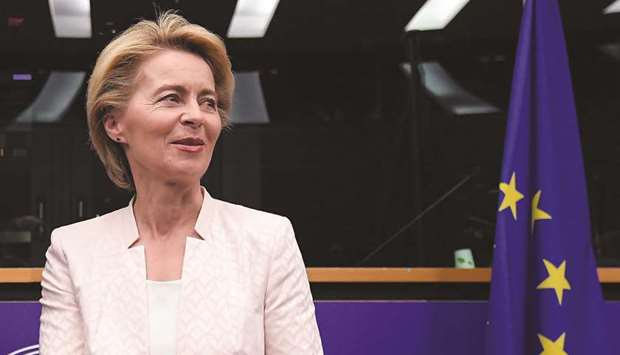 Germany’s Ursula von der Leyen, the nominee for European Commission president, announced yesterday that she will resign as defence minister in the coming days, irrespective of her success at clinching the top EU job.
Von der Leyen, a close ally of Chancellor Angela Merkel, was picked by EU leaders this month to succeed Jean-Claude Juncker, the current head of the European Union’s executive, from November 1.
Her nomination must now be approved by the European Parliament, with the vote due today following a final address to EU lawmakers, who are divided over her bid.
It is far from certain that she will win the necessary majority of 374 votes in the 747-seat legislature.
So far, von der Leyen has only been assured the backing of the 182-member European People’s Party (EPP), to which Merkel’s Christian Democrats belong.
“Tomorrow I will ask for the confidence of the European Parliament. Regardless of the outcome, I will step down as minister of defence on Wednesday in order to serve Europe with all my strength,” von der Leyen wrote on Twitter.
“I am deeply grateful for the years I shared with the Bundeswehr,” she added.
Von der Leyen became defence minister in 2013.
Merkel welcomed her decision to step down, saying that she has “decided in favour of a new phase in her life [and to] commit herself wholeheartedly to becoming commission president”.
Earlier in the day von der Leyen wrote to the Socialist and liberal factions – the second and third-largest behind the EPP – who had demanded more clarity on her policy stances following inconclusive hustings last week.
Among other things, von der Leyen wrote that she wants the EU to be more ambitious on climate change, with a plan to raise the 2030 target for emissions reductions.
The current 2030 goal is to cut greenhouse-gas emissions by 40% compared to 1990 levels.
Von der Leyen said she would push this closer to 55%.