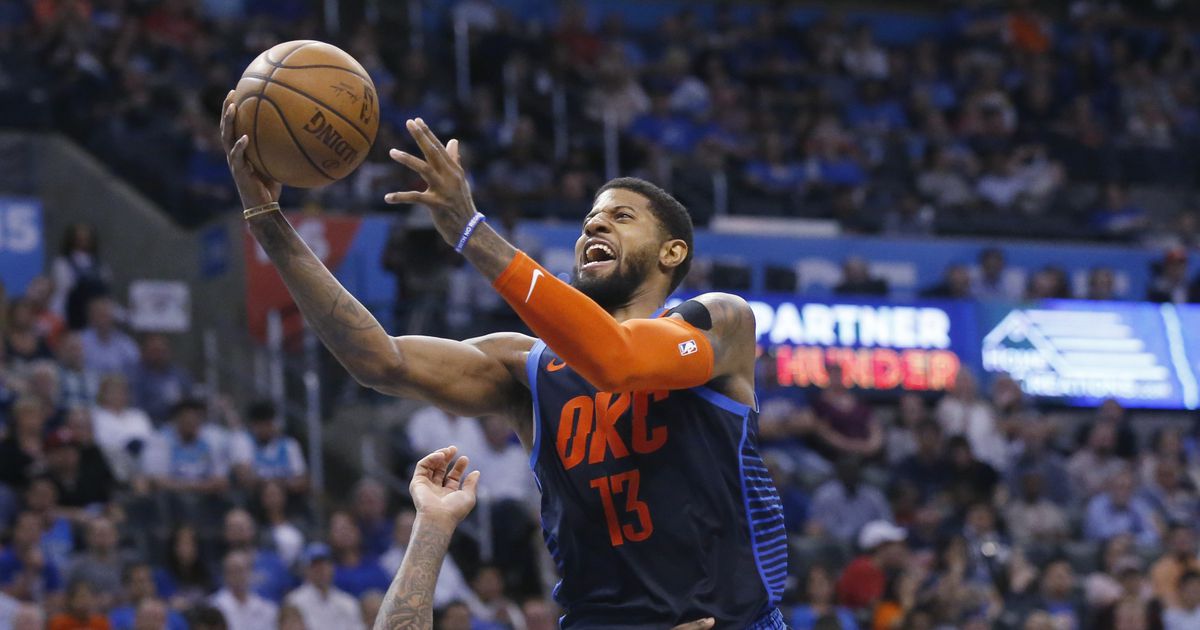 OKLAHOMA CITY (AP) — Paul George hit the game-winning 3-pointer with 1.8 seconds left, and the Oklahoma City Thunder rallied from 14 points down in the fourth quarter to beat the Houston Rockets 112-111 on Tuesday night.

Russell Westbrook had 29 points, 12 rebounds and 10 assists for his 33rd triple-double of the season and George added 27 points for the Thunder, who won their fourth straight.

Oklahoma City moved into sixth place in the Western Conference standings with one game remaining.

James Harden scored 39 points and Chris Paul added 24 for the Rockets, who slipped into the third spot in the conference standings.

Harden scored 26 points in the first half to help the Rockets take a 60-51 lead.

The Rockets led 93-80 at the end of the third quarter. Oklahoma City rallied, and it hit another level after Westbrook returned from a rest in the fourth. His 3-pointer finally put the Thunder ahead 100-99.

Houston regained the lead, but Westbrook hit a 3-pointer with 20.2 seconds left to cut the Rockets’ lead to a point. Harden made two free throws at the other end to make it a three-point game. Westbrook dunked with 9.7 seconds left to trim Houston’s lead to 110-109.

Harden made the first and missed the second free throw at the other end with 9.4 seconds left to set up George’s shot. Houston had one more chance after George’s 3-pointer, but Harden missed a 3-pointer at the buzzer.

Rockets: Harden shot 4 for 11 in the first quarter and still scored 14 points. … The Rockets shot 16 3-pointers and four 2-pointers in the third quarter. … Houston made 18 of 53 3-pointers after setting the NBA record with 27 made 3s Sunday against Phoenix.

Thunder: C Steven Adams had nine rebounds in the first quarter and finished with 13. … Terrance Ferguson scored 16 points for his highest-scoring game since Jan. 17. … Westbrook was called for a Flagrant 1 early in the third quarter for running through Houston’s P.J. Tucker. … It was the 137th triple-double of Westbrook’s career, leaving him one behind Magic Johnson for second all-time.

Rockets: Will host a team to be determined in the first round of the playoffs.

Thunder: At Milwaukee on Wednesday.