Gaza is Teetering Between Truce and Conflict

Over the weekend, two rockets were fired from the Gaza Strip toward Israel after thousands of Palestinians protested along the security fence. The attacks... 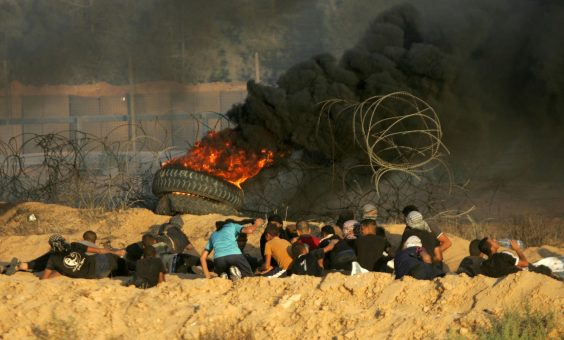 Over the weekend, two rockets were fired from the Gaza Strip toward Israel after thousands of Palestinians protested along the security fence.

The attacks were a clear example of how Gaza is teetering between a fragile truce and a contained tension without any clear idea of where things are moving.

Meanwhile, Hamas announced on Saturday that Qatari and UN delegations would visit the enclave in the coming days “to follow up on the implementation of the truce between the Palestinian factions and Israel.”

An Egyptian delegation also met with Palestinian leaders in Gaza and the West Bank over the weekend to try to try to prevent new flare-ups in the already very fragile truce.

Adnan Abu Amer, head of the political science department at Ummah Open University in Gaza, explained to The Media Line that the situation in the Strip will remain in a state of flux – not war, but definitely not stability, either.

“The situation won’t change until the Israeli elections end and a new Israeli government is formed… at the end of this year,” he said.

Abu Amer said neither Israel nor Hamas was seeking a conflict at this time.

“A war would cost Hamas a lot in terms of money and members while Netanyahu is avoiding any military escalation until the elections end,” he said, referring to Israel’s upcoming snap vote.

However, he stated, if a difficult situation were to take place on the ground between the two sides, the war option would become a possibility.

“The situation will remain between a state of truce and a state of escalation, with different mediators of the UN, Egypt and Qatar, without a long-term solution,” Abu Amer predicted.

According to the Turkish Anatolia News Agency, Abd al-Latif al-Qanou, a Hamas spokesman, said the Qatari and UN delegations would follow up on the establishment of a new power line from Israel meant to supply the Gaza Strip with additional electricity.

A group from the Palestinian Energy Authority met in mid-June with a visiting Qatari technical delegation to study the executive plan to inaugurate the new electric line. In addition, they are to begin work on a project to build a hospital in the northern part of the enclave.

Al-Qanou also noted that a delegation from the Egyptian General Intelligence Service informed Hamas that Israel affirmed it would abide by the terms of the truce.

The latest rocket fire was in apparent retaliation for the IDF’s killing of a Hamas member during border protests last week, an act the Israeli military called a “misunderstanding,” as the targeted individual was reportedly trying to prevent youths from penetrating into Israeli territory.

The renewed tensions – which prompted Israel to deploy additional Iron Dome anti-missile defense batteries to the South – comes despite a loosely defined cease-fire forged earlier this year between Israel and Hamas that prevented a fourth full-blown conflict over the past decade.

Adnan Dumairi, spokesperson for the Palestinian security forces, stressed to The Media Line that as long as Hamas deals with the situation in Gaza in disregard for national unity with the Palestinian Authority, it will keep moving along a “dark road.” Moreover, Dumairi urged not to give what’s happening between Hamas and Israel any sense of validity where agreements are negotiated.

“It’s against the Palestinian legitimacy,” he said.

He added that the situation in Gaza might move toward a military confrontation because of Hamas’s politics confronting the Israeli radical right-wing mentality. “Hamas statements indicate that the Islamic movement is driving the Strip into hell,” he said.

Mohamed Gomaa, an Egyptian political analyst and head of the Palestinian studies program at Al-Ahram Center for Political and Strategic Studies in Cairo, confirmed to The Media Line that the possibility of a Gaza war could not be avoided.

“Although it’s a very weak [possibility], as both sides dont want it to happen,” Gomaa said, “if it happens, a long-term truce would follow.”

However, Gomaa explained that some regional parties like Cairo did not want a long-term truce to be reached in Gaza [between Fatah and Hamas].

“Cairo is trying to contain Hamas with a gradual return of the PA to the Strip,” he said.

Gomaa pointed to the Egyptian, Qatari and UN efforts in controlling the situation in Gaza by trying to implement some of the understandings with the Israel that would ease living conditions in the enclave, including improvement of the electricity supply and the delivery of aid.

“I don’t think Israel is going to implement all of what has been agreed on, but parts of it [will be implemented],” he added.

Meanwhile, Hamas is demanding a total end to the blockade on Gaza. Israel has reportedly offered to ease restrictions on the flow of goods into the enclave – including tens of millions of dollars in Qatari cash – and has green-lighted additional development projects there.