After nine-years, eight seasons and hundreds of brutal deaths it was never going to please everyone, and the Game Of Thrones finale inevitably divided...

After nine-years, eight seasons and hundreds of brutal deaths it was never going to please everyone, and the Game Of Thrones finale inevitably divided fans after it aired on Monday morning.

The sixth and final episode in its much vaunted farewell season concluded with the expected death of Daenerys Targaryen, the surprise anointment of crippled Bran Stark to king of Westeros and the rather symbolic destruction of the Iron Throne.

Elsewhere Sansa Stark was declared Queen in the North, with Winterfell maintaining its traditional independence, making Bran the ‘lord of the Six Kingdoms and the protector of the realm.’ 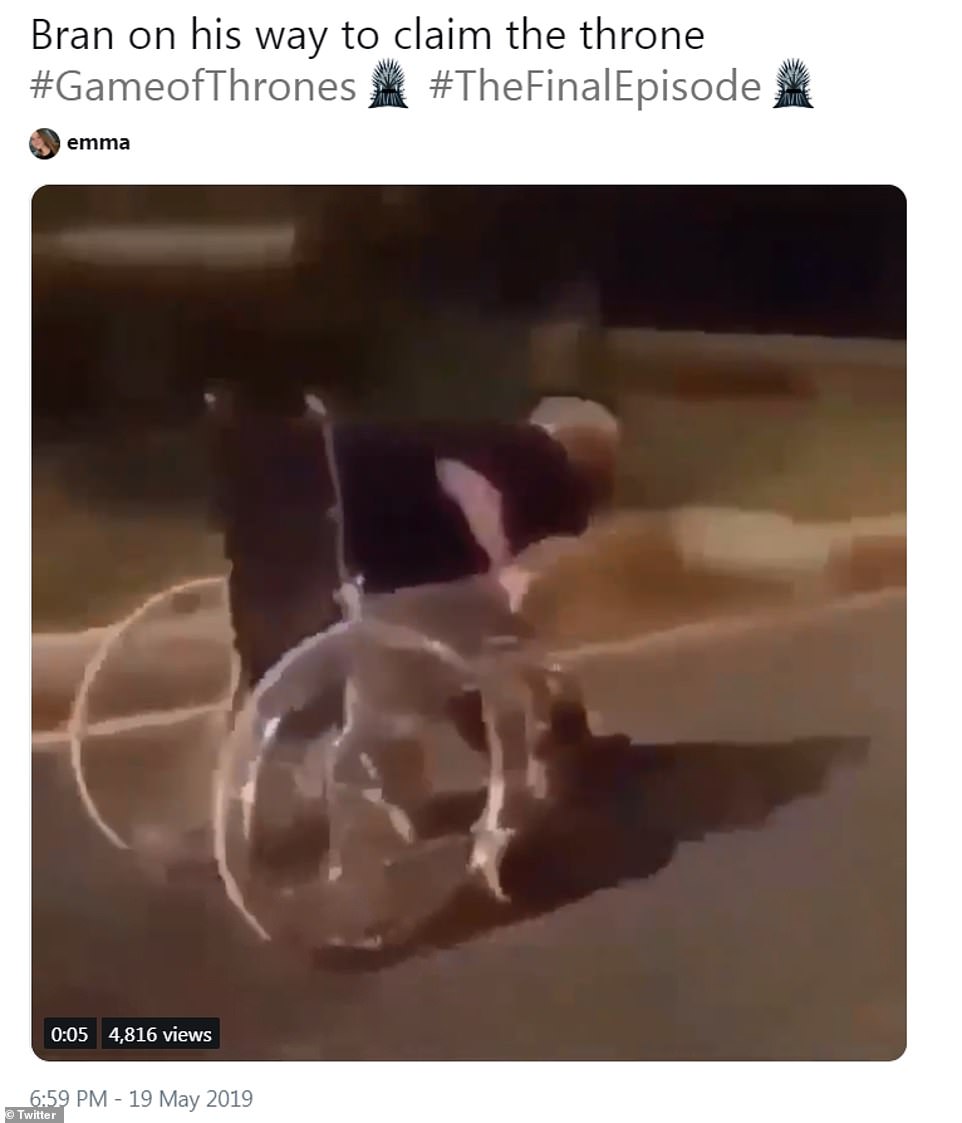 Throne claim: But fans were predictably divided about the outcome, and indeed a season that has been mired by editing gaffes, shaky screenplays and disappointing story arcs

But fans were predictably divided about the outcome, and indeed a season that has been mired by editing gaffes, shaky screenplays and disappointing story arcs.

Evidently unimpressed with Bran’s rapid promotion to ruler of Westeros, one viewer shared a meme of a man struggling in a wheelchair with the accompanying caption: ‘Bran on his way to claim the throne’.

The death of Daenerys at the hands of Jon Snow and Drogon’s reaction touched the hearts of viewers, including Twitter user @emiliacIarked who posted: ‘the most heartbreaking part of this scene is the way drogon nudges daenerys. he has lost both his brothers and now his mother. he deserves so much better. nobody speak to me ever again.’ (sic) 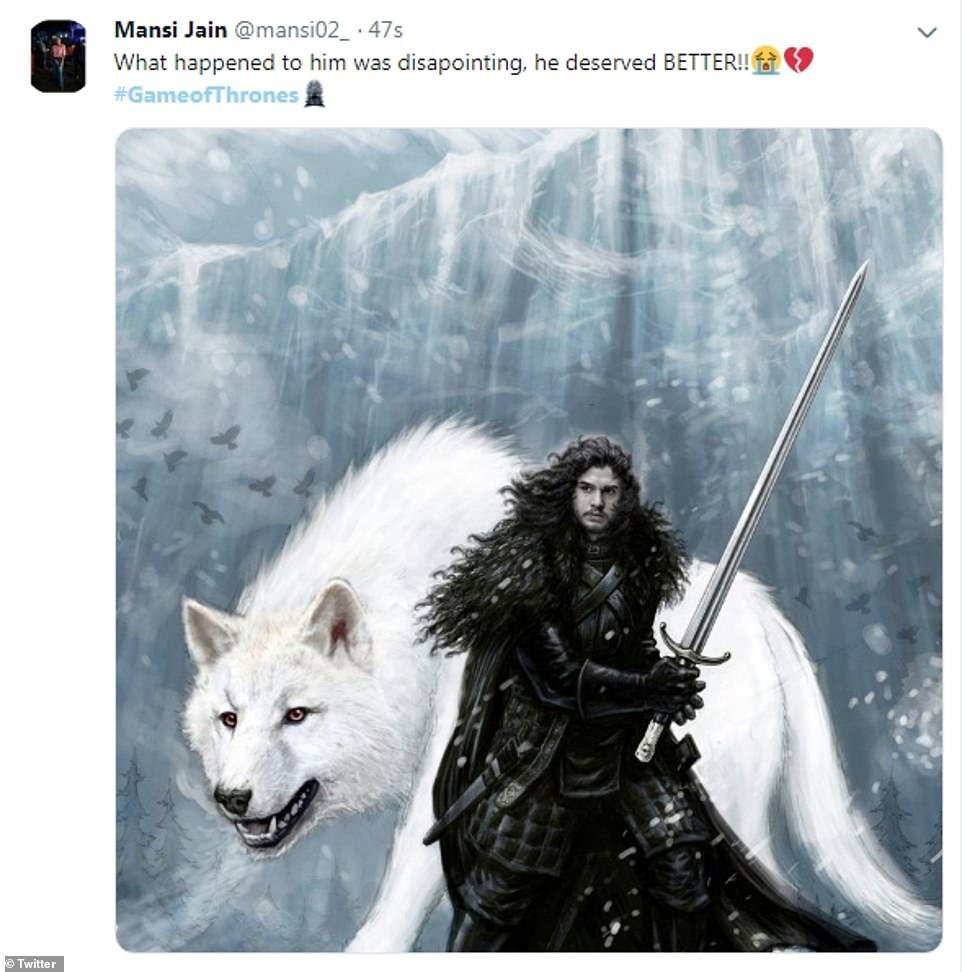 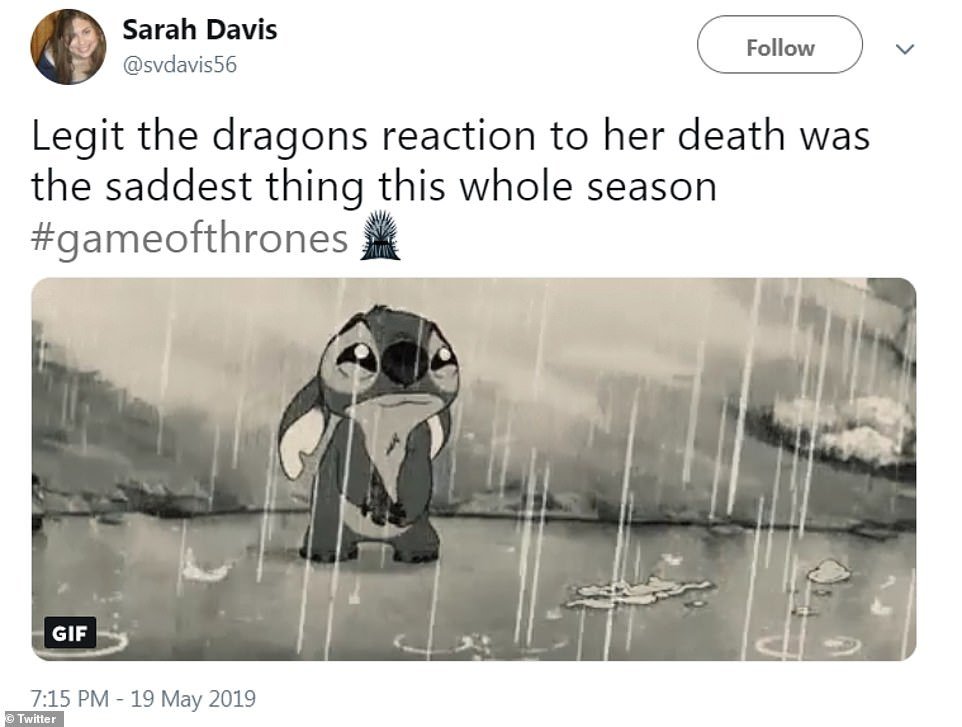 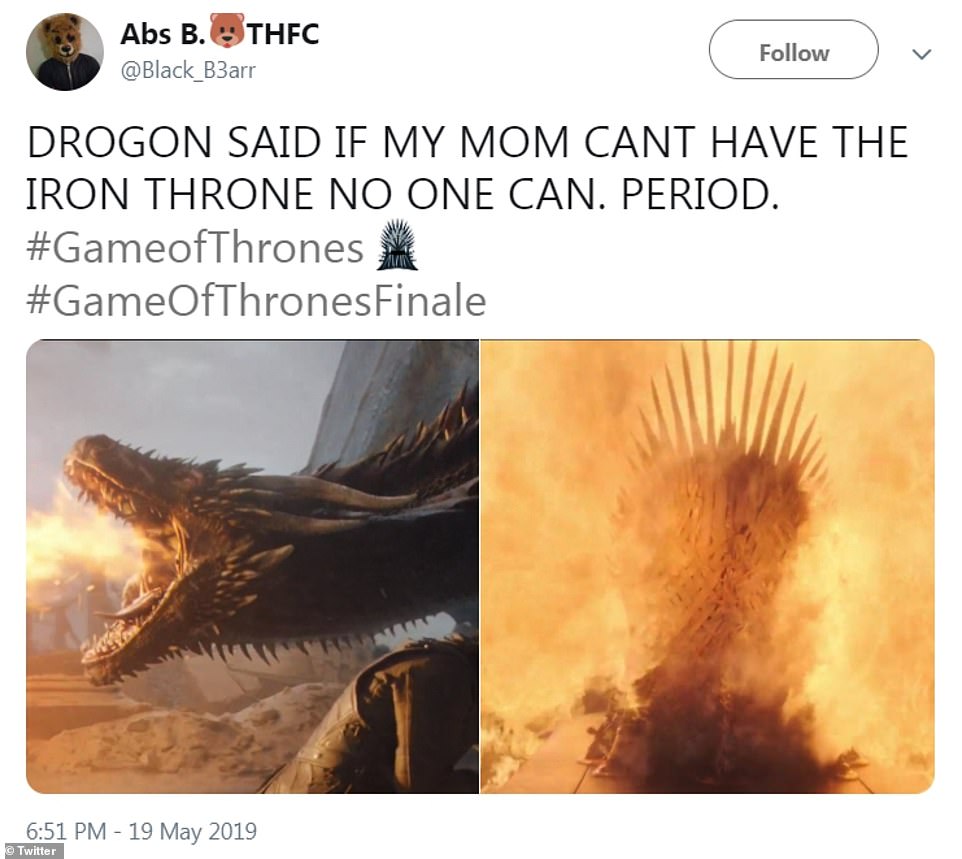 Referencing the heartbroken Dragon’s decision to torch the Iron Throne, another fan wrote: ‘DROGON SAID IF MY MOM CAN’T HAVE IRON THRONE NO ONE CAN. PERIOD.’

One fan summed up the mood for many before the episode aired by posting an image of a forlorn SpongeBob SquarePants sitting alone in a restaurant booth with the caption: ‘Me after Game of Thrones ends,’ read the caption.

Another posted an image of Daenerys on a television screen with a row of seven Khaleesi dolls in front and a banner in the background of the Targaryen house symbol. 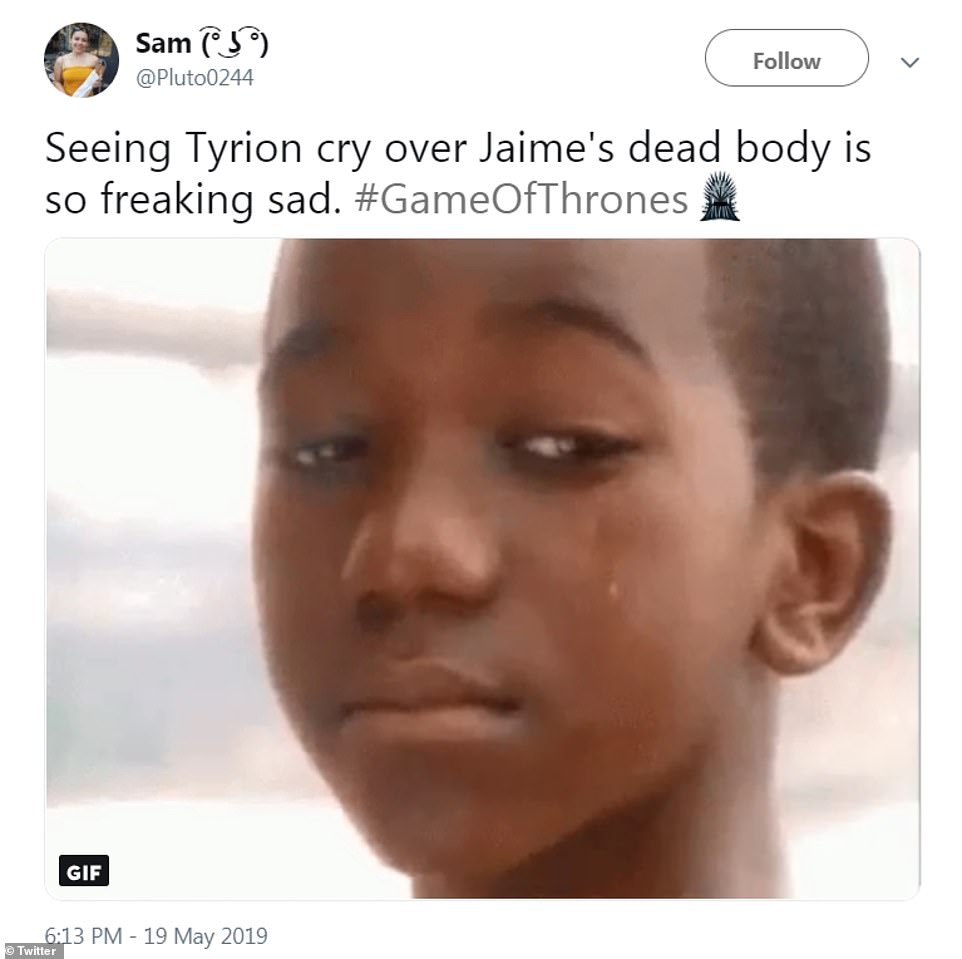 Another disappointed fan shared an image on Twitter of a boy resting his head on his hand while deep in thought, with the caption: ‘Me thinking about all the hours I’ve spent on GOT only to be given this trash finale’.

Elsewhere a tweet shared before the finale aired pointed out the cool reception that Dany likely would be receiving from Sansa after burning down King’s Landing killing women and children.

‘Sansa kicking Daenerys out of Winterfell after she finds out what she did,’ read the accompanying caption.

‘After tonight, my life is going to be drastically different knowing there’s no more game of thrones to look forward to,’ tweeted one devastated viewer.

Others appeared to be making the best of a tough situation, with one fan baking treats before sharing a photo on social media with the caption: ‘Happy cupcakes for sad endings.’

Clearly outraged with Jon’s relegation to the Night’s Watch, one fan ranted: ‘What happened to him was disappointing, he deserved BETTER!!’

While another wrote: ‘Just finished @GameOfThrones Probably the most disappointing final season of any show I’ve ever watched. The most damning thing I can say is that when I started the final episode and began to think of what might happen, I realized I no longer cared and just wanted it to be over.’

But not everyone was disappointed, with one writing: ‘After 8 long seasons and we couldn’t ask for a better ending than this. A mixture of emotions, with highs and lows but at the same time completely unravels and settles and mystery sets your heart at peace.’

Celebs such as Modern Family star Sofia Vergara and actress/filmmaker Elizabeth Banks also shared their thoughts on the finale, though some were dismayed that they couldn’t actually watch it.

Actress/writer Mindy Kaling tweeted a snap of Fozzie Bear looking dismayed, stating, ‘When you’re travelling internationally on the day of the #GameOfThronesFinale.’

Meanwhile Sofia took to her Instagram story to share a number of videos and photos for her Game of Thrones finale party.

She was seen posing with two guests dressed up as Jon Snow and Daenerys Targaryen, while the actress wore a black shirt that featured a famous Thrones catch phrase, ‘You know nothing.’

The actress even had a number of Iron Throne replicas on display at her Thrones-themed party, as evidenced on her Instagram story. 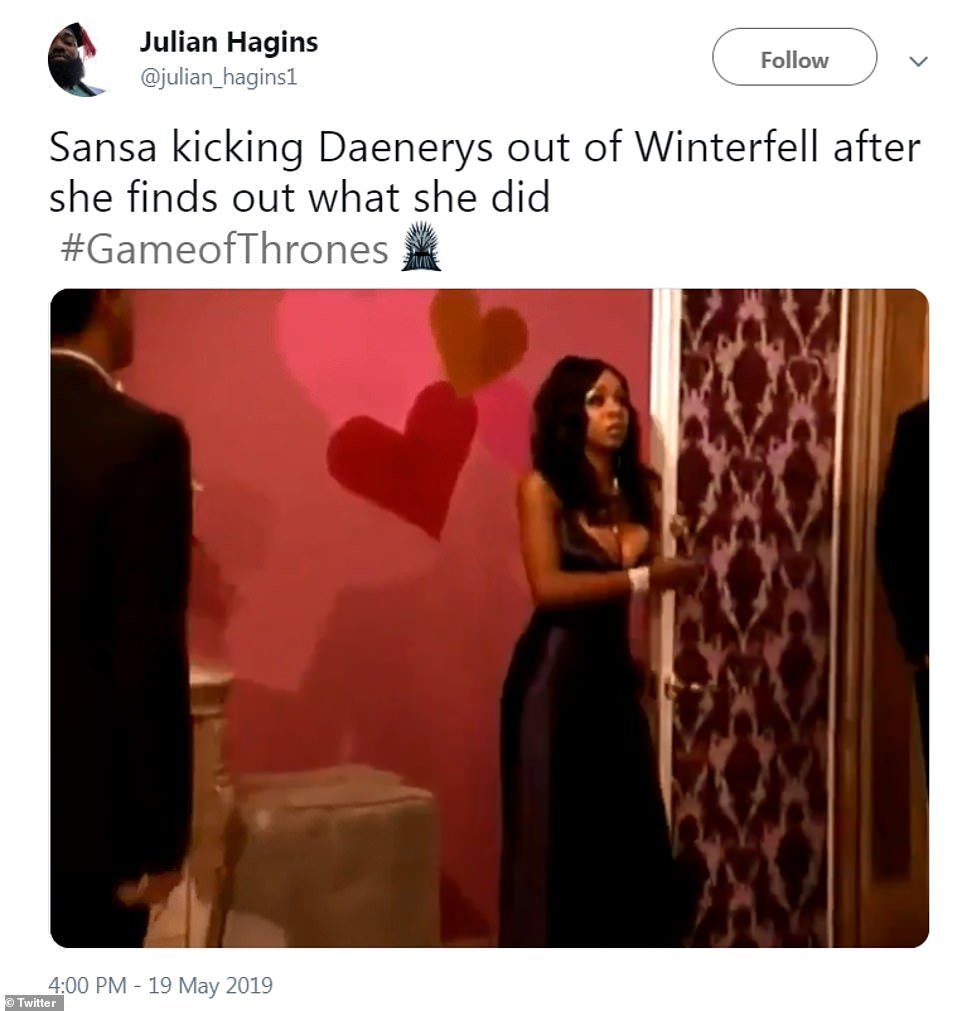 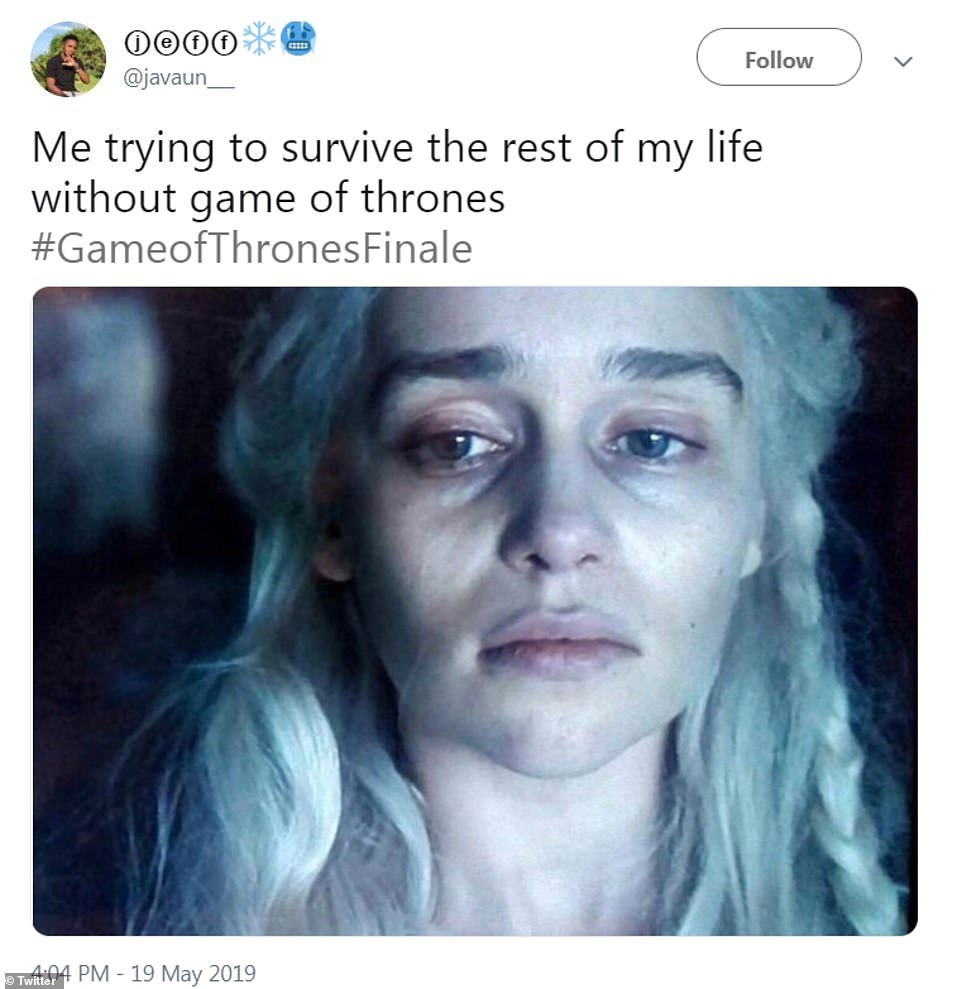 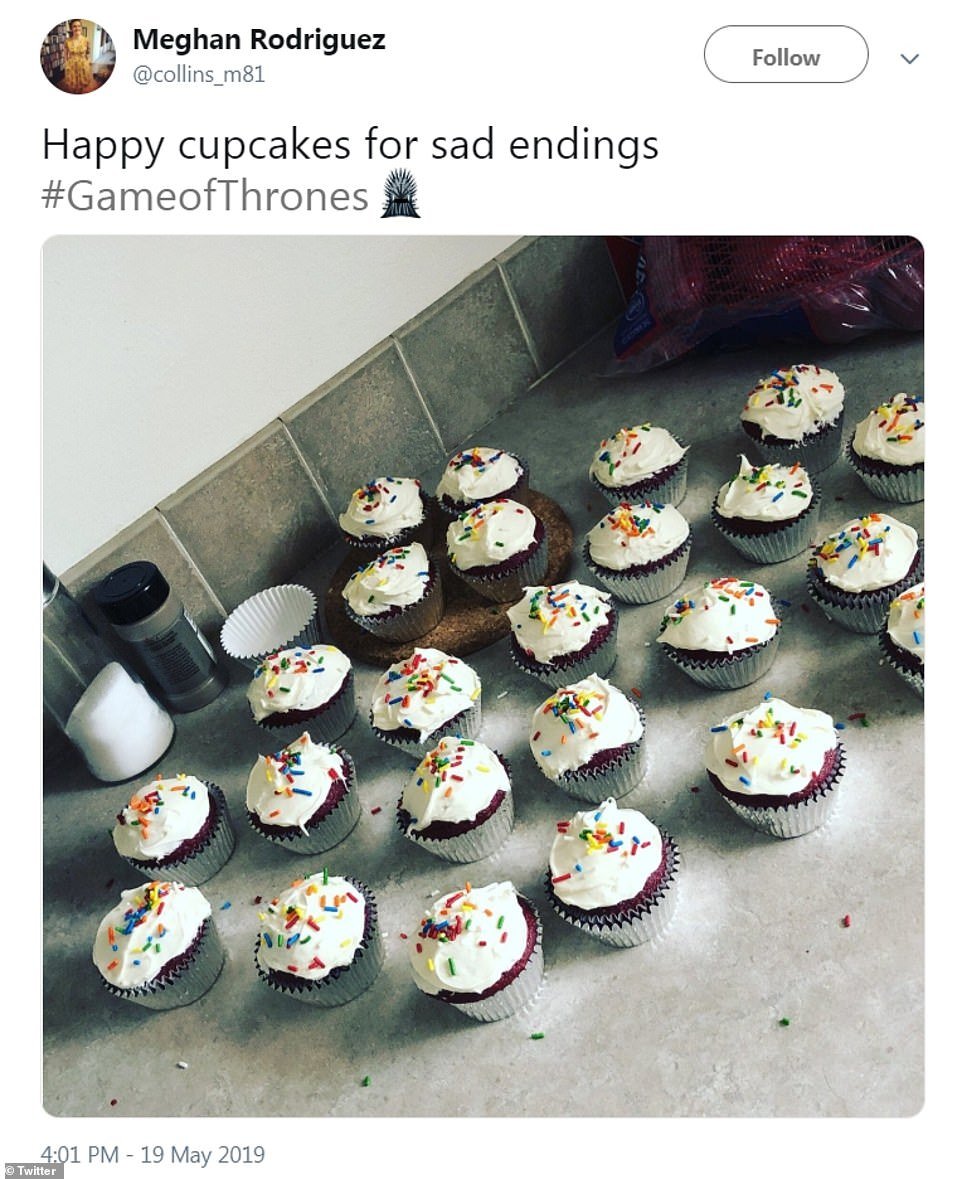 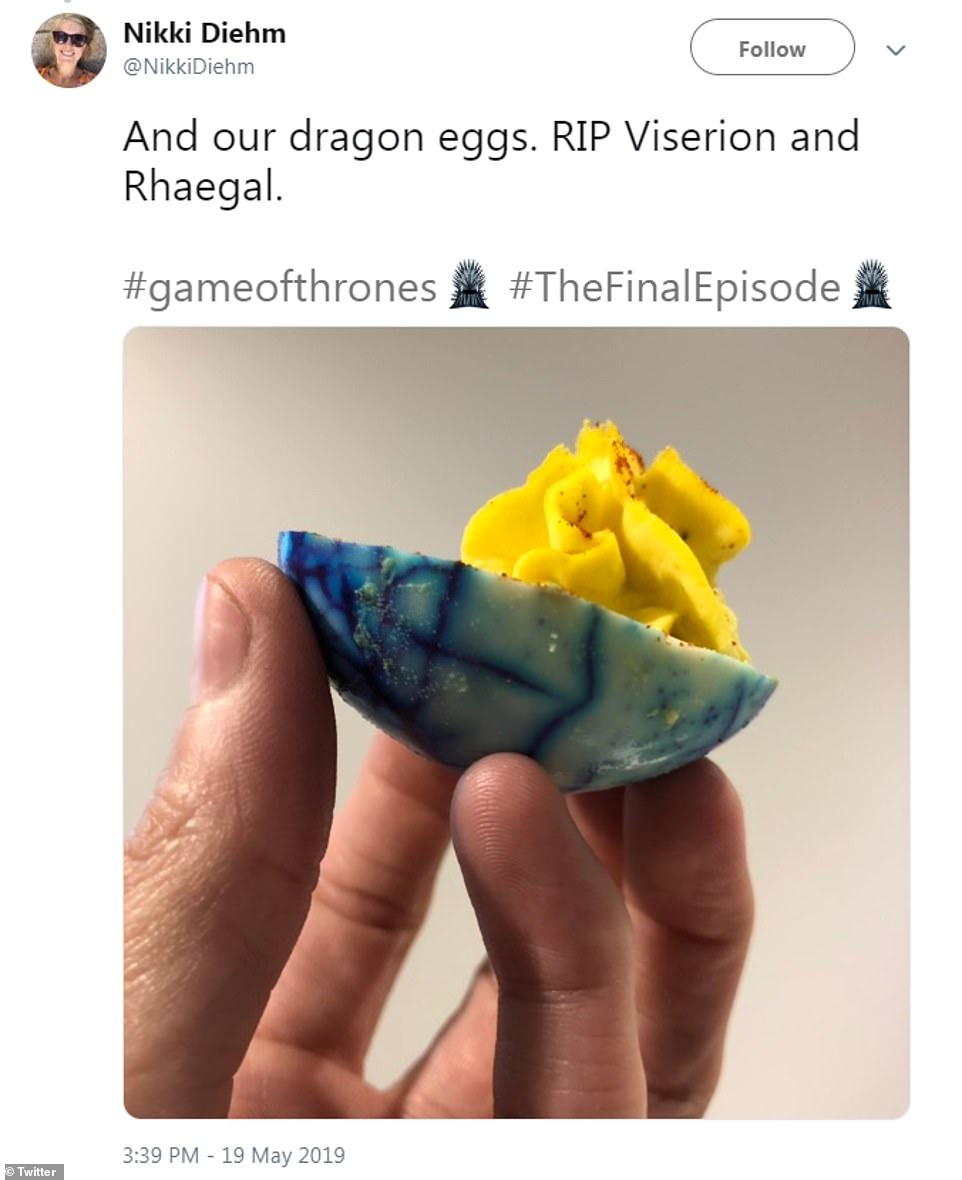 Singer Camila Cabello took to her Instagram story as well, pouring some wine from a Thrones-themed wine dispenser that was shaped like one of Daenerys’ dragons.

‘In the Game of Thrones, you win or you die,’ the singer captioned the Instagram story video.

She didn’t offer her opinions on what happened in the show, but that didn’t stop several other celebs from doing so.

April Love Geary expressed her frustration on her Instagram story, because someone actually spoiled the finale for her.

Comedian Dane Cook expressed his frustration about people like Geary complaining about spoilers, stating, ‘get the f*** off Twitter it’s a minefield of spoilers forever.’

Pretty Little Liars star Brant Daugherty didn’t pull any punches when he took to Twitter, calling the finale, ‘one of the sloppiest episodes of television I’ve ever seen,’ in a multi-tweet thread.

‘No emotional stakes or sense of structure whatsoever. It’s almost remarkable how much I hated it,’ he added.

He criticized the final season as a whole as well, calling it, ‘just the worst way to approach a last season and it’s exactly what I was fearing they would do.’

However fans can take comfort in knowing that counselors are standing by, ready to help them sort out their emotions about the way the show ends.

A Bark.com listing has gone up, advertising the launch and availability of ‘specialized Game of Thrones counselling service to help bereft fans seek support and get the help they need through this tough time.’

The listing clarifies that these ‘qualified counselors’ are ‘familiar’ with the series — naturally — and will be able to help fans ‘digest their feelings and interpretation of the show, which could range from anger and confusion to sadness and grief.’

Those who sign up for the sessions will connect with their counselors via Skype for £20 (roughly $25) for a 30-minute session and £40 ($50) for an hour-long session, according to the listing.

It appears that fans will be able to pick their counselor, although it’s unclear exactly what sort of qualifications these counselors have.

While it may seem a bit overboard for fans of a TV show to require professional help because the series is ending, a Bark.com counselor said that the connection that people have with their favorite TV shows and movies often result in particularly strong attachments to the entertainment properties.