Four people were injured in a daytime shooting in Toronto during a crowded victory rally for the Toronto Raptors basketball team, police say. Thousands... 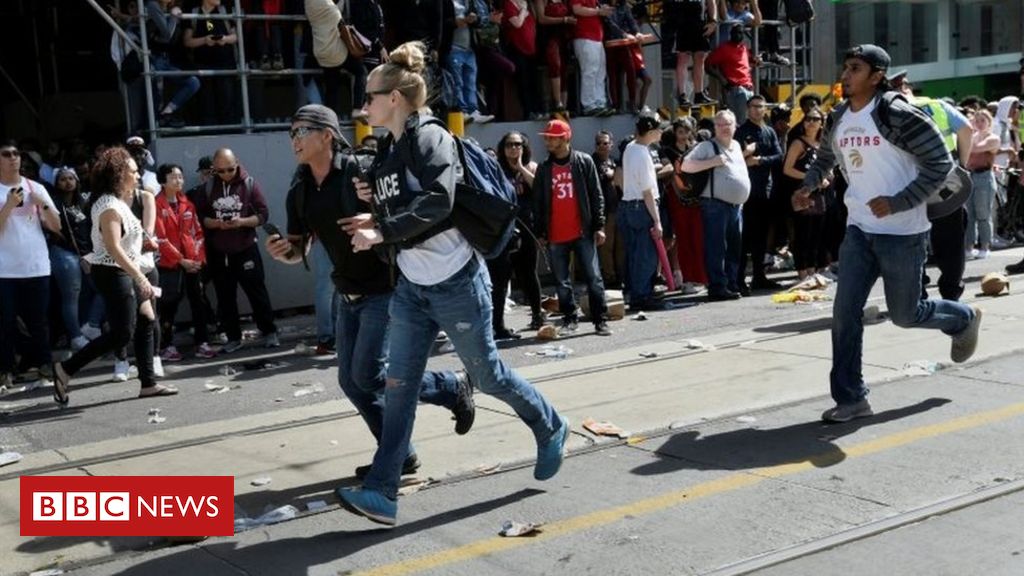 Four people were injured in a daytime shooting in Toronto during a crowded victory rally for the Toronto Raptors basketball team, police say.

Thousands of sports fans were packed into the city centre in Nathan Phillips Square when shots rang out, sending many scurrying for cover.

The event was only briefly interrupted as officials calmed the crowd.

Three people were arrested. Authorities have asked the public to send in footage to help their investigation.

Police tweeted that none of the victims had life-threatening injuries, though two were seriously wounded.

They also said they recovered two firearms from the scene.

Up to two million fans were estimated to have gathered in downtown Toronto on Monday for a parade in tribute to the basketball team.

The Raptors, who are the only National Basketball Association franchise in Canada, won the championship finals against the Golden State Warriors last Thursday – the first Canadian team to win the title.

Around mid-afternoon, thousands of revellers gathered to watch the event’s closing ceremony with players and dignitaries, including Prime Minister Justin Trudeau.

Mr Trudeau later tweeted that he hoped for a “speedy recovery” for those injured.

“We won’t let this act of violence take away from the spirit of today’s parade,” he said.

I hope all those injured in today’s shooting have a speedy recovery, and I’d like to thank the Toronto Police for acting so quickly. We won’t let this act of violence take away from the spirit of today’s parade.

Toronto Mayor John Tory said he was “disappointed” the event was marred by gun violence.

Canadian sports fans were revelling in the win by the Toronto Raptors, the team’s first championship victory in its 24-year history.

The team’s players were carried along the parade route in five double-decker buses where they were supporters greeted them in Raptors shirts and jerseys. The crowd dispersed without further incident in the late afternoon.

Mr Tory had proclaimed this 17 July as “We the North Day” – playing on the team’s slogan “We the North” – to commemorate the historic season.