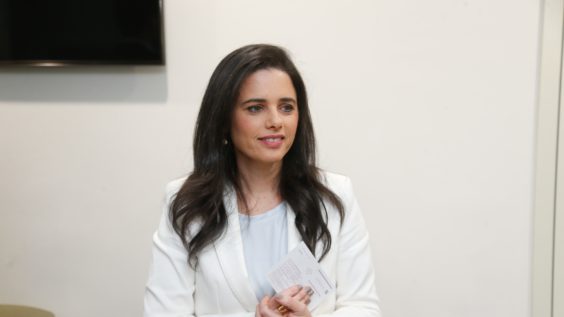 Following a months-long absence and behind-the-scenes political machinations, former Israeli justice minister Ayelet Shaked has returned to the arena, becoming the only woman to head an active Israeli political party.

She leads the New Right after former education minister Naftali Bennett conceded the top spot following the party’s failure to cross the electoral threshold in the April election despite polls projecting otherwise. In that vote, Shaked held the party’s second spot.

At a news conference on Sunday in Ramat Gan, a suburb of Tel Aviv, Shaked called on all right-wing parties outside Prime Minister Binyamin Netanyahu’s Likud to unite under her leadership – and demanded for the New Right half of the seats for the upcoming snap election in September, called when Netanyahu was unable to form a coalition following the April vote.

Dr. Shmuel Sandler, a senior research associate at the Ramat Gan-based Begin-Sadat Center for Strategic Studies (BESA), told The Media Line that internal objections make it unlikely that the 43-year-old secular politician from Tel Aviv will get the coveted position.

“It won’t be easy for ultra-Orthodox parties to allow a woman, especially a non-religious woman, to assume leadership” of a joint list, he said.

However, according to at least one Israeli media report, two leading religious-Zionist rabbis, Rabbi Eli Sadan and Rabbi Shmuel Eliyahu, stated they would support Shaked as the leader of a united right-wing party. The latter’s decision is significant, given he previously stated that only a religious person could lead such a union.

Dr. Ofer Kenig, a research fellow at the Jerusalem-based Israel Democracy Institute, told The Media Line that this shift in opinion could give Shaked an edge.

“This is significant because until now, the card [that Union of Rightwing Parties leader] Rafi Peretz had up his sleeve was support from the spiritual leadership – the rabbis not willing to accept a secular woman. The statements from the two rabbis change that,” he said.

Before Sunday’s news conference, polls by Israel’s Kan broadcaster and Channel 12 television projected that the Likud would receive 30 seats in the upcoming election, as would its main rival, the centrist Blue and White list.

A Shaked-led New Right would receive eight or six, respectively. The Union of Rightwing Parties (URP), led by Peretz, the current education minister and a former helicopter pilot and chief rabbi of the Israel Defense Forces, would receive four seats according to the Kan poll, and five according to Channel 12. The URP consists of Peretz’s Jewish Home party and Transportation Minister Bezalel Smotrich’s National Union party, both seen as being to the right of the Likud and even the New Right.

If Shaked does indeed take the helm of a united ticket, her list would receive 12 seats according to the Kan poll, or 13 according to Channel 12, giving it a slight edge over the two parties running separately. In that scenario, both polls showed the Likud dropping to 28 seats, putting it behind Blue and White, with 29.

Reports later surfaced claiming that Netanyahu had urged Peretz not give the URP’s top slot to Shaked, something she reportedly had been eyeing before returning to the New Right. Moreover, Netanyahu’s wife, Sara, reportedly asked the same of Peretz’s wife, Michal. Sara Netanyahu called the report “fiction.”

“There is a lot of psychology in these elections, not only politics. The best thing for the Likud would have been to bring her in, but they didn’t. Politics is not always rational; personal elements intervene,” he said.

Indeed, other media reports surfaced in June that Sara Netanyahu forbade her husband from giving Shaked a spot on the Likud list, reportedly saying that “Ayelet Shaked will not be in the Likud – period.” Unidentified sources familiar with the situation claim that this apparent veto has been going on for years, with much speculation pointing to the fact that Shaked is attractive and Sara Netanyahu is still hurt by an affair her husband admitted to early in their marriage. The Likud denied the reports.

Given the fact that the polls project a more massive right-wing bloc if Shaked does, in fact, lead a united list, Netanyahu might welcome the opportunity to have sufficient Knesset members recommend him to President Reuven Rivlin to form a government. Indeed, he intervened prior to the April election to have Peretz and Smotrich welcome Otzma Yehudit (Jewish Power), a party led by followers of the late Rabbi Meir Kahane, into a joint list, believing this would increase the right-wing bloc.

But looking back, Sandler emphasized Netanyahu’s election day practice of crying “gevalt” – Yiddish for alarm – as a ploy to get Likud voters to the polls.

“He says something alarming, and then people vote Likud,” he explained. “Any seat advantage [the URP] would have, it’ll switch to Likud when people go vote.

The IDI’s Kenig disagrees with this assessment, claiming Netanyahu will not want to take the risk.

“Polls for the previous election indicated that Bennett and Shaked would succeed, and they didn’t. Bibi can’t trust that they will this time. His main concern is to bring the radical right-wing Otzma Yehudit back into the fold,” he said.

Shaked and Peretz spoke by phone and Monday and agreed to meet in the coming days to jumpstart negotiations toward a joint list.

“The responsibility to [achieve] unity is on our shoulders, it is the call of the hour,” Shaked reportedly said during the call.