Baked beans, tinned fish and canned fruit are carried out of a church in west London by neatly-dressed people in their 30s and 40s.... 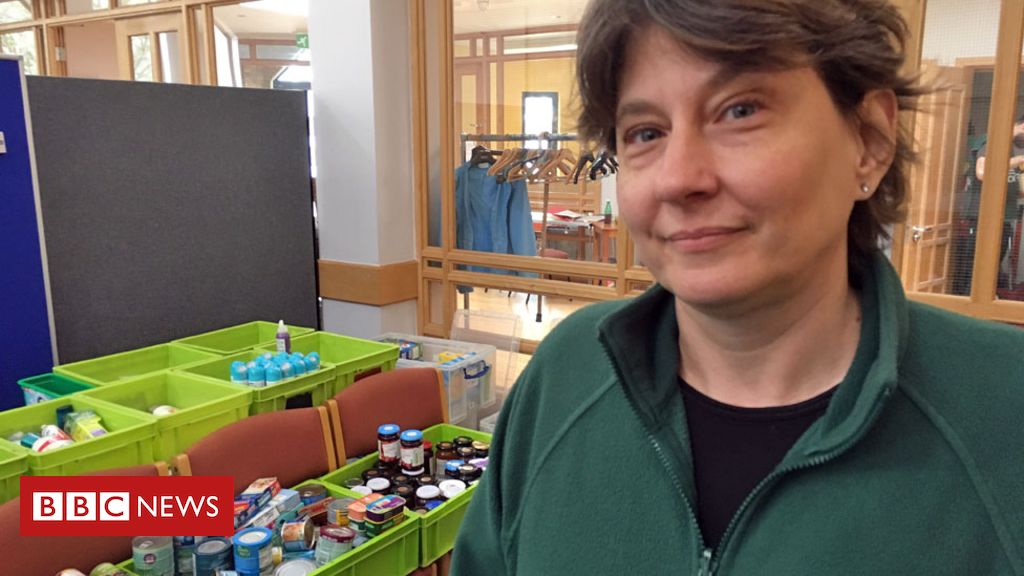 Baked beans, tinned fish and canned fruit are carried out of a church in west London by neatly-dressed people in their 30s and 40s.

They do not fit any stereotype of what poverty should look like, but these are among the rising numbers of people turning to food banks.

The UK’s biggest food bank network, the Trussell Trust, gave 1.6 million packs of food supplies in the past year.

This was more than ever before and a 19% annual increase.

The food bank in St Matthew’s Church in Fulham is one of three sites run by Hammersmith and Fulham Foodbank, a charity which feeds about 300 people a week.

It is in an area of London where million-pound houses are not unusual, only a short walk from the luxury developments of Chelsea Harbour.

The people coming to the food bank are often “embarrassed and ashamed, they don’t want to be here”, says Daphine Aikens, the charity’s chief executive.

But they are coming in growing numbers, with almost a threefold increase in three years.

Each person will have their own complicated reasons – but the common denominator, she says, is simply running out of cash.

“They just do not have enough to live on,” says Mrs Aikens.

This can be low pay, low benefits, delays to universal credit, interruptions in earnings, illness, unexpected costs, debts, rent arrears, rising utility bills… but in the end, it comes back to a lack of money.

“The tipping point between coping and not coping can be pretty abrupt,” says Mrs Aikens.

These are people living on a financial tightrope, with just about enough to get by each week, with no “rainy day” reserves, who can be pushed into serious difficulties by a big bill or a gap in income.

There are so many stories here.

A pensioner who got a ridiculously big bill, but who paid it rather than make a fuss, and then found himself without anything left. A woman whose financial problems began when trying to escape domestic violence.

A couple whose work did not pay enough. A woman who faced a penalty charge from the NHS and was self-harming.

“Poverty is very hidden, but it is very real,” says Mrs Aikens.

The Trussell Trust figures show that people on benefits are the most typical recipients, but a significant proportion of three-day food supplies, about 320,000, go to people in work.

Mrs Aikens says it is important to welcome people and give them “dignity” when they come to the food bank.

The food has been donated, often through supermarkets, and those collecting it have been referred by other services, such as Citizens Advice, GPs, schools and children’s services.

If there is a risk of such handouts being exploited by scroungers, queuing for a bag of pasta and tinned peaches seems like a fairly low-gain fraud.

Those arriving often bring other problems, including depression and anxiety – and food banks are turning into mini-welfare and advice centres.

St Matthew’s is offering access to psychotherapy sessions, along with consumer and legal advice, holiday clubs for families and training sessions on cooking and budgeting.

“What we are seeing year upon year is more and more people struggling to eat because they simply cannot afford food. This is not right,” says the Trussell Trust’s chief executive Emma Revie.

There are now about 2,000 food banks across the UK, with the Trussell Trust accounting for about 1,200 of them. The number of supplies being distributed has risen by 73% over the past five years.

The trust puts particular blame on the benefits system – in particular delays in payments during the transition to universal credit.

This is rejected by the Department for Work and Pensions (DWP), which says there is no delay for claimants.

“It also cannot be claimed that universal credit is driving the overall use of food banks or that benefit changes and delays are driving growth,” said a DWP spokeswoman.

Whatever the reason, the idea of food banks would once have seemed out of place in the UK, but John Griffiths, a volunteer and trustee at St Matthew’s, says without them “people would be on the streets begging”.

Researchers from University of Oxford and King’s College London tried to identify the typical users of food banks, in a major study a couple of years ago.

They found the most frequent recipients were single men, lone mothers with children and single women – between them accounting for about two-thirds of all food bank users.

It was usually people of working age, middle-aged rather than young or old, mostly living in rented accommodation.

Almost nine in 10 were born in the UK.

These food bank users were living in “extreme financial vulnerability” and might have a life of missing meals, often for days at a time, going without heating and electricity.

About five out of six were without a job and depending on benefits – and those in employment were usually in insecure, low-paying work.