Demonstrators gather in front of the National Congress as politicians vote on an ’emergency food’ bill, in Buenos Aires, Argentina Buenos Aires,... 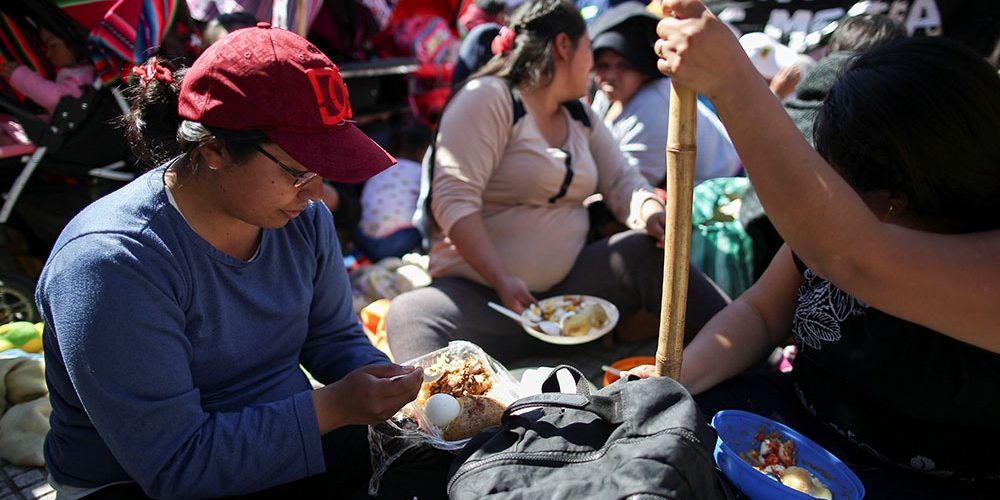 Demonstrators gather in front of the National Congress as politicians vote on an ’emergency food’ bill, in Buenos Aires, Argentina [Agustin Marcarian/Reuters]

The law will increase financial support destined for food and nutrition programmes by at least 50 percent until December 2022.

It was overwhelmingly approved by the Congress last week, with the support of the ruling party of President Mauricio Macri, which had resisted the bill at first.

In her address before the Senate on Wednesday, Maria Cristina Fiore Vinuales, a senator from the northern province of Salta, countered Macri allies who have called “hunger a campaign slogan” with statistics.

Citing figures from a recent UN report, Fiore Vinuales said the number of people who experience “grave” food insecurity in Argentina, eating once a day or not at all, jumped from 2.5 million to five million from 2014 to 2018. When combined with people who live with that insecurity more infrequently, the number balloons to 14 million people – or 32 percent of the population, according to the UN. Researchers have pegged the poverty rate in Argentina at 35 percent, and say that more than half – 51.7 percent – of the country’s children live below the poverty line.

“This isn’t a political slogan,” Fiore Vinuales told her colleagues in the Senate. “We can’t brush it under the rug. We have to confront it, and it will fall upon another person to try to address this issue at its root, and not just with palliative measures.”

Senator Fernando Pino Solanas added that “if something sums up the national politics of these times, it is dehumanisation. Human rights are not a top priority. We speak of the malnourished as figures.”

Social movements and labour groups have long been calling on the government to increase food assistance, a demand that took centre stage again following the presidential primaries in August, in which the right-wing Macri lost by 15 points to a left-wing ticket of Alberto Fernandez and former President Cristina Fernandez Kirchner. The beleaguered Argentine economy took another big hit last month: the peso plummeted in value and prices have shot up, further stressing the bottom line for Argentines that were already having a hard time making ends meet.

Recurring protests came to a head last week, with violent clashes between demonstrators and police who used tear gas and batons to try to disperse an encampment along the 9 de Julio, the iconic artery in Buenos Aires. The day after, Macri’s coalition agreed to back the bill.

On Wednesday, thousands of people, including young children, assembled before the Argentine Congress again in anticipation of the law passing.

Elvira Villacorta, who is part of a cooperative in the Buenos Aires neighbourhood of Bajo Flores, said if it were not for social movements and the support they provide to the poor, the current government would have been overwhelmed by the crisis two years ago. 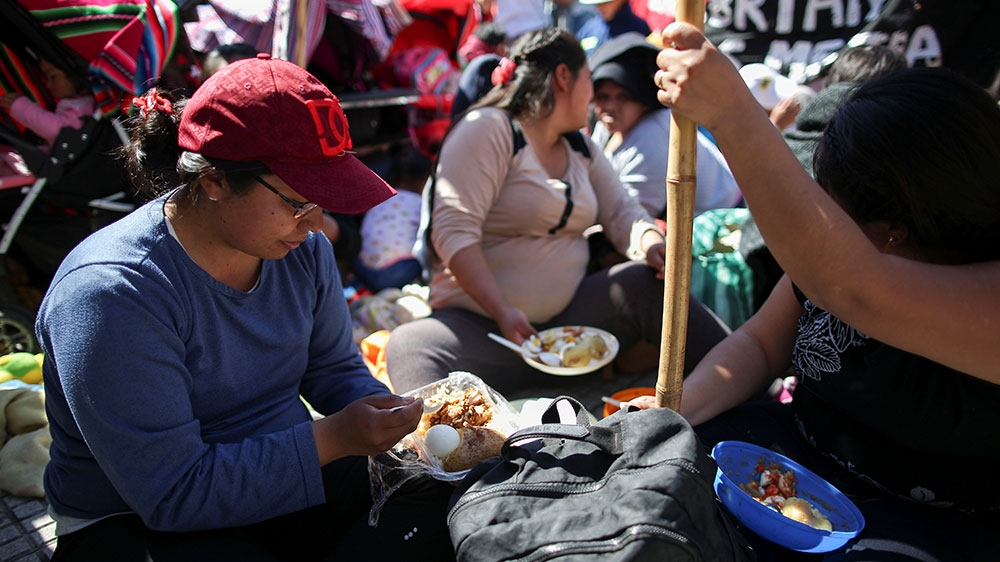 Forty people, mostly single mothers, bake bread and other goods in exchange for a 7,500 peso ($132) social plan from the government, a far cry from what the government says it costs a family of four to stay above the poverty line, which is 33,000 pesos ($584) a month. They also run a free snack counter for neighbourhood children.

“They treat us like we’re lazy, but a lot of the people work in the informal economy, as repairmen and women, or picking fruit, that is then sold in our community at more affordable prices,” said Villacorta. “They have nowhere else to turn to now but the social movements because that’s where they can get a plate of food, milk. A meagre salary, but at least it’s something.”

She referenced Juan Domingo Peron, the long-deceased populist president, and his wife Evita, whose faces were emblazoned on most of the flags carried by her comrades on Wednesday. “If there is something they taught us is our right to a life of dignity, so when an oligarchy comes around and takes away that right, we take to the streets. We don’t like it, but we don’t have a choice, we have to do it,” said Villacorta.

In a televised interview earlier this week, Miguel Angel Pichetto, Macri’s vice presidential running mate, said the picture being painted of hunger in Argentina is an “exaggeration” and that the law is not a solution.

“If it’s with the goal of achieving social calm, well, OK. But they’re not going to leave the streets. They already said the streets are theirs,” he said. 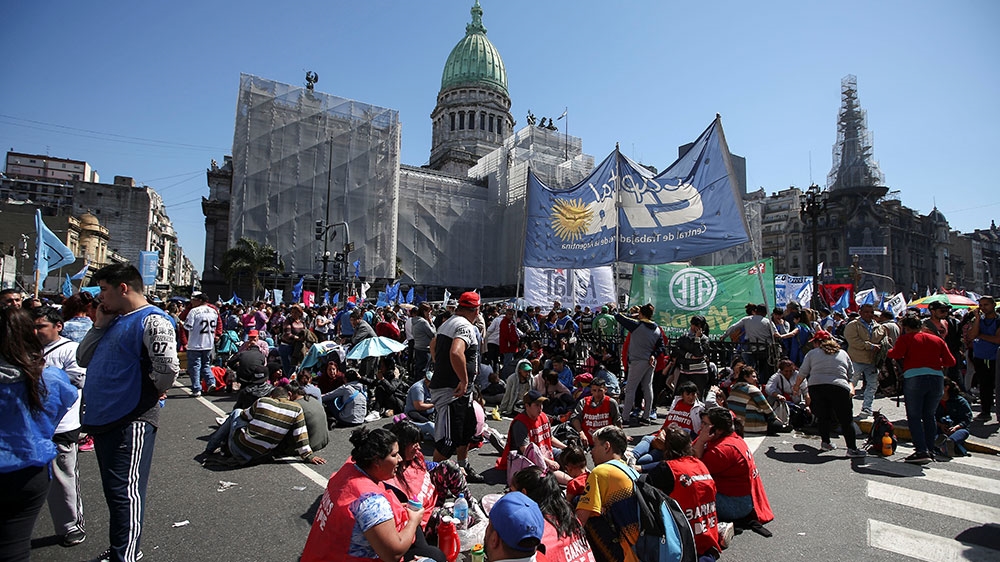 Watching from the sidelines, Leo Papurello, who manages an electronics store near the Argentine Congress, also questioned the severity of the crisis. He said in his own store, they have a hard time finding people to fill vacancies.

“Do you see someone here who is hungry? I don’t,” said Papurello, who called it the “never-ending story” in Argentina, and that the next government will have to confront the same problems.

For David Garuti, it’s a question of “re-industrialising” and opening up factories that employ people. He and his colleagues in the Hospital Frances, in Buenos Aires, joined the protest in solidarity with unemployed workers and their families, saying that no one should be going hungry in his country. He has seen the toll the crisis has taken, especially on the elderly.

“Sometimes they have to choose between eating, or buying medicine. So, this is something that affects all workers – those who are employed, those unemployed, those retired,” said Garuti.