TORONTO (AP) — Fresh off leading the Toronto Raptors to their first NBA title, Kawhi Leonard received the key to the city at Monday’s... 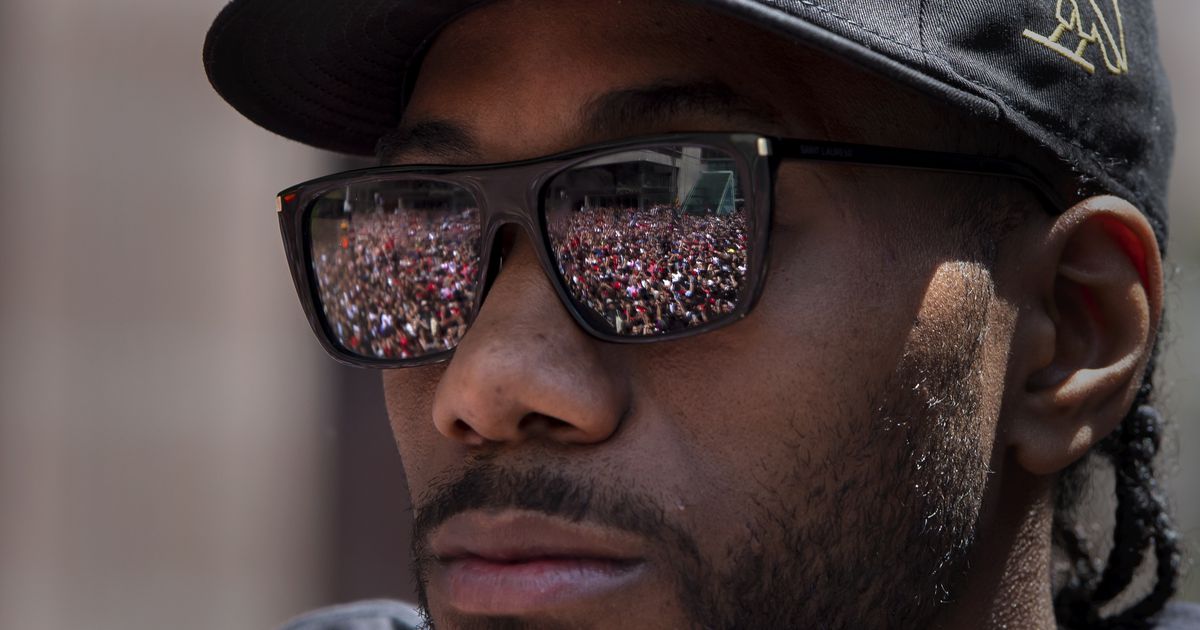 TORONTO (AP) — Fresh off leading the Toronto Raptors to their first NBA title, Kawhi Leonard received the key to the city at Monday’s championship parade.

For now, however, the two-way star and two-time NBA Finals MVP still isn’t saying whether he’ll use it to keep a door open, or close it behind him and move on.

Leonard spent several days partying with his teammates in Las Vegas and Los Angeles after last Thursday’s Game 6 clincher, returning to Toronto in time to ride in one of five open-top double decker buses that carried the Raptors along a crowded parade route.

A three-time All-Star and two-time NBA defensive player of the year, Leonard is expected to decline the player option on the final year of his contract and become a free agent. Toronto can offer him a five-year deal worth around $190 million, one year and some $50 million more than any other team.

Before stepping on stage Monday for a ceremony in the square outside Toronto’s City Hall, Leonard said he hasn’t been thinking about his future. Instead, he’s trying to extend the celebratory vibe as long as possible.

“I’m enjoying this” he said. “It’s not time to stress, it’s still time to have some fun. I’ve just been enjoying my experience.”

After precisely two months of playoff basketball, Leonard doesn’t have a lot of time left to be a fun guy — free agency gets underway at 6 p.m. on June 30.

“I’m going to take the right time,” he said. “You don’t need too many days to figure it out. We’ll see what happens. Once that time comes, then we’ll all lay the pros and cons out.”

Visibly bothered by soreness during stretches of the Eastern Conference Finals against Milwaukee, Leonard declined to say how much pain he endured en route to winning his second career title.

“We’re always battling through things,” he said. “You know, knee pains, ankles, fingers. Everybody was just grinding it out.”

Injured for all but nine games in his final season with San Antonio, Leonard played 60 regular-season games for Toronto and another 24 in the postseason, upping his minutes once April arrived.

While winning a trophy was an obvious success, Leonard said he’s enjoyed all aspects of his season north of the border, even the varied Canadian weather.

“It was a good experience, experiencing Mother Nature, all four seasons,” he said. “Man, it was a great experience. Everybody off the court was great. The fans, just meeting people in Canada. It’s been fun.”

Later, the festive mood of the event was marred by gunfire. Four people were shot, leading to a stampede. Three people were arrested and two guns were recovered, Toronto police said.

Leonard is one of three Raptors starters with uncertain futures. Center Marc Gasol also has a player option, while guard Danny Green is a free agent.

Guards Kyle Lowry and Fred VanVleet, and forward Serge Ibaka, are heading into the final year of their deals.

Ibaka and Leonard have become friends in their time together as teammates.

“I’ve been talking with him a lot during the season and in the playoffs, but after we won, I can see the man is happy,” Ibaka said. “That’s the most important. We play this sport because we want to enjoy and have fun and be happy and be somewhere people love you. I’m sure he feels that people here love him, and after this moment, that’s the most important.”

Lowry attended the parade wearing a game-worn Damon Stoudamire pinstripe Raptors jersey. Stoudamire was the first player drafted by Toronto in 1995, and won rookie of the year honors in 1996. Lowry and Stoudamire were teammates in Memphis from 2006 to 2008.