ISTANBUL — Fighting continued in northern Syria between Turkish and Syrian Kurdish fighters on Friday morning, casting further doubt on the feasibility of a... 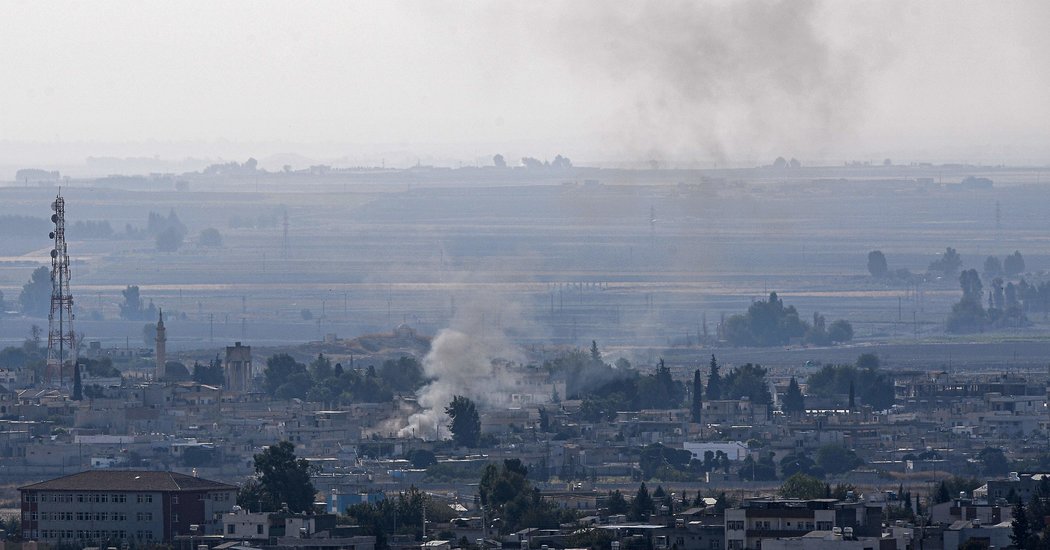 ISTANBUL — Fighting continued in northern Syria between Turkish and Syrian Kurdish fighters on Friday morning, casting further doubt on the feasibility of a cease-fire announced on Thursday by Vice President Mike Pence and Turkish officials.

The cease-fire deal had already amounted to a near victory for President Recep Tayyip Erdogan of Turkey, who appears to have outmaneuvered President Trump, since it gave the assent of the United States to a Turkish sphere of influence in northern Syria and further diminished the United States’ role in the region.

The continuation of the deadly conflict in a Syrian border town on Friday raises further questions about whether the American government has the ability to enforce the cease-fire since it is not a party in the conflict and no longer has troops posted in northern Syria.

Secretary of State Mike Pompeo, who was in Jerusalem on Friday to meet with Prime Minister Benjamin Netanyahu of Israel, did not respond to repeated questions about whether the cease-fire had been violated. A day before, he and Mr. Pence had announced the agreement in Ankara, the Turkish capital.

Asked about the cease-fire agreement, Mr. Netanyahu said only, “We hope things will turn out for the best.”

Syrian Kurdish fighters promised on Thursday night to adhere to the cease-fire and to withdraw from an area of their territory that the Turkish military has occupied in the past week, including around the key Syrian border town of Ras al-Ain. Turkey also said it would begin a five-day pause in hostilities to allow Kurdish fighters to evacuate.

But shelling and gunfire could be heard in Ras al-Ain, the Turkish news media reported, and smoke could be seen rising from the town from the Turkish settlement of Ceylanpinar, which is less than a mile away across the border.

Turkish-led forces also prevented a convoy of international aid workers from gaining access to the town to treat people wounded in the fighting, according to the Syrian Observatory for Human Rights, an independent war monitor based in Britain.

Ras al-Ain has been the site of the fiercest clashes since Turkish troops invaded Kurdish-held areas of northern Syria nine days ago. On Friday, Kurdish health officials said they were investigating whether six civilians in the town had been hit by chemical weapons during Turkish airstrikes. Photographs shared by the Kurdish Red Crescent, a medical charity working in the area, showed at least two children with burns on their faces.

The Turkish government has denied the claim, along with other accusations of war crimes. Its Defense Ministry said on Friday that the Turkish Army had continued its offensive “on the basis of humanitarian and moral values, and of international law.”

But Amnesty International, a global rights watchdog, on Friday accused the Turkish military and Arab militias fighting under its command of carrying out “serious violations and war crimes, including summary killings and unlawful attacks that have killed and injured civilians.”

At least 218 civilians in northern Syria have died since the invasion began, according to the Kurdish authorities. A further 18 have been killed in Turkey by Kurdish mortar attacks, the Turkish government said.

Turkey wants to force out the Syrian Kurdish militia that has used the chaos of the conflict to establish an autonomous region across roughly a quarter of Syrian territory. The militia is an offshoot of a guerrilla group that has waged a decadeslong insurgency in Turkey. The Turks view the group as a terrorist organization.

Since 2014, the group has operated under the protection of the United States military, which partnered with the Kurdish fighters to help sweep the Islamic State from the region and, in the process, allowed the Kurdish militia to control most of the land lining the Turkish-Syrian border.

But after Mr. Trump abruptly ordered the withdrawal of United States troops from the border this month, ending their protection of the Kurdish fighters, Turkish forces invaded with the aim of establishing a Turkish-friendly zone, roughly 20 miles deep, along the border.

The deal announced on Thursday by Mr. Pence and Mr. Pompeo effectively gave American assent to Turkish territorial ambitions in part of the area, handing Turkey a huge diplomatic victory and completing the sudden reversal of a central plank of American policy in the Middle East.

But the deal was sealed without the involvement of the Syrian or Russian governments, to whom the Kurdish authorities turned for protection after the American evacuation and the onslaught of Turkish-led forces.