IANS/Patna Federal Health Minister Harsh Vardhan yesterday stressed the need for research on encephalitis that has caused the death of 84 children in Bihar’s... 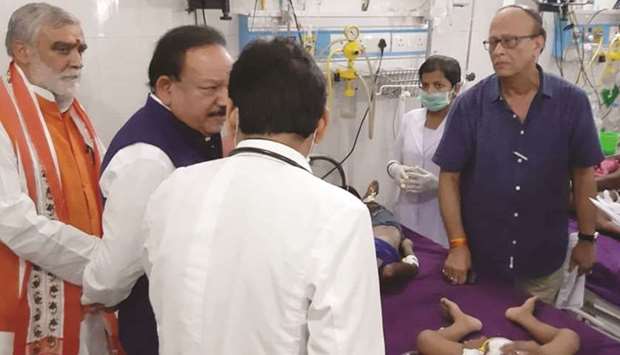 Federal Health Minister Harsh Vardhan yesterday stressed the need for research on encephalitis that has caused the death of 84 children in Bihar’s Muzaffarpur district.
“There should be research to identify the disease that is still not identified and for that research facility should be developed in Muzaffarpur,” Vardhan said after visiting the state-owned Sri Krishna Medical College and Hospital (SKMCH).
Vardhan, accompanied by Minister of State for Health Ashwani Kumar Choubey and Bihar Health Minister Mangal Pandey, visited Muzaffarpur where 84 children have died due to encephalitis in the past fortnight.
Vardhan said all branches of the medical sector should work together to control the outbreak of the disease. “We should also work with international organisations to contain the disease.”
He said all children in the affected areas should be immunised and people should be sensitised about the disease.
Vardhan, who reviewed the situation, said the central government has been assisting the state to control the situation after outbreak of the disease.
“The central government will provide all possible help including financial to the state to control the situation, provide proper treatment and develop infrastructure needed for it. It is shocking and painful that children are dying. I have felt the pain and grief of the parents,” he said.
The minister said that a new 100-bed Intensive Care Unit will be set up in SKMCH within a year to provide proper treatment to patients with symptoms of the disease.
“A timeline has been decided to work to contain and control the disease”, he said.
He said that biological laboratories in Muzaffarpur will be upgraded and new labs would be set up in the state including at AIIMS Patna.
Vardhan said hot weather with high humidity was also one of the reasons for the outbreak of encephalitis.
“I have discussed the outbreak with doctors and health officials, taken an overall comprehensive view and asked them to ensure that such situations are not repeated,” he said.
He said that he has personally seen all seriously-ill children undergoing treatment, met their parents, and discussed with them about their problems.
“I have also discussed about it in Muzaffarpur with top health officials.”
The situation is still alarming as two children undergoing treatment in SKMCH died during the minister’s visit.