Dubai2 Expo 2020 Dubai4
DUBAI: The Middle East’s first World Expo kicked off in Dubai on Thursday night, with organizers dubbing the showpiece “the event of the century.”... 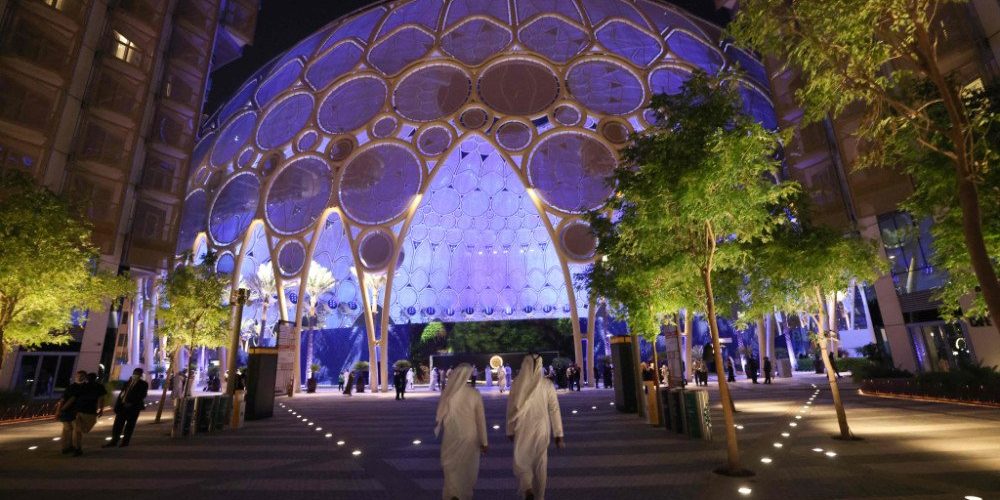 DUBAI: The Middle East’s first World Expo kicked off in Dubai on Thursday night, with organizers dubbing the showpiece “the event of the century.”

The opening ceremony of Expo 2020 Dubai streamed live to more than 430 locations across the UAE in locations ranging from airports and shopping malls to hotels and other landmarks.

The event took place in the visually stunning, 67-meter-high Al Wasl Dome, and featured an international program of music and cultural performances.

“We intended to deliver the event of the century for the country simply because failure was not an option, and we needed to live up to the expectations of Dubai and the UAE,” Tareq Ghosheh, chief events and entertainment officer at Expo 2020 Dubai, told a media briefing before the event.

Exhibitors from almost 200 countries will feature in the six-month world fair.

Dubai won the bid to host the event in 2013, making it the first World Expo in the Middle East.

The 90-minute opening ceremony was watched by VIP guests, including the UAE royal family and other dignitaries, and featured high-tech performances from UAE-based performers and international artists.

“We wanted to make sure that the story we were narrating to the world was quintessentially Emirati, but with a global DNA, and represented the themes of Expo 2020 Dubai through art and technology,” added Ghosheh.

More than 900 cast members, representing 64 nations, including the UAE, took part in the ceremony.

Auditions for roles in the opening ceremony took place in March 2021 in the UAE, Kate Randall, vice president of ceremonies and programming at Expo 2020 Dubai, told Arab News.

“We did around 42 auditions and those who were successful took part in the ceremony. These include both professionals and volunteers who have never performed before.”

The evening began with an address from Sheikh Nahyan Bin Mubarak Al-Nahyan, minister of tolerance and coexistence, and commissioner-general of Expo 2020 Dubai. Reading in Arabic, he told the story of the UAE’s founding, highlighted its belief in unity, innovation and tolerance, and said that Expo 2020 Dubai also celebrates the emirates’ 50th anniversary.

“We have always strived to create a better life, with our leaders’ vision in mind,” he said. “We have focused on investing in human development, expanding our infrastructure, diversifying our economy, and creating opportunities for everyone to prosper and grow.”

The opening ceremony marks the start of one of the largest international events since the outbreak of the global pandemic.

“Our mere presence here, amid all the challenges the world is facing, is proof of our keen commitment and desire to make the world a better place for all,” Sheikh Al-Nahyan added. “By hosting Expo 2020, we aim to convey a message of tolerance and that we are willing to collaborate with all of the world.”

Expo 2020 Dubai will bring 192 nations together for the first time in the 170-year history of World Expos. Each will be represented by its own pavilion under the policy of “one nation, one pavilion.”

The opening ceremony highlighted the UAE’s message of tolerance and hope for the future with a dazzling three-act show directed by Belgian theater director Franco Dragone.

Performers dressed in elaborate costumes and high-tech attractions added to the spectacle.

The performance featured Mira, a young Emirati girl representing hope for all people. Throughout the ceremony she appeared wearing a long traditional Emirati pink robe embellished with golden jewelry.

Conceived to focus on Expo 2020 Dubai’s theme of “Connecting Minds, Creating the Future,” the ceremony delivered a story of humanity and the planet. Spectators were guided by Mira, who spoke of the beauty and power of the human spirit, and its ability to connect all people and elements from the natural world.

The final act, “Creating the Future,” reflected themes of living in harmony and humanity’s opportunity to create a “perfect garden.”

A moving performance by Bocelli brought the evening to a close. As the tenor’s voice echoed around Al Wasl Dome, an illuminated tree could be seen rising from the stage, while performers dressed in elaborate costumes danced triumphantly.

Guests remarked on the emotional power of the performances. “It was so breathtaking, I don’t know what to say,” one could be heard saying as she left the ceremony.

“It was such a feat to pull off; they worked so hard,” said another.

Dubai media personality Rosemin Madhavji told Arab News: “It was a beautifully curated selection of artists, and I loved the storytelling element. Everything was so smooth, from the greetings by staff through to the security.”