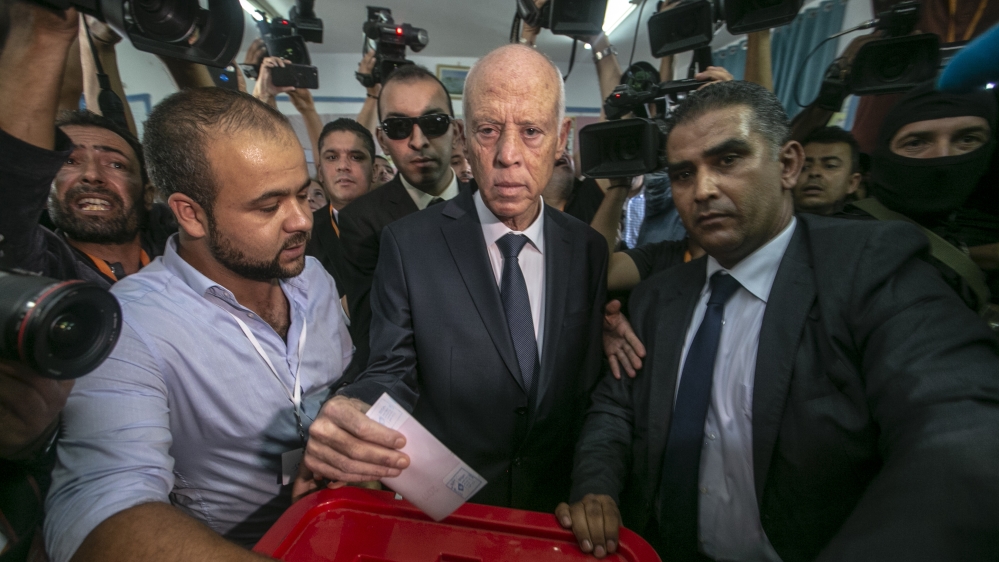 Polls carried in Tunisian media on Sunday projected that Saied would win with between 72 and 77 percent of the vote. His opponent, Nabil Karoui who was in jail for most of the campaign, was forecast to win between 23 and 27 percent.

The publication of the exit polls triggered celebrations at Saied’s election campaign offices in central Tunis, as fireworks were set off outside and supporters honked car horns.

The turnout stood at 38.2 percent three hours before the voting ended, the electoral commission said at a press conference, adding that the participation was higher than that in last week’s legislative elections.

About 7.2 million people were registered to vote, with more than 4,500 polling stations across the country.

It has been less than a decade since Tunisia, the origin of the 2010-11 Arab Spring revolts, toppled its long-time autocratic government in favour of democratic elections.

Social unrest, attacks by armed groups and an economic slowdown have afflicted the country on its fledgling democratic path. The unemployment rate is about 15 percent.

Saied, 61, is an independent with no political experience. He has pledged to fight corruption and support
decentralisation.

Karoui, 56, has been tarnished by corruption allegations which he denies. He was released from jail on Wednesday after spending more than a month in custody on money laundering and tax evasion charges.

The media mogul presents himself as an advocate of Tunisia’s poor and marginalised as the head of the recently founded centre-left Heart of Tunisia party.

Both topped the election’s first round on September 15, defeating contenders from mainstream political parties.

The two self-styled political outsiders’ electioneering has been very unusual, with Karoui having been released only four days before the final round.

Saied had kept a low profile since the first round and later announcing that he would stop campaigning for “ethical reasons” related to the lack of equal opportunity between the two candidates.

The presidential election, originally scheduled for November, was pushed forward by the death of Tunisia’s first democratically elected president, Beji Caid Essebsi, in July, five months before the end of his term.

Last week, Tunisia held its legislative elections, in which Karoui’s Heart of Tunisia party came second with 38 seats, while the Ennahda movement has emerged as the strongest force with 52 seats in the 217-member parliament.

Tunisia has been under pressure from international lenders, mainly the International Monetary Fund, to take drastic measures to revamp its economy.