Britain and Germany added their voices to growing international condemnation of Israel on Tuesday over the demolition of Palestinian homes near Jerusalem, saying the... 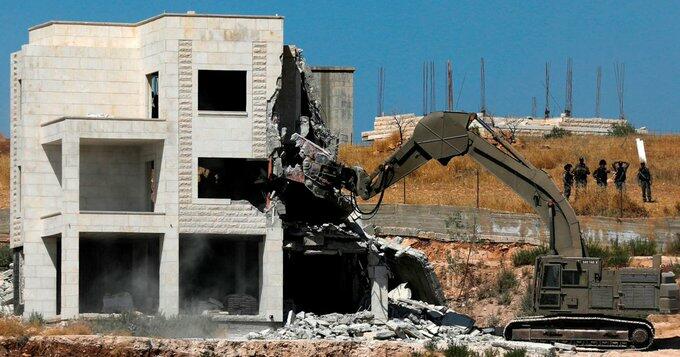 Britain and Germany added their voices to growing international condemnation of Israel on Tuesday over the demolition of Palestinian homes near Jerusalem, saying the destruction was “particularly egregious”.

The five European Union members of the UN Security Council, which also include France, Belgium and Poland, released a statement following a council meeting on the Middle East.

“We as member states of the European Union strongly condemn the demolition by Israel of Palestinian buildings in the district of Wadi al Hummus, in the south east of Jerusalem,” they said.

“In all but the most exceptional of circumstances, demolition in occupied territories is contrary to International Humanitarian Law and to UNSC resolutions,” the statement added.

The EU countries said demolitions cause “unnecessary suffering to ordinary Palestinians and is harmful to the peace process.”

Israel said on Tuesday that a total of 12 Palestinian buildings it considered illegally constructed were demolished in Monday’s controversial operation.

The Palestinians immediately slammed the demolitions in the Sur Baher area which straddles the West Bank and Jerusalem, but Israel has defended the move as essential to its security.

The EU backed the Palestinian view that in the land in question, according to the Oslo peace accords, “all civil issues are under the jurisdiction of the Palestinian Authority.”

Israel says the homes were built too close to its separation barrier cutting off the occupied West Bank, posing a security risk, and the demolitions were approved by its supreme court following a lengthy process.

But the five EU countries – plus Estonia which is a forthcoming EU member of the Security Council – described the demolitions as “particularly egregious.”

They noted that several of the buildings were located in areas meant to be under Palestinian Authority civilian control under the Oslo accords of the 1990s.

“They set a dangerous precedent that directly jeopardises the two state solution,” the statement read.

A preliminary assessment by the UN found that 24 people were displaced in Monday’s destruction.

Palestinians accuse Israel of using security as a pretext to force them out of the area as part of long-term efforts to expand settlements and roads linking them.

They also point out that most of the buildings are located in areas meant to be under Palestinian Authority civilian control under the agreements between the Palestinian and Israeli governments.

The Palestinian government said the demolitions were a breach of all agreements they signed with Israel.

“What is painfully happening here is the biggest and most dangerous demolition operation outside of war operations,” Walid Asaf, the Palestinian minister in charge of monitoring Israeli settlements, said in a video from the site.

“This operation aims to cut off Jerusalem from Bethlehem (in the southern West Bank),” he added.

Israel began construction of the barrier during the bloody second Palestinian intifada, or uprising, in the early 2000s and says it is necessary to protect against attacks.

The International Court of Justice in 2004 deemed the wall illegal and demanded that construction must stop and Israel should pay reparations for any damage caused.

The majority of the wall is built inside the occupied West Bank and is expected to reach 708 kilometres upon completion.

On June 18, residents in Sur Baher received a 30-day notice from Israeli authorities informing them of their intent to demolish the homes.

Israel has demolished some 63 Palestinian housing units in the first half of this year in East Jerusalem, compared to 37 during the same period last year.

Residents fear another 100 buildings in the area in a similar situation could be at risk in the near future.

It is extremely difficult for Palestinians to receive construction permits from Israeli authorities in areas under their control, and Palestinians and rights activists say a housing shortage has resulted.