Abu Dhabi’s Etihad Airways is predicting a return to “modest growth” next year – at least in terms of kilometres travelled – the airline’s...

Abu Dhabi’s Etihad Airways is predicting a return to “modest growth” next year – at least in terms of kilometres travelled – the airline’s CEO told Arabian Business.

The UAE national carrier earlier this month reported a loss of $1.28 billion for 2018. While this was its third billion dollar loss in as many years, it was 15.4 percent lower than losses reported in 2017 and around a third less than reported two years ago.

While passenger numbers dropped 4.3 percent to 17.8 million over the same period and the number of available seat kilometres fell from 115 billion in 2017 to 110.3 billion last year, CEO Tony Douglas is confident the airline will be back in a positive direction next year.

“We would probably expect to return back to growth in 2020, but it will be modest growth…. in seat kilometres,” he told Arabian Business in an interview.

Douglas has managed to trim the airline’s losses by reducing total costs by $416 million to $6.9 billion.

Direct operating costs were reduced by $226 million, despite ongoing volatility in the oil market, and administration and general expenses declined by $190 million, mainly as a result of lower indirect manpower and other administration savings. 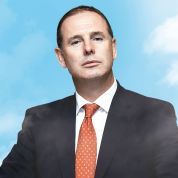 Tony Douglas has had years of experience at the helm of some of Abu Dhabi’s largest companies, but his newest challenge is to turn around the fortunes of national carrier Etihad Airways, and, so far, things appear to be moving in the right direction

“What I would say, the trajectory is what I was teasing out, the 34 percent over the last two years. So, in one way, that gives the sense that we are making the right steps in the right direction.

“We are very open in the knowledge that we still have a lot to do… Did you get lucky, or is this a function of hard graft? If you look at the ratios in there, yields [usually calculated as revenues per passenger kilometres] increased by 4 percent – that is by taking lossmaking routes out – cost has improved by 3 percent and I’m not including a massive increase in fuel. I guess it a clichéd way of describing it: in the world where little rocket science exists these days, it is back to basics.”

One of the areas Douglas has taken a much more micromanaged approach is in route strategy. Last year, a number of unprofitable routes were discontinued, including Tehran, Jaipur, Entebbe, Dallas / Fort Worth, Ho Chi Minh City, Dhaka, Dar es Salaam, Edinburgh and Perth.

“We did that because we are being far more dynamic and disciplined now, in which we look at route profitability and if we don’t believe [a route] is sustainable we will no longer maintain it for the sake of maintaining it,” Douglas said.

“Equally, there are additional routes where we think there is opportunity that we [can] put more on. There is no rocket science behind it. I have been involved in aviation in one way or another for over 30 years and I guess way back then the networks were probably analysed once a year kind of thing.

“I am with the persuasion that it needs to be a daily, weekly kind of thing, the market is so dynamic. Therefore, what you are seeing, and I hope you will see going forward, is an Etihad that is far more agile with what is going on with the market.”

That’s not to say the airline hasn’t added routes or boosted capacity. It added Baku and Barcelona last year and it said that both routes have “outperforming forecasts”. Frequencies have also been increased on some popular routes, including Toronto, Amman, Rome and the Maldives and larger aircraft have been deployed on Cairo, Casablanca, Jeddah, Rabat, Geneva, Kuala Lumpur, Rome, Paris, Jeddah, Beijing, Nagoya and Seoul Incheon.

“The whole network dynamic is something we review weekly, therefore, over the course of this year, certain opportunities will present themselves,” Douglas added.

Read the full interview with Tony Douglas here, where he talks about renegotiating airline order contracts with Airbus and Boeing, revamping the airline’s offering and the future of its previous strategy of buying stakes in international carriers.