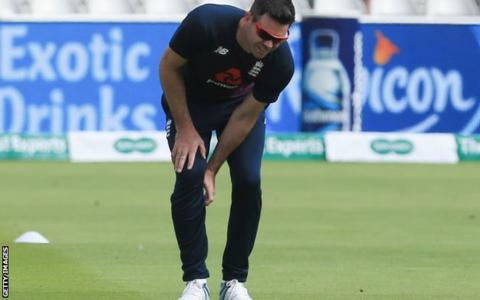 This post was originally published on this site England bowler James Anderson will miss next week’s second Ashes Test at Lord’s due to the...

England bowler James Anderson will miss next week’s second Ashes Test at Lord’s due to the calf injury that curtailed his involvement in the series opener.

The 37-year-old was passed fit for the Edgbaston Test despite hurting the same calf playing for Lancashire last month.

But Anderson managed just four overs on the opening morning before aggravating his right calf and did not bowl again as Australia won by 251 runs.

England’s record Test wicket-taker will be “reassessed on an ongoing basis”.

His absence in the second game against Australia could see pace bowler Jofra Archer, who was left out of the opener in Birmingham, make his Test debut in the match that starts on August 14.

A statement from the England and Wales Cricket Board said Anderson had undergone a MRI scan after “tightness to his right calf”.

“As a result of the injury, he will commence a rehabilitation programme working with the England and Lancashire medical teams,” added the ECB.

Anderson’s injury is confirming what we knew but to be ruled out of next week’s Test so early suggests he is some way from returning.

All the more important, then, that Archer comes through his fitness test playing for Sussex second XI this week.

He needs to prove categorically that he is fit enough to stand the rigours of a five-day Test. If so, he will add some welcome pace to England’s attack.

The selectors have a lot to think about before the weekend – Jason Roy, Joe Denly, Moeen Ali, Jonny Bairstow. It seems too early to make sweeping changes, but England must carefully consider their options.