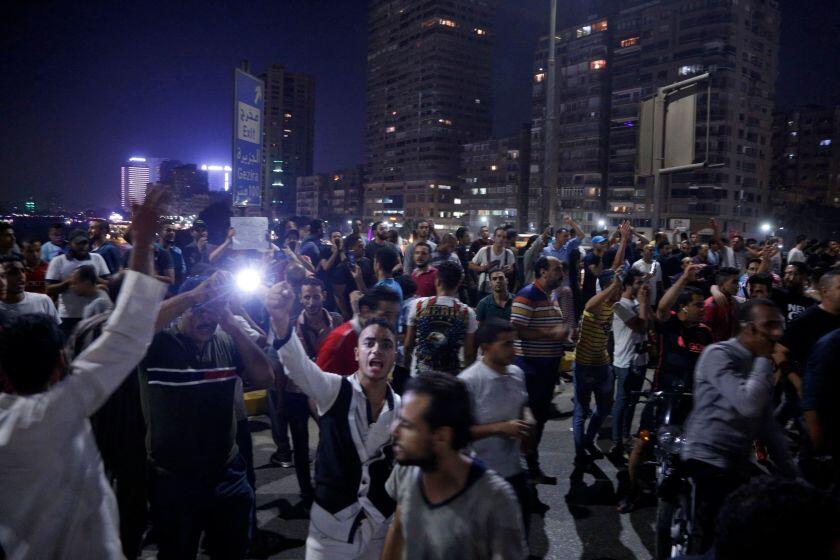 The rare protests broke out in defiance of a ban on demonstrations after an exiled Egyptian businessman in Spain accused the president and the military of rampant corruption.

The rallies calling for Sisi’s removal briefly struck a chord with Egyptians who have been bearing the brunt of stringent economic reforms introduced in 2016.

In his first official reaction, Prime Minister Moustafa Madbouly denounced the protests as part of an external “brutal war” designed to create “confusion”, in an address before parliament.

He also warned of the dangers of any future large-scale dissent.

“The people of Egypt will not allow the scenario of chaos to be repeated again,” Madbouly said, implicitly referring to the 2011 revolution that unseated long-time autocrat Hosni Mubarak.

Authorities have detained around 3,000 people over the last three weeks including prominent academics, activists and lawyers.

Rights groups maintain the arrests are part of one of the worst crackdowns since Sisi took power in 2014.

But Madbouly insisted “the state’s agencies moved within the boundaries of the law”, at the end of his 40-minute speech.

“I am praising Egypt’s brave policemen who dealt with this matter decisively… We didn’t hear of any breaches or any major problems in this issue,” he said to loud applause from lawmakers.

Egypt passed a restrictive anti-protest law in 2013 after Sisi led the military ouster of Islamist president Mohamed Morsi and a renewable state of emergency remains in force.

President Sisi regularly invokes his track record of bringing relative stability in a turbulent region and boosting the economic outlook after introducing harsh austerity reforms in 2016.

Egypt devalued the pound and slashed subsidies three years ago in its bid to secure a $12 billion loan from the International Monetary Fund (IMF).

Foreign reserves have been replenished at record-levels, reaching over $45 billion last month and the pound’s value is slowly rebounding.

Madbouly acknowledged the economic pressures affecting Egyptians but said that “building a country” was an arduous process requiring a large budget.

Mohamed Ali, who fled Egypt to Spain earlier this year, ignited a protest movement in Egypt last month, when he revealed that President Sisi had contracted his company to build several luxurious palaces for himself using public money, coinciding with the government enforcing tough austerity measures on the public.

The scandal has been dubbed “Palacegate”. Sisi acknowledged that he had been building palaces but said he was building them for the Egyptian state rather than himself. In a Facebook post last week, he also said that he would pay more attention to the conditions of poor people in Egypt.