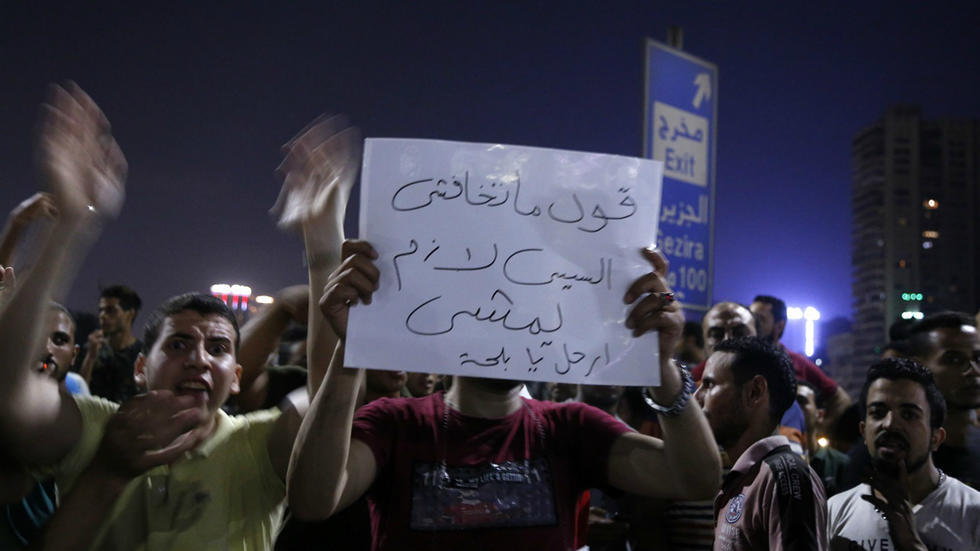 It is necessary for Egyptian authorities to start immediate reforms to reduce pressure on those with limited incomes and allow for more freedoms, they said.

“The protests were limited but they delivered a strong message about the presence of discontent among members of the general public,” said Mustafa Kamal al-Sayyid, a political science professor at Cairo University. “I am afraid they will happen again if the government does not start introducing political and economic reforms.”

The late-September protests were the first in Egypt in years. They defied Egypt’s anti-protest law, which requires official authorisation for public assemblies.

Hundreds of demonstrators took part in protests in several cities, including Cairo, the textile hub of El Mahalla and the northern coastal city of Damietta. The protesters called for the ousting of Egyptian President Abdel Fattah al-Sisi and complained of high food prices.

The demonstrations followed the release of videos by a construction contractor who worked with the Egyptian Army for years. Mohamed Ali, who lives in Spain, accused Sisi of constructing luxurious palaces while the Egyptian people suffered acute poverty. He said the army was dominating Egypt’s economic life.

The Muslim Brotherhood used Ali’s videos and the anger they engendered among the public to incite Egyptians against Sisi but there was already unrest among the public because of Sisi’s policies, analysts said.

“There is almost no tolerance to freedoms. The noose is being tightened around rights advocates and the conditions of the civil society cannot be worse,” Sayyid said.

Rights groups refer to thousands of political prisoners in Egypt’s jails, even as Egyptian authorities say those in the prisons had committed criminal offences. If that is true, Egypt must justify the reported arrest of hundreds of peaceful demonstrators, analysts said.

Sisi became president when food import costs were depleting Egypt’s foreign currency reserves, the parallel market absorbed much of the foreign currency in the market and subsidies crippled the state treasury. Those conditions scared off investors and threatened to leave Egypt incapable of securing its food needs.

The projects created demand for construction materials, provided millions of jobs and returned thousands of factories to production again after years of recession.

“Most of the positive results of the reforms were on paper only,” said Rashad Abdo, an economics professor at Cairo University. “As for citizens, these results have not improved their lives or economic conditions.”

For the average Egyptian, however, the reforms were catastrophic. The liberalisation of the exchange rate of the Egyptian pound caused food prices to triple, making millions of people incapable of meeting their simplest of needs.

Egyptians must pay more for their bills, even as salaries of around 6 million civil servants and millions of private-sector workers remained the same. An official report in August said the national poverty rate had jumped to 32.5%.

“The government should have made more effort in shielding the poor against the negative effects of these reforms,” Abdo said.

Social protection programmes, including one that offered cash aid to tens of thousands of poor families, strive to do that.

However, the government apparently needs to do more. The parliament is expected to summon the prime minister to inquire about the government’s plan to prevent public anger from growing and ease backlash from the reform programme.

“The government runs a huge risk if it does not address all these problems,” said Bassant Fahmi, a member of the Economic Affairs Committee in the Egyptian parliament. “Failure in action will pose real dangers to our social peace and political stability.”