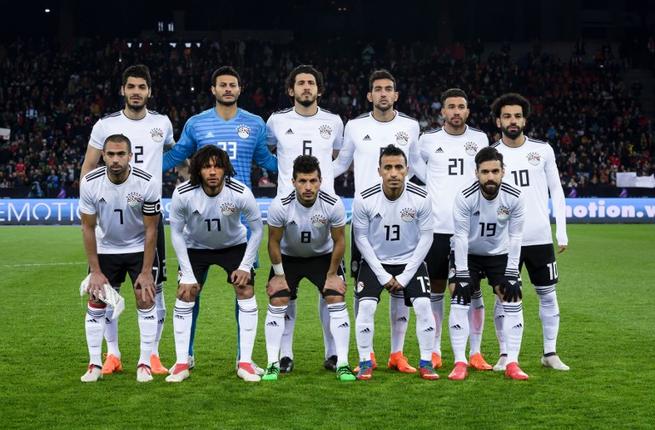 The Egyptians flew to Nigeria from Niamey, capital of Niger Republic, where they played their last game in the Africa Cup of Nations qualifying series.

The Pharaohs who already qualified for the 2019 AFCON that they are hosting this summer, drew 1-1 with hosts Niger Republic on Saturday in one of the final-day AFCON qualifying matches.

The Egypt delegation has 24 players among whom is Arsenal midfielder, Mohamed Elneny, who will now be facing his club teammate, Alex Iwobi, in Tuesday’s friendly

Egypt also came in with 21 technical and backroom staff and five journalists who are all accommodated at the Golden Tulip Hotel.

The Pharaohs will train at the Stephen Keshi Stadium on Monday evening, after the Africa U23 Cup of Nations qualifier between Nigeria and Libya.

Egypt’s perfect run under coach Javier Aguirre came to an end after Saturday’s 1-1 away draw against Niger in the last round of the African Nations Cup qualifiers.

The Pharaohs, who have already booked a place in Africa’s flagship tournament with one match to spare, finished second in Group J with 13 points, three behind leaders Tunisia.

Egypt was granted the tournament’s hosting rights in January after Cameroon was stripped of those rights in December.

With the Mexican coach at the helm, Egypt had won all their qualifying matches; crushing Niger 6-0, and beating Tunisia 3-2 before the latest stumble in N’Djamena.

It is expected that the Egyptians will want to preserve their unbeaten record under their new coach as they face Nigeria having seen their perfect run halted.

In head-to-head confrontations, Egypt has an edge over Nigeria; having won eight of the 20 encounters while Nigeria has won five.