The war that has devastated Yemen reached into Saudi Arabia early Saturday, with drone strikes on two major Saudi oil refineries, and a claim... 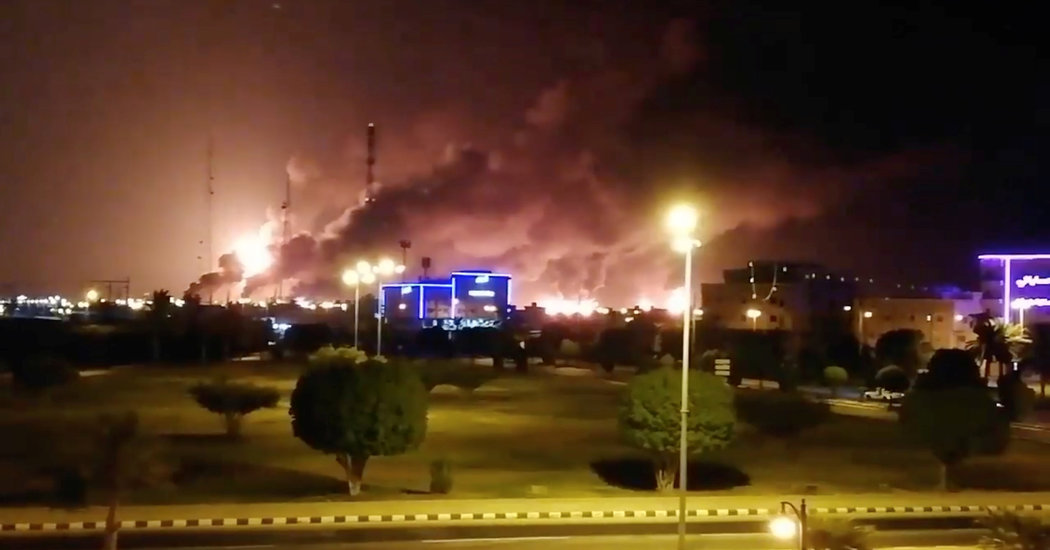 The war that has devastated Yemen reached into Saudi Arabia early Saturday, with drone strikes on two major Saudi oil refineries, and a claim of responsibility from Yemen’s Houthi rebel faction.

There were no reports of casualties and the extent of the damage was unclear, but the attacks struck deep within Saudi territory, at the core of the country’s economy. They came just as Saudi Aramco, the state-owned oil giant, accelerated plans for what could be the largest initial public offering of stock in the world, an event closely watched by investors globally.

The Saudi interior ministry reported fires at Aramco’s Abqaiq and Khurais refineries before dawn on Saturday, and later said they had been attacked with drones. In a statement, the ministry said both fires had been “controlled and contained,” the Saudi-owned news network Al Arabiya reported, but gave no further detail.

A Houthi spokesman, Brig. Gen. Yahya Sare’e, said in a statement broadcast by Al-Masirah, the faction’s news organization, that the group’s forces “carried out a massive offensive operation of ten drones targeting Abqaiq and Khurais refineries.”

Between them, the two plants can process 8.45 million barrels of crude oil a day, amounting to the vast majority of the production in Saudi Arabia, which produces almost one-tenth of the world’s crude oil.

The Houthis — supported by Iran, the kingdom’s chief foe in the region — have tried to take the fight to Saudi Arabia before, though their efforts have been pinpricks compared to the devastation in Yemen.

The attack on Saturday appeared to be an escalation — General Sare’e said it was one of the largest operations the Houthis have mounted in Saudi Arabia, and it reached deeper than before into the kingdom, some 500 miles from Yemeni territory.

The war in Yemen began in 2015, when Houthi rebels ousted the established government from most of the country. Saudi Arabia and the United Arab Emirates, with some support from the United States, then entered the fighting to push the Houthis back.

The conflict has killed thousands of civilians — many of them in Saudi airstrikes using American-made weapons — while grinding to a stalemate. It has created the world’s worst humanitarian crisis, put millions of people at risk of starvation and left millions of others homeless.

In a report presented to the United Nations Human Rights Council in Geneva this week, a panel of experts said both sides in the conflict were committing horrific human rights abuses including arbitrary killings, rape and torture, with impunity. The atrocities underscored the collective failure of the international community, the panel said.

After a period of relative calm, following a cease-fire brokered late last year, tensions have escalated again in recent months. Houthi forces attacked Saudi pipelines and other oil infrastructure in May, temporarily halting the flow of crude oil, and in June they struck an airport in Saudi Arabia, wounding dozens of people.

In July, in a major blow to the Saudi-led coalition, the United Arab Emirates, which had been providing arms, money and, crucially, ground troops in Yemen, announced a rapid pullout from a conflict that had become too costly. The move left diplomats and analysts wondering whether Saudi Arabia would continue the war on its own.

Although the Trump administration has been a vocal supporter of Saudi efforts to deter Iran and its allies in the region, congressional opposition to the sale of arms and the deployment of extra troops in Saudi Arabia has limited the scope of support from the United States.