Business and finance Feb 5th 2019 IN MOST job interviews, candidates gush and enthuse about the institution they hope to join. The World Bank’s... 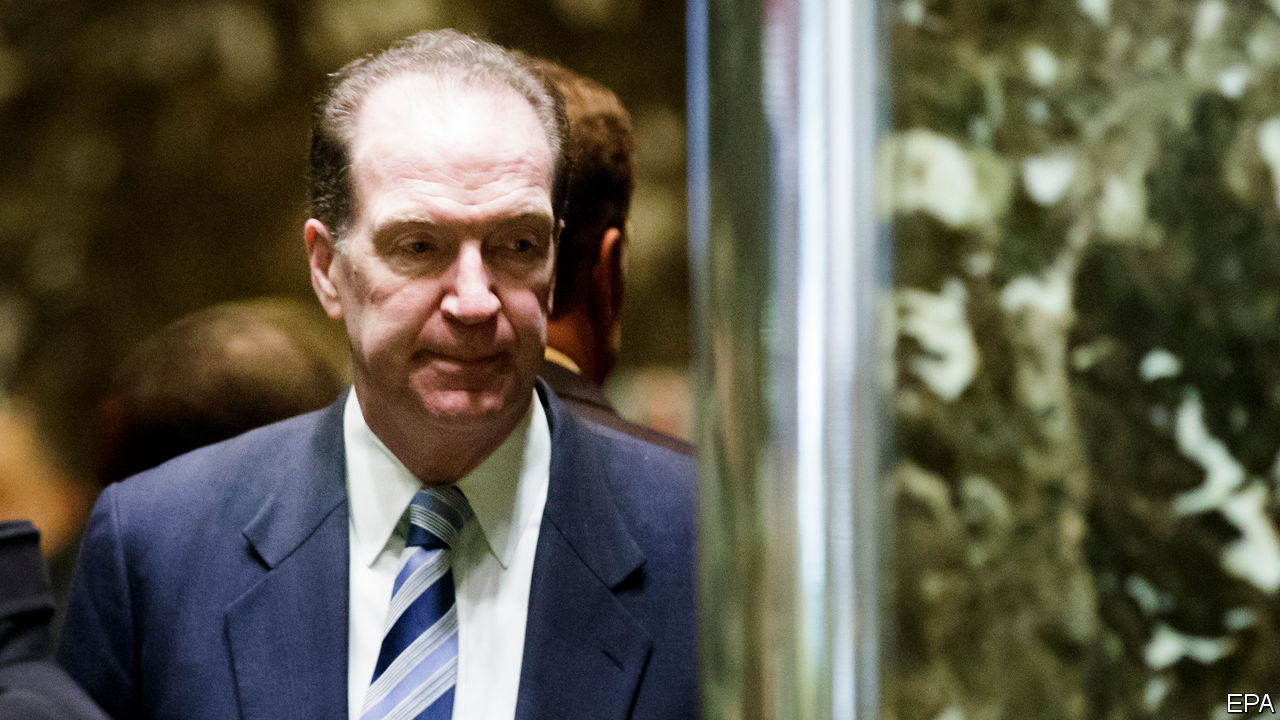 IN MOST job interviews, candidates gush and enthuse about the institution they hope to join. The World Bank’s board can expect to hear few warm words from David Malpass, whom President Donald Trump is expected to nominate this week to lead it. In his current role handling international affairs at America’s Treasury, Mr Malpass has described the bank as part of a “giant sprawl” of international organisations that create “mountains of debt without solving problems”.

Two strands of thought shape his view: a conservative disdain for big, unaccountable bureaucracies and a hawkish distrust of China’s growing international ambitions. Awkwardly, the two are in tension with each other.

Like many conservatives, Mr Malpass worries about state institutions that do not have to prove their worth in the marketplace. (He was once chief economist of Bear Stearns, a financial institution that spectacularly failed its own market test.) This concern is magnified when the public-sector entity is multilateral and not answerable to any single government. He has criticised the bank and other similar organisations for “mission creep” and for prioritising their own growth over that of their clients. Last year the White House agreed to increase the World Bank’s capital only on the condition that it restrain salaries and impose additional limits on its lending.

The bank’s sprawling mission is, however, the fault of its owners—member governments—as much as of its staff. At gatherings like the G20, presidents and prime ministers cannot resist inviting the bank to involve itself in new initiatives, blueprints or facilities, tackling everything from ebola to e-commerce. A truly unaccountable bureaucracy could say no. The World Bank rarely does.

Mr Malpass has been working with “like-minded governments” to narrow the G20’s focus. But it is easier to complain about a menagerie of mandates than it is to kill any government’s pet project. Mr Malpass himself wants to enlist the World Bank in a new “debt-transparency initiative” that will shed more light on the international liabilities of the world’s governments—a worthy cause, no doubt, but one that will add to the bank’s responsibilities. Thus does its creeping mission creepeth.

Like many hawks in Washington, Mr Malpass also worries about China’s growing global influence. He has been harshly critical of its Belt and Road Initiative (BRI), which aims to build infrastructure and other links across scores of countries in central Asia, the Indian Ocean and beyond. In his view, China overlends to fragile countries, builds ill-conceived projects with its own firms and then takes ownership of the assets when governments default.

Many analysts who share Mr Malpass’s anxieties about debt-trap diplomacy want China to work more closely with existing multilateral lenders and to adopt their norms and lending practices. But Mr Malpass seems unusually ambivalent about this kind of co-operation and assimilation. “China has made substantial inroads into the [multilateral development banks] that are worrisome,” he told America’s Congress in December. The World Bank has a fund that works with the BRI, he pointed out, and the Inter-American Development Bank has co-financed projects with Chinese lenders. Unlike most observers, he seems to worry that China might learn too much, not too little, from the multilateral lenders. “China is absorbing decades of financial know-how into its institutions in a few short years, a similar pattern to its absorption of manufacturing technology,” Mr Malpass complained.

When Jim Yong Kim said last month he would step down as president of the World Bank three years early, some hoped for a proper succession fight. They were tired of the anachronistic convention that allows an American to head the World Bank and a European to lead the International Monetary Fund. But it soon became clear that America would get its way as long as Mr Trump nominated a “credible” candidate.

Is Mr Malpass such a candidate? He is the kind of character a previous Republican president might have nominated. He speaks four languages and has worked for three administrations. He has been wrong on a number of big economic questions—too complacent about financial risks before the 2008 crisis, then too paranoid about the dangers of monetary easing after it—but wrong in that reassuringly conventional way that does little damage to a person’s standing in elite circles. Besides, monetary policy is the IMF’s job.

His appointment will also revive China’s fears that the existing international institutions will never truly accommodate it. But policymakers in Beijing may calculate that Mr Malpass is less dangerous at the World Bank than at the Treasury, especially if he seeks to curb the bank’s limited powers further. A determined China hawk could lead the World Bank on an expansive drive to compete with China’s chequebook diplomacy. A cost-cutting crusader could stringently curtail the bank’s budget and ambitions. Someone who is torn between these two tendencies will probably do neither.