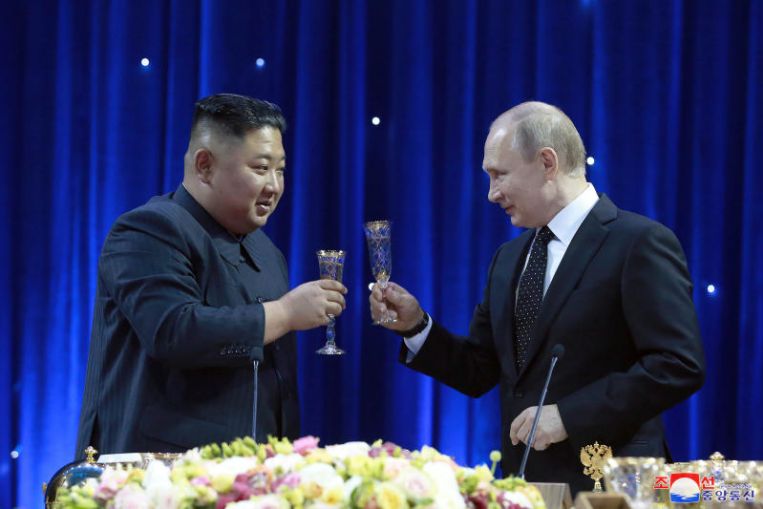 SEOUL (THE KOREA HERALD/ASIA NEWS NETWORK) – It is almost certain that denuclearising North Korea will take a long time.

The other is the sombre first anniversary on Saturday of the summit between Kim and South Korean President Moon Jae-in, which helped set the stage for Kim’s historic meeting with US President Donald Trump.

It is not hard to guess why Kim visited the Russian city of Vladivostok to meet Russian President Vladimir Putin.

After the collapse of his second meeting with Trump in Hanoi in February, Kim needed to increase the North’s leverage against the US by enlisting Putin’s support.

Putin, of course, had his own interests to pursue.

He wants to increase Russia’s influence over North Korea so that he can play the Korean card in dealings not only with the US but also with Russia’s former communist ally, now its rival, China.

Of course, the bigger benefactor is Kim.

Kim, who already met Chinese President Xi Jinping four times last year when the US-North denuclearisation talks were in full swing, made it clear that he would resist the US demand for full disarmament on the back of the North’s alliances with China and Russia.

North Korean media stated that in his talks with Putin, Kim blamed Washington’s “unilateral” attitude for the breakdown of his February meeting with Trump and for the current stalemate in the denuclearisation negotiations.

In other words, Kim said he would take no concrete action on disarmament unless the US made concessions first.

Putin was definitely on Kim’s side. He indicated that Russia just might grant the North’s request not to comply with a UN resolution that requires Moscow to expel its North Korean workers.

In a post-summit news conference, Putin said he and Kim had discussed the issue “from the humanitarian perspective.”

He said North Korean workers in Russia – now estimated at about 100,000 – were “good, hardworking and orderly” people and that there might be a non-confrontational solution.

The Hanoi talks fell through because Trump wanted a “big deal”, entailing the full dismantlement of the North’s nuclear weapons and other weapons of mass destruction, as a condition for lifting sanctions.

In contrast, the North insisted on phased disarmament – on a deal for the US to remove some of the sanctions in return for corresponding actions from the North.

Putin and Kim also discussed another issue that could further complicate the denuclearisation talks.

Putin said in the news conference that North Korea wanted to denuclearise, but also wanted a security guarantee.

The US and South Korea alone cannot provide the security guarantee mechanism sought by the North, Putin said, instead proposing multilateral negotiations such as six-party talks involving the two Koreas, the US, Japan, China and Russia.

But given past experience, revival of the six-party talks – which started in 2003, but have been on hiatus since the sixth round in 2008 – would only complicate the denuclearisation talks and delay progress.

Their revival would also benefit the North, which is already showing signs of backing away from its denuclearisation commitment and toughening its rhetoric against the US – and even against South Korea.

North Korean media reported that in talks with Putin, Kim had warned that the situation on the Korean Peninsula was at a critical point and might return to its “original state” because the US adopted a unilateral stance and acted in bad faith in Hanoi.

The fact that the North, which is raising its voice to criticise the South Korean government, rejected the South’s proposal to hold a joint celebration to mark the first anniversary of the first Moon-Kim summit also does not augur well for inter-Korean relations and the denuclearisation process.

All these developments should inspire the concerned parties – not least President Moon, who said he would seek another meeting with Kim to resolve the nuclear deadlock – to work hard to revive the momentum and accelerate the denuclearisation talks between the North and the US.

The Korea Herald is a member of The Straits Times media partner Asia News Network, an alliance of 23 news media organisations.