Demonstrations are taking place across the UK against Boris Johnson’s decision to suspend Parliament in the run-up to Brexit. Organisers are hoping tens of... 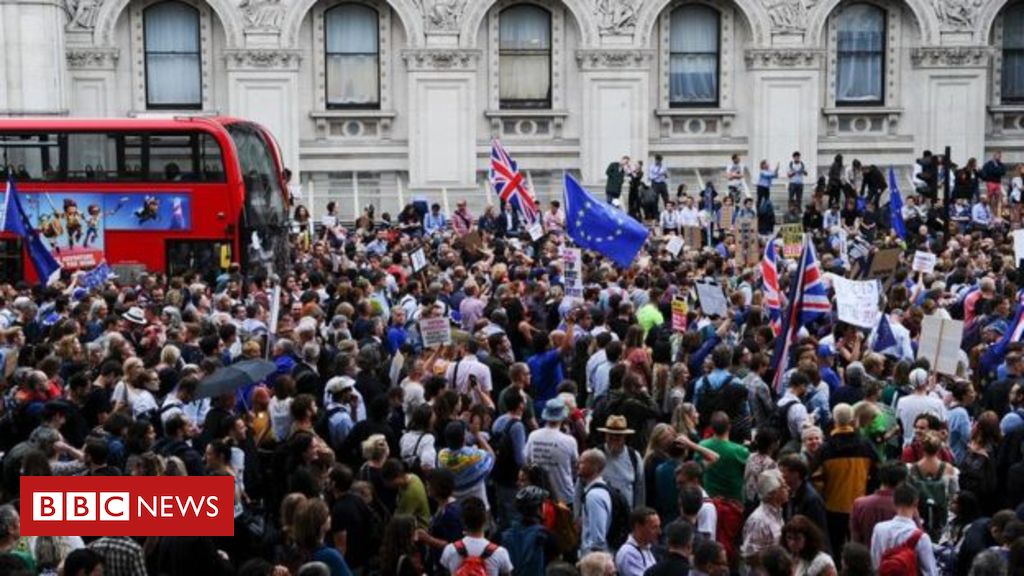 Demonstrations are taking place across the UK against Boris Johnson’s decision to suspend Parliament in the run-up to Brexit.

Organisers are hoping tens of thousands of people will take to the streets after a series of demonstrations on Friday evening.

Protests are underway in towns and cities across Britain.

The decision to prorogue Parliament prompted an angry backlash from MPs and opponents of a no-deal Brexit.

When Parliament is suspended, no debates and votes are held. This is different to “dissolving” Parliament – where all MPs give up their seats to campaign in a general election.

If this prorogation happens as expected, it will see Parliament closed for 23 working days.

Critics view the length and timing of the prorogation – coming just weeks before the Brexit deadline on 31 October – as controversial.

He said: “It’s quite usual this time of year for Parliament to go in to a recess. It’s perfectly correct and appropriate to prorogue Parliament.

“I think it’s absolutely right that this prime minister and his government get the chance to set up their agenda.”

Protests in towns and cities

Journalist and activist Owen Jones, who will speak at the London protest, said: “This is about defending democracy.

“We have an unelected prime minister shutting down the elected representatives of the British public who are supposed to be scrutinising the biggest upheaval since the end of the war.

“I think people who voted Remain or Leave should take to the streets today – no one voted for a no-deal Brexit.

“There will be Remainers [at the protests] but I’ve had Leavers get in touch with me and tell me they will be marching, too.”

As well as outside Downing Street, protests are being planned in more than 30 towns and cities, including Edinburgh, Belfast, Cambridge, Exeter, Nottingham, Manchester, Glasgow and Birmingham.

Named “Stop the Coup”, the protests are organised by anti-Brexit campaign group Another Europe is Possible.

The group also says there are protests planned in Amsterdam, Berlin and the Latvian capital Riga.

The Jo Cox Foundation, which was set up in the wake of the Labour MP’s murder in 2016, warned that anger over Brexit “should not spill over into something more dangerous”.

Meanwhile, a petition against the prime minister’s plan to suspend Parliament has received more than a million signatures.

And on Friday, former Tory Prime Minister Sir John Major announced he will join forces with anti-Brexit campaigner Gina Miller to oppose the decision to suspend Parliament in the courts.

He believes Mr Johnson’s move to suspend Parliament is aimed at preventing MPs from opposing a no-deal Brexit.

The prime minister has dismissed suggestions that suspending Parliament is motivated by a desire to force through a no deal, calling them “completely untrue”.

Foreign Secretary Dominic Raab said: “The idea this is some kind of constitutional outrage is nonsense.”