Demetrius Andrade Calls Out Canelo, GGG After Winning the Fight

PROVIDENCE, R.I. – Demetrius Andrade had enough. “Boo Boo” clapped his hands in frustration, placed his palms flat on the table, got up and... 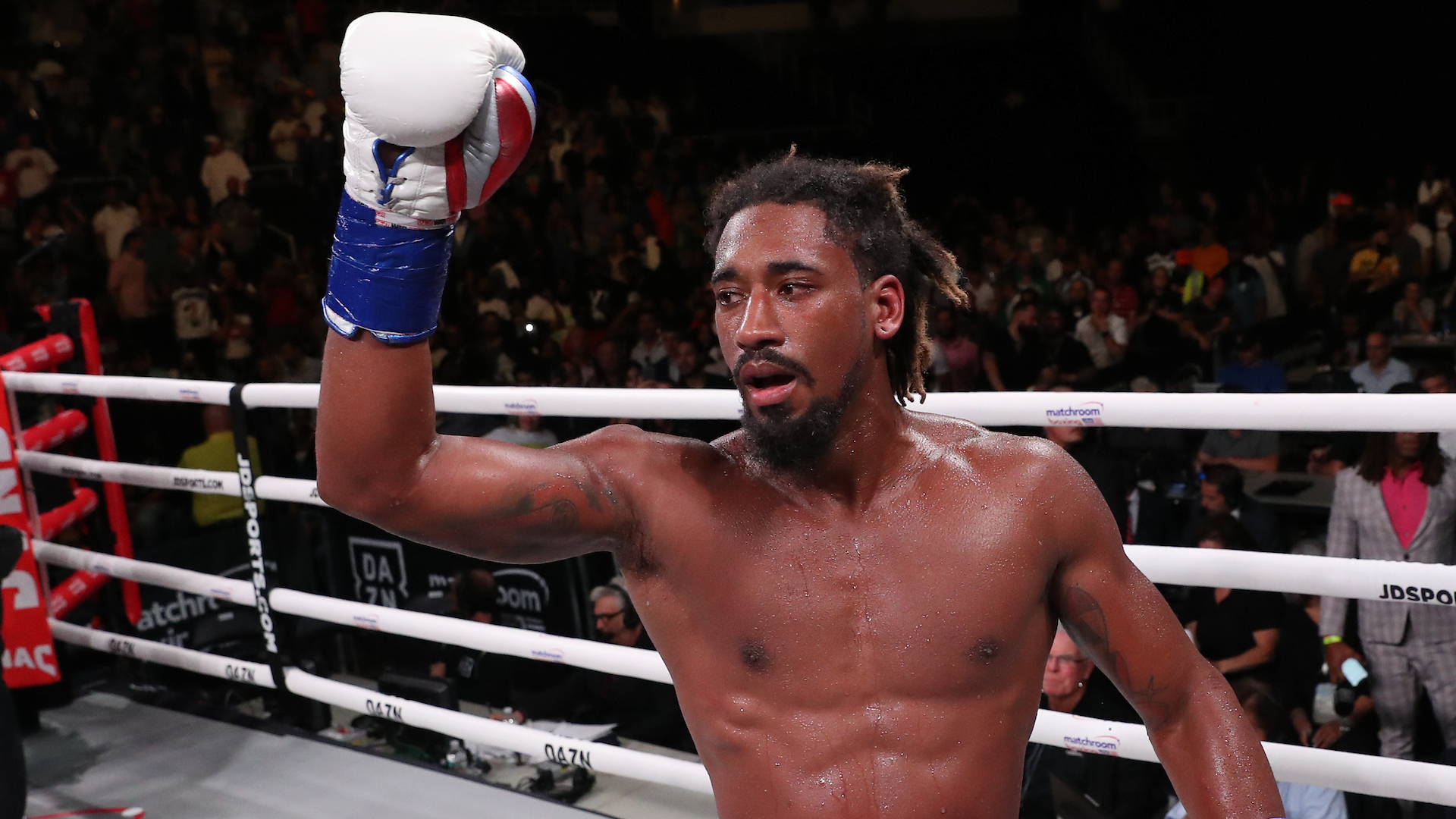 “Boo Boo” clapped his hands in frustration, placed his palms flat on the table, got up and yelled to make sure his message was received.

If it were only that easy.

With that said, Andrade ended his post-fight press conference abruptly and to exited Dunkin Donuts Center.

Just a short while prior to that moment, Andrade had delivered a dazzling first-round knockdown and thoroughly dominated Maciej Sulecki, winning every round of the fight for a lopsided unanimous decision (120-107 on all three judges’ scorecards) to retain his WBO middleweight title. Fired up after the win, Andrade (28-0, 17 KOs) called out IBF/WBA middleweight champ and the face of boxing, Saul “Canelo” Alvarez right there in the ring.

“Sulecki is no pushover. He ain’t no Steve Rolls, ain’t no Rocky Fielding,” Andrade said during his post-fight interview, referring to recent sub-par opponents of Gennadiy Golovkin and Alvarez, respectively, to his hometown of Providence’s delight. “So, Canelo, where your cojones at? Let’s get it.”

Sure, it sounded great in the moment, but as Andrade sat in the bowels of the Dunk, fielding question after question, his jubilation waned and a degree of harsh reality set in.

Andrade can call out Canelo or GGG for a fight all he wants. Although either fight seems unavoidable, – as Sporting News even wrote about earlier in the week – unavoidable can be laden with delays. That seems to be the case here.

“It’s going to be hard to avoid [Andrade] and we need the support of the media, fans and DAZN,” Matchroom Boxing promoter Eddie Hearn said, sitting to the champ’s right during the post-fight press conference. “He’s going to put pressure on me, I’m going to put pressure on DAZN to say ‘We’re the home of the middleweights, but we know you want GGG against Canelo. But if Canelo fights [Sergey] Kovalev, why don’t we fight GGG and then the winners come fight the winners.”

At the time, Canelo owned three out of the four middleweight world titles, with only Andrade owning the missing piece, the WBO strap. (Since then, the WBC upgraded Jermall Charlo to its official champion, relegating Alvarez to its “franchise” champion.)

“By Oscar saying that, it’s like, ‘We’re not fighting him, you go fight him,'” Hearn told Sporting News following the post-fight press conference. “But it does make sense. If Canelo is going to fight Kovalev and Demetrius fights GGG and the winner fight the winner.”

But Hearn doesn’t sound confident that will happen.

“To be honest, if I was promoting Canelo or GGG,” he said, “I probably wouldn’t take the fight (with Andrade).”

Now, the latter could be chalked up to promoter posturing and psychology, but earlier in the same post-fight press conference, Hearn explained why he feels that’s the case, painting the situation as a lose-lose scenario for Canelo.

“You can’t hand-on-heart sit there and say Canelo beats Demetrius Andrade,” Hearn said. “I don’t believe anybody in boxing would say, ‘Yeah, he beats him, 100 percent.’ When you’ve got a fighter like Canelo, do you want to put him in a fight like that, where you’re unsure if he’s going to win? I think they’d be more confident going into a GGG fight than going into a Demetrius Andrade fight.”

Canelo did successfully walk down Golovkin in their rematch last September and although some critics still feel like GGG won, the face of boxing had his hand raised. He’s also 28 to Golovkin’s 37.

The 30-year-old Andrade represents a different equation. While many would argue that he doesn’t have the power to match up with Canelo, he is highly-skilled and would bring a height and reach advantage into the ring as a southpaw. That could stifle the Mexican superstar and possibly even make him fight a style of fight that he doesn’t want to in their unification bout.

But if Canelo does indeed go with Kovalev for his September fight, Golovkin could very well choose another opponent – one that’s safer than Andrade – in attempt to preserve the trilogy fight with the face of boxing. That would further delay and spurn Andrade’s quest to get a crack at either fighter.

Such a scenario had reporters even asking Andrade about the prospects of moving up in weight to super middleweight and taking on his good friend Daniel Jacobs or Callum Smith in London.

“There’s Billy Joe Saunders if I decided to go up to 168 [pounds],” Andrade told reporters.

The two were originally supposed to fight last October, before Saunders failed a drug test and was forced to vacate his WBO middleweight title, which Andrade claimed by defeated South African Walter Kautondokwa.

“He deserves a beating from me.”

“We don’t have to keep increasing weight,” Paul Andrade said, while Demetrius looked down at the table to his right. “We have a weight where he is the greatest at and that’s the weight we’re going to stay at.”

Hearing his dad saying that and perhaps realizing that touching Canelo and GGG is still going to be a lengthy waiting game led to Andrade’s eruption, imploring the media to do its job and walking out of the post-fight press conference.

“My job is to keep winning, getting in the ring with the likes of, of course Canelo, GGG,” Andrade said.

“I’d like to put my skills and talent against these guys,” he continued. “What I can only do is keep crossing out names.”

“Sulecki,” he adds, making a cancellation sound effect, using his index finger and thumb as if he’s holding a pen. “Artur [Akavov], Walter. It’s like how many?!”

You figure that if “Boo Boo” keeps winning, he’ll eventually land that shot at a Canelo or GGG – perhaps even with a better chance than Charlo, considering the frigid relationship between PBC and Matchroom.

But the question for Andrade is when?