COLOMBO (DPA) – The death toll from the Easter Sunday suicide bombings in Sri Lanka has risen to 359 after more of the victims... 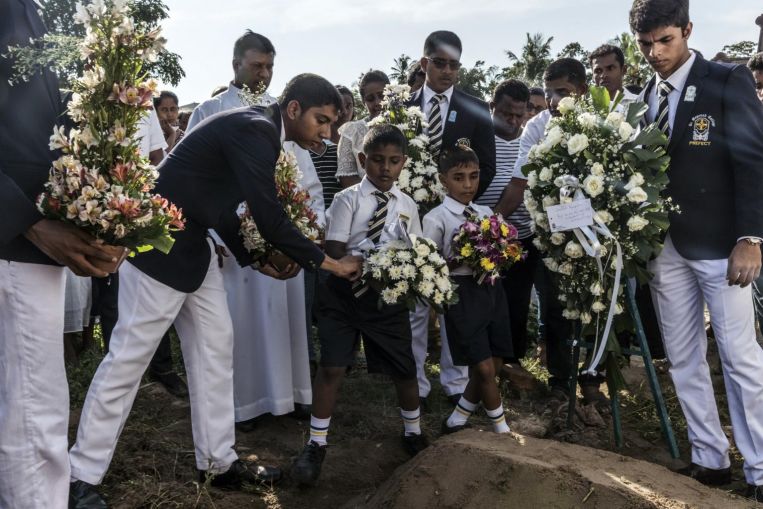 COLOMBO (DPA) – The death toll from the Easter Sunday suicide bombings in Sri Lanka has risen to 359 after more of the victims died of their injuries, police said on Wednesday (April 24).

More than 400 people remain in hospital, with some in critical condition.

More funerals of those killed in the attacks were also due to take place on Wednesday under tight security conditions.

Another 18 people were arrested overnight in connection with the attacks on churches and luxury hotels, bringing the total number of those detained to 60, police added.

On Tuesday (April 23), Prime Minister Ranil Wickremesinghe had warned that several suspects were still at large, while police said they were searching in Colombo for a lorry and a van fitted with explosives that had been identified in an intelligence report.

The alert for the vehicles was still in place on Wednesday morning.

President Maithripala Sirisena also vowed to make immediate changes to the leadership of the security forces amid allegations that they failed to act on prior intelligence about possible attacks.

Both Mr Sirisena and Mr Wickremesinghe have said they were not informed of the intelligence reports.

Parliament is to meet later on Wednesday for a debate regarding the current situation.

The Islamic State in Iraq and Syria (ISIS) group has claimed responsibility for the bombings and Deputy Defence Minister Ruwan Wijewardene has said they were believed to have been carried out as revenge for the deadly attack on a Christchurch mosque last month.

But New Zealand Prime Minister Jacinda Ardern’s office said on Wednesday it had not seen any intelligence to link the two attacks.

Sunday’s (April 21) explosions took place during busy Easter services at Christian churches in Negombo, Batticaloa and Colombo, and in three five-star hotels in the capital.

The Foreign Ministry said 34 foreigners killed have been identified and 14 remain unaccounted for.