Conditions in the Hamas-ruled enclave are driving many to leave for other countries Tamer Fathi al-Sultan, 38, a husband, father, pharmacist and prominent political... 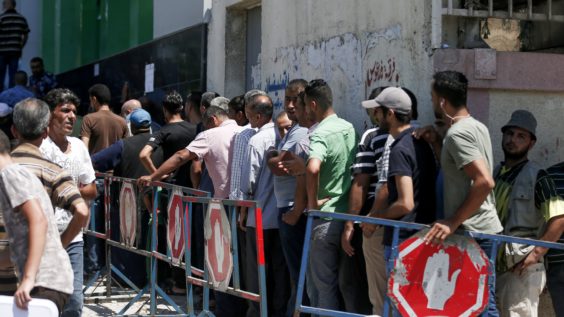 Tamer Fathi al-Sultan, 38, a husband, father, pharmacist and prominent political and social activist in the Gaza Strip, fled the impoverished Palestinian enclave in search of a better life, only to die during the journey.

In a phone conversation, his father, who asked that his first name not be used, told The Media Line that Tamer’s mother and wife were heart broken.

“He was a human being who loved all people. He sympathized with everyone. The poor and needy. He campaigned for their rights,” the elder al-Sultan said, adding that, “Tamer was suffering from the situation in Gaza as a result of the internal Palestinian divisions and the Israeli blockade, which suffocated us. He could not bear it here anymore.”

Tamer left Gaza in April with the hope of a starting anew elsewhere. He was aiming to send for his wife and two boys Wissam, 7, Fathi, 6, as well as daughter Mira, 1 ½, once he settled in a new country.

“He left for Egypt, then Turkey and his final destination was Belgium, but he could not get there,” said Tamer’s father. “He died in Bosnia and Herzegovina. We don’t know what happened, whether he was injured on the way, or stung by insects or scorpions. So far, we do not know the real cause of his death.”

According to Tamer’s friends, he was a staunch critic of Hamas, the Islamist group that has ruled Gaza since 2006, and took part in protests earlier this year against the Gaza rulership’s economic policies.

Hamas claimed al-Sultan was one of the leaders of the demonstrations. He was among hundreds of Gazans to be arrested.

Tamer’s Gaza-based friend Mohammad told The Media Line on condition of anonymity hat after being arrested and then called in for interrogation several times, al-Sultan decided to depart the Palestinian territory.

“He wanted to fight from abroad, he couldn’t take the humiliation from Hamas on one side and the Israeli siege on the other. He had no problem criticizing those behind the dire situation in Gaza,” Mohammad said.

Tamer is just one of thousands of young and educated Palestinians who are eager to leave Gaza. With a lack of job opportunities, and the absence of hope, many see emigrating as the only way forward.

In an interview with The Media Line, Haytham Abu Warda, a 26-year-old accountant who is married and has an infant daughter, called Gaza an “open-air prison.

“We have few work opportunities,” he explained. “If and when you find a job, the salaries are extremely low, and come with unfair terms. Add to that favoritism. It’s almost impossible to find a job if you don’t know someone. All these things will destroy you, shatter you inside and out before you even start.”

Since graduating more than three years ago, Abu Warda has had two jobs. Mostly, he has volunteered at government institutions in Gaza to build up his resume.

“Just like many newlyweds here in Gaza, when you run out of cash, you reach for your wife’s gold. I sold some of it to pay my debts. I live with my family and they still help me,” he said, while noting his additional receipt of $400 in financial aid from Qatar.

“All this is forcing me to leave. It’s the only answer for me right now,” Abu Warda stressed.

Israel and Egypt have imposed blockades on Gaza, and the Palestinian Authority has sanctioned the enclave in an attempt to force its adversary Hamas to give up control.

Many, including the United Nations, consider these measures “collective punishment.”

Abu Warda has several relatives who have already left Gaza, some for Sweden, where he wants to go, others for Turkey and Saudi Arabia. “Almost half of my family emigrated,” he said. “They have improved their situation and are having a decent life.”

Abu Warda noted that most Gazans are not asking for much. “We want to secure a place to live, food, clean water and electricity for our families. These are things that are taken for granted elsewhere but we desperately lack. If the main basic needs for humans to live and survive aren’t available, what’s left to keep us here?”

Dr. Mohamed Abo Alqomboz, who works at a hospital in Gaza, told The Media Line that he wants to emigrate legally. “We are all obsessed with the idea of ​​​​leaving. I am a doctor and I need to advance professionally and secure the basics of life.”

A newlywed with no children, Alqozmoz said that many of his colleagues feel the same way.

“We get low salaries, there is no room to learn and advance, medical staff suffers from shortage of medicines and lack of equipment.”

A critic of Hamas, Alqozmoz said he was penalized for denouncing its policies. “I was oppressed and harassed by Hamas because I do not shut up. I speak and dare to express myself about what is happening. This frustration,” he continued, “affects the work of doctors. I am criticized by Fatah [the dominant faction in the PA] and equally by Hamas. I’m not organizationally affiliated. I criticized Hamas for being the ruling party. But the PA is also pursuing a degenerate policy towards Gaza.”

Worried about a shortage of doctors, Hamas has stopped issuing them travel permits. “Medicine in Gaza is run by Hamas and has its own agenda,” said Abu Warda. “There is no room to breathe and exercise freedom of expression.”

Abu Warda described life in Gaza as a depressing song that keeps playing in a loop “Life is monotonous here. I wake up in the morning, go to sleep at night, and then wake up again. This routine is a killer. There is no horizon to look forward to. I feel hopeless.”

The death of Tamer al-Sultan has refocused attention on the plight of Palestinians living in Gaza.

“All Tamer wanted is to have a dignified life for him and all Palestinians. If the price for achieving that is my son’s life, then it’s worth it,” his father concluded.