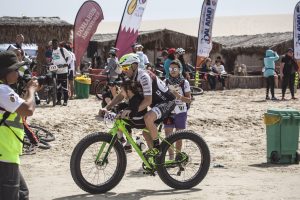 The fourth edition of Al Adaid Desert Challenge has once again achieved huge success, as 530 participants from 51 different nationalities took part in cycling and running races on Friday across the scenic areas of Khor Al Adaid, one of Qatar’s most beautiful natural area.

The turnout this year has exceeded all expectations, with the organizers had to close registration two weeks before the event, amid the rapid increase of mountain cycling popularity in Qatar and an unprecedented participation of more than 50 cyclists who came from all over the world to take part in the event organized by Qatar Cyclists in cooperation with the Qatar National Tourism Council (QNTC) and the support of the Ministry of Culture and Sports and the Qatar Cycling Federation, in addition to a list of sponsors that include gold sponsors Doha Insurance Group, Doha Takaful and Ooredoo, and official supporters Chevrolet Qatar, Rasen Sports, Al Rayyan Water, Doha Bus, Garmin Lingawi, Mawater Qatar, Royal Riviera Hotel Doha, Qatar Red Crescent, Dama Sports Wear and St. Regis Doha Hotel.

The organizing committee has allocated more than 180,000 QAR for the top finishers of the various races in this year’s edition.

More than 300 participants took part in the multi-category cycling race, among them cyclists who traveled from countries like Great Britain, France, Australia, Italy, Ireland, and Iran, especially to take part in the event.

The highest category of the cycling race in Aldaid was the UCI Elite which is recognized by the International Cycling Union (UCI) as an XCP-C3 race and it offers the highest total prize money in the world in its class. Frederic Gombert of France completed the 38.5 km cycling race – which included the tough task of crossing seven sand dunes on the way to the finish line – in 1:34:52 h, less than a minute ahead of Iran’s Faraz Shokri, while Serbia’s Alexander Roman took third place.

“The race was harder this year, but I have adapted well and the experience I have gained over the past two years made the difference today,” said Gombert.

“I am always keen on taking part in this challenge to enjoy the good weather in Qatar during this time of the year compared to Europe, I am getting ready for some tough races in France this season and I like to explore different countries while taking part in races around the world. Khor Al Adaid is an area with a unique nature. I also like the fact that race allows me to compete against cyclists from many different nationalities, plus of course the prize money this year, which was good.”

The women’s elite category saw Finland’s Pia Sundstedt winning her fourth title in a row after completing the race in a time of 1:54:49 h, ahead of Qatar’s Tala Abujbara and Lebanon’s Marwa El Hage.

“I am happy to win again, but this was definitely the toughest edition ever, due to the windy and dry conditions. The organization was again excellent. The marking was clear all along the route and the support team was always close to the cyclists and offering water, food, and assistance if needed. Then, in the finish line camp, the atmosphere was wonderful, and we spent a beautiful day meeting with cyclists from all over the world,” said Sundstedt. 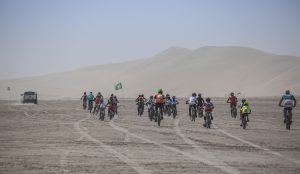 Qatar’s Tala AbuJbara achieved a time of 2:34:41 h, which gave her the title of the National MTB Cross-country Championship, while her sister Amira AbuJbara finished second, as the third place went to Muneera Al Kuwari.

It was a historic day for women sports in Qatar, as three female cyclists competed in the event for the first time, and the results achieved by Qatari cyclists this year highlights the promising future of this sport in the country.

“The race was tough today. The strong wind made the second half of the race extremely difficult. There were also many places where the sand was too soft to ride, so I spent a lot of time off the bike. Running in the sand took a lot of energy. Despite all the challenges, the sun was shining, the temperature was perfect, and the desert was beautiful. It was very cool to compete beside professional cyclists from around the world who travel all the way to Qatar to test themselves in our desert!” Tala said.

“I was happy to finish first, but for me, our race today was not about winning. It was about showing what Qatari women can do in this sport. I was so happy to have three Qatari women competing today. It is a big achievement and I hope this inspires other local women to compete with us in the future. I want to say a very good job for my sister, Amira Abujbara, who had a fantastic race today. It was her first cycling race ever and she competed very well. I also want to congratulate Muneera Al-Kuwari, who displayed true determination to complete the challenge. I am so inspired by her. She was so mentally strong and did not let anything stop her from finishing the race. She is a warrior. Thank you also to the organizing committee and the sponsors for making this event possible,” she added.

“This is my second participation in Al Adaid Desert Challenge, the last time I took part, the conditions were easier as it rained before the race, but today it was really tough, with the strong winds and dry sand crossing the dunes was a massive challenge, and I had to organize my effort properly. I thank everyone who helped to organize this amazing event, they worked really hard to support us during the race,” said Al Jalham, who competed for Rasen Sports Team and currently leads the national mountain bike league with three wins in the previous four stages.

The 28-year-old Qatari cyclists are training five times per week to get ready for a series of international races this year with the national MTB team.

“Cycling in Qatar has developed significantly in recent years thanks to the efforts of the Qatar Cycling Federation and the high level of competitions they organize. I am currently getting ready to participate in a race in Croatia after less than two months, and it will be followed by other tough races including one in Turkey and the Arab Championship in Tunisia,” he added.

In the Fat bike category, Qatar’s Hamad Al Jaaidi won a first place after a thrilling race, reaching the finish line in 2:04:46 h, ahead of Iran’s Vahid Fallahi and Jumel Justo of the Philippines, who finished second and third respectively.

“It was a nice race, competing against all these international riders was a unique experience, and winning first place will give me a lot of enthusiasm to achieve more good results in the future. I would like to thank all my colleagues at Qatar Cyclists for organizing another wonderful edition of Al Adaid 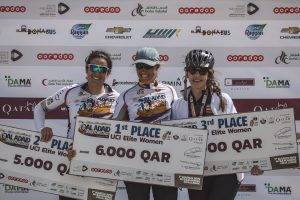 Desert Challenge,” said Al Jaaidi, who has plenty of experience in this sport, as he also won first place in the Fatbike national championship category during the first edition of the challenge in 2016.

In the women’s Fat bike category, Maricar Estacio of the Philippines won the title after completing the race in 3:25:12 h, as her compatriots April Joy Frange and Christine Llegos finished second and third respectively.

Britain’s Tom Whateley won the title of the MTB category with a time of 1:52:42 h, as Australia’s Glenn Bull took second, and Argentina’s Andres Del Valle came in third.

A kids’ race was also organized near the finish line at the Doha Bus Desert Adventure Camp, where children aged between 7 and 15 had a chance to learn more about mountain bikes as their family members cheered them alongside the route. It aims to further promote this sport in Qatar, where it is already making rapid progress.

In the running race, where more than 200 participants had to cover a distance of 26.7 km crossing four sand dunes in the process, Morocco’s Abderrahim Ghayour won first place in the open category after completing the race in 1:41:21 h, more than three minutes ahead of Qatar’s Mohcine Zaytouni who came second, and Morocco’s Ahmed Sebbar who finished third.

Meanwhile, it was an all-British podium in the veterans’ category, as Andrew Jones won the title ahead of his compatriots Steven Baker and Andrew Buckley, who finished second and third respectively.

Dr. Jamal Rashed Al Khanji, Managing Director of Al Adaid Desert Challenge commented “The success achieved by Al Adaid Desert Challenge today exceeded all expectations. We thank all the sponsors and supporters of this event, without them, it would have not been possible to achieve all this. The event broke all records this year in terms of the number of participants and international cyclists, in addition to the total prize money. The popularity of cycling in Qatar is rapidly increasing, thanks to supporting to our wise leadership. The participation of his Highnesss the Amir Sheikh Tamim bin Hamad Al-Thani in Qatar Cyclists’ ride during the national sports day last year was very influential and it encouraged more members of our society to take on this sport.”

“We are planning to expand Al Adaid Desert Challenge next year, to move it to a higher UCI category, may be by making it a three-day event, which will attract more international cyclists to come to Qatar to participate in the race and enjoy this unique adventure in one of the most beautiful natural areas in the world,” he added. 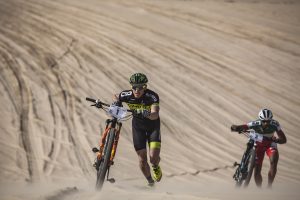 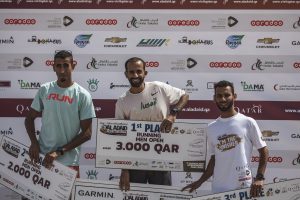