By Zinyange Auntony, AFP /Chimanimani, Zimbabwe More than 100 people have died and many more are missing as of yesterday in Mozambique and neighbouring... 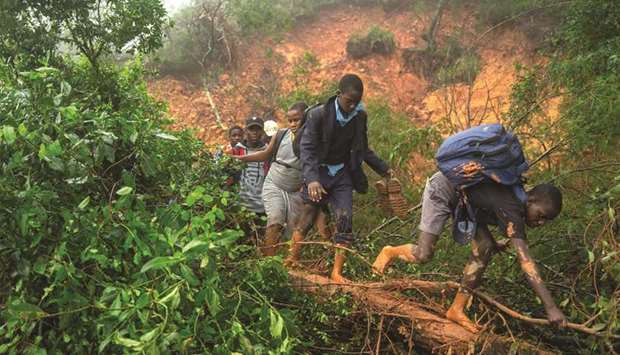 More than 100 people have died and many more are missing as of yesterday in Mozambique and neighbouring Zimbabwe after tropical cyclone Idai barrelled across the southern African nations with flash floods and ferocious winds.

Authorities in Zimbabwe said the toll there had risen to 65 in the east of the country, while Mozambique said 48 people were killed in affected central areas, after the cyclone tore across the region on Friday and Saturday.

A member of parliament for Zimbabwe’s Chimanimani district — the worst hit part of the country — yesterday gave the updated toll and added that scores remain missing, after houses and bridges were washed away by flash floods when the storm slammed the area.

The most affected areas are not yet accessible, while high winds and dense clouds have hampered military rescue helicopter flights.
“So far we looking at 65 people that have lost their lives,” Joshua Sacco, lawmaker for Chimanimani, told AFP by phone.
“We are looking at probably 150 to 200 people missing,” he said.

The majority of those unaccounted for are thought to be government workers, whose housing complex was completely engulfed by raging waters.
Their fate is currently unknown because the area is still unreachable.

“We are very worried because all these houses were just suddenly submerged under water and literally washed away and that is where we have about 147 missing,” he said. “It’s very sad and the situation is dire.”

Two pupils at a secondary school were among those killed, after a landslide sent a boulder crashing into their dormitory, the country’s Department of Civil Protection (DCP) said.

Soldiers yesterday helped rescue nearly 200 pupils, teachers and staff who had been trapped at the school in Chimanimani.
The group had to wade through waterlogged and mud-churned roads for some 4km to reach a relief area, where they were given food and checked by medics, according to an AFP photographer.

Tents have been set up to provide shelter for those affected by the cyclone and scores of villagers have made their way to the relief area, some having trekked for up to 20km to reach safety.

Roads have been swallowed by massive sinkholes, while bridges were ripped to pieces by the flash floods, according to the AFP photographer.
The United Nations in Zimbabwe said that nearly 10,000 were affected by the cyclone.
Zimbabwe’s President Emmerson Mnangagwa, who cut short a visit to Abu Dhabi over the cyclone, has declared a state of disaster in the affected areas.
Government spokesman Nick Mangwana told AFP that “rescue and recovery efforts are ongoing”.

ome 300 refugees who were housed at Tongogara Refugee Camp in the southeast have been affected and 49 houses damaged.
In neighbouring Mozambique where the cyclone hit first on Thursday night, the country’s state-owned Jornal Domingo newspaper reported 48 people had been killed, with the deaths recorded in the worst-hit central Sofala province.

Tropical cyclone Idai battered central Mozambique on Friday, cutting off more than half a mn residents of the port city Beira.
Beira international airport was briefly shut after the air traffic control tower and navigation equipment were partially destroyed by the cyclone.
The airport reopened yesterday with flights taking off from the capital Maputo bound for Beira.

An AFP journalist on a flight to Beira said most passengers were going to check on their families who they haven’t heard from since the cyclone struck.
Portuguese businessman Luis Leonor, 49, who owns a software company in Beira, told AFP while waiting to board the flight in Maputo that he had spoken to his wife via satellite phone on Saturday.

“She is fine. My house is fine but there’s no more running water. I don’t know what I will find there,” he said.
“My five employees lost their houses, they are staying at our offices.”

President Filipe Nyusi, who cut short a working visit to eSwatini, was expected to fly to Beira.
Even before the cyclone made landfall on Friday, heavy rains earlier in the week had already claimed 66 lives and forced 17,000 people from their homes in Mozambique, local officials said.